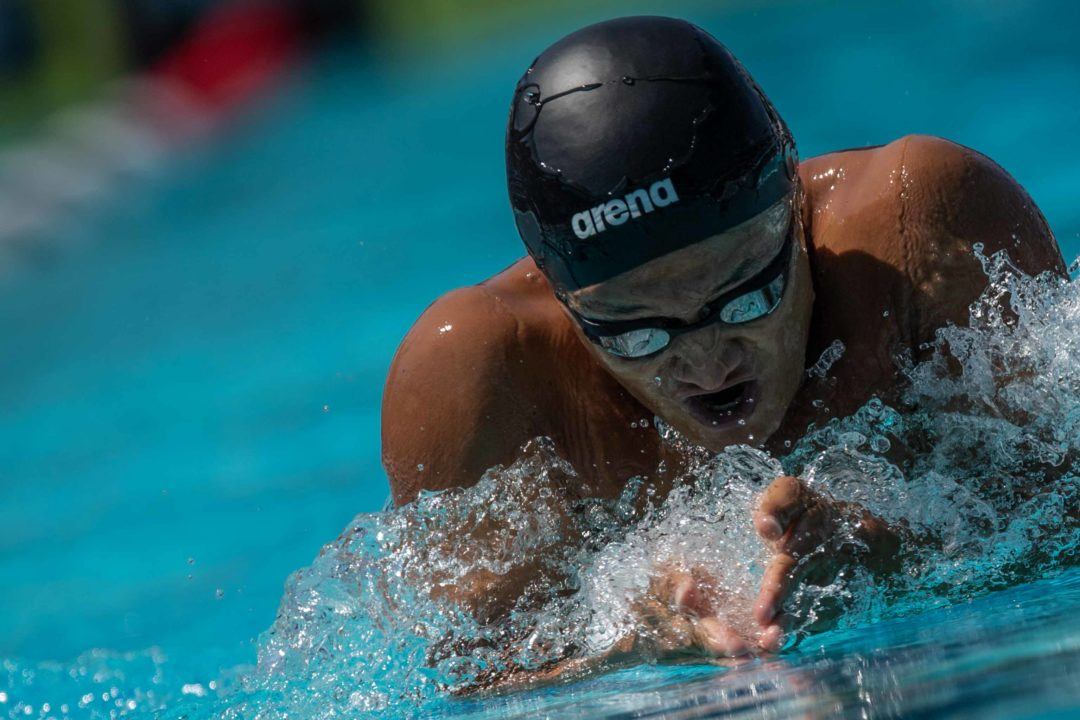 Daniel Roy was one of six Team USA swimmers to earn the top seed heading into tonight's finals on the second day of the 2018 Junior Pan Pacific Championships.

First up was Weiss, who dropped 0.38s from her seed time to set a new meet record in the women’s 100 breast.  Her time of 1:07.61 from this morning eclipsed fellow American Zoe Bartel‘s time of 1:07.82 from 2016.  The junior world record belonging to Ruta Meilutyte still stands at 1:05.39.  Weiss’s time was a full second faster than the next fastest time of the morning, a 1:08.81 that belonged to Canada’s Nina Kucheran.

Next, Foster set his second NAG of the meet, crushing a 4:14.92 that was the fastest time in the field by a full five seconds.  Thanks to a quirk in how FINA has counted junior world records, Carson is now within a second of the meet record, a 4:14.00 from Sean Grieshop two years ago, but much further off of the meet record, which is Chase Kalisz’s 4:12.59 from 2012.  Carson’s brother Jake Foster took the second spot for Team USA in tonight’s final, finishing 4th overall, while a pair of Japanese swimmers, Keiya Tamaru and Masayuki Otake, had the 2nd and 3rd fastest times of the morning, sandwiched between the two Foster brothers.

One day after USA swimmers took the top two spots in five of the six events, that only happened in the men’s 100 free and women’s 400 IM this morning.  Still, American swimmers will be in lane four in each of tonight’s six individual events.  Both men and women will also swim the 4×200 free relays tonight as well.

Other notes from Day 2 Prelims:

Very exciting relay for women. 4×200. Pallister beat Tuggle this time – they both did first leg.

I guess somebody from SwimSwam overslept. No finals live recap. Mens 200 free relay was 0.01s off the Wjr.

Watched the final: terrific backstroke split from Carson Foster, and he has the toughness to be a great Imer also at senior level.
Anyway, many young Imers for Usa Swimming (the Foster br., Urlando, Heasley).
Watched also the women 400 Im and swimming Mariah Denigan for the first time. I’ve understood why she wasn’t a main story for Swimswam staff northeless her impressive entries/age ratio.
Anyway she has great stamina indeed; we’ll see if in the future her swimming will be more relaxed and efficient.

Also very impressed by Jake Foster’s 1:09/58 back half. Will be some good battles between both Foster brothers in the future, Carson needs to improve his Breast and Jake his Back.
Also Emma Weyant was very impressive, came into the season with a best time of 4:53 and just won Jr Pan Pacs gold with a 4:40.
Both Walsh sisters had some good relay splits, Gretchen with a flying start 1:59 and Alex (on the B) with a flat start 2:00.

I miss the usual session summary article with records, times, lines through those who get bumped, etc.

Wouldn’t surprise me if Tuggle scratches the B final as the 4×200 relay comes only two events later.