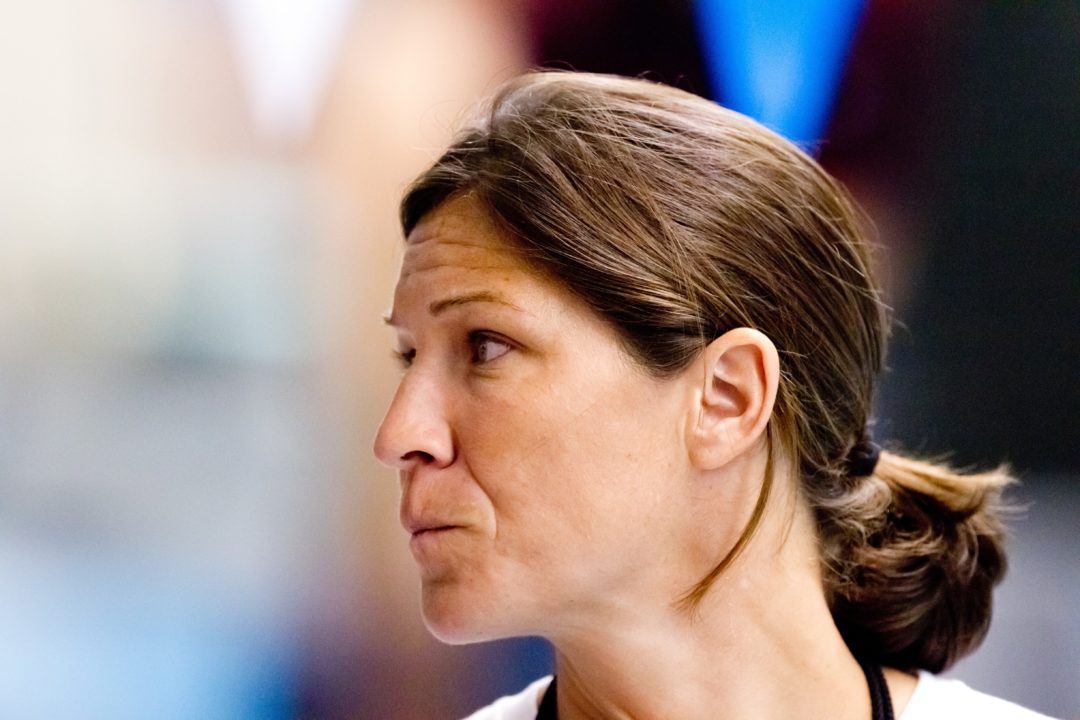 Lea Maurer coached the Stanford women to an NCAA runner-up finish in 2010 before resigning at the end of the 2011-2012 NCAA season. Archive photo via Tim Binning/TheSwimPictures.com

Jeremy Kipp has added one more name to the newly-constructed swimming & diving coaching staff at USC, and it’s a big one in Pac-12 circles.

Lea Maurer has been named the program’s new associate head coach. Maurer, a 1992 Olympic gold and bronze medalist and 1998 World Champion, was the head coach of the women’s program at Stanford from 2005 through 2012. During her time there, she led the program to 7 consecutive top 5 finishes at the NCAA Championships and back-to-back Pac-10 titles in 2010 and 2011.

In total, her swimmers won 13 NCAA event titles, 37 conference event championships, and 163 All-America honors. The Stanford women were 66-5 in dual meets while Maurer was the head coach.

Among the individual talents she coached included Elaine Breeden and Julia Smit, who combined to win 3 relay medals at the 2008 Olympics, in addition to coaching names like American Record holder Tara Kirk.

Stanford finishes at the NCAA Championships under Lea Maurer‘s Tenure:

Maurer resigned from Stanford in 2012 to “spend more time with her family,” but she wasn’t away from the pool deck at the Avery Aquatic Center for long. Since 2013, she has served as a volunteer assistant with the men’s water polo team at Stanford. The Stanford men’s water polo team is the defending NCAA Champion.

Kipp has now announced 3 assistant coaches on his swimming staff at USC. That’s as many as the school carried under the prior staff led by Dave Salo, who resigned at the end of last season, though it’s one short of the NCAA maximum.

As an athlete, Maurer won an Olympic gold medal at the 1992 Games as the leadoff leg of the American women’s 400 medley relay. She also took a bronze medal that year individually in the 100 back.

After retiring, she became an assistant coach at Northwestern (which was Kipp’s last stop as head coach before USC). From 1995 through 2005, she coached the boys’ and girls’ swim teams at Lake Forest High School. There, she led the girls’ team to State Championships in 2002 and 2003 and the boys’ team to a state title in 2003. Among the swimmers she coached there were eventual Olympic gold medalist Matt Grevers.

Maurer is married to Erik Maurer, who is also a former Stanford swimmer, and their son Luke is committed to begin his college career competing for the Cardinal this fall.

In February, the Trojan women finished in third place with 1,212 points, just 12.5 points behind Cal, the 2019 NCAA runner-ups, for the title. The USC men finished last at the 2020 Pac-12 Championships.

Lea Maurer going to USC is like Jim Harbaugh becoming an assistant coach at Ohio State!

This is an impressive hire! Fight On Lea ✌️