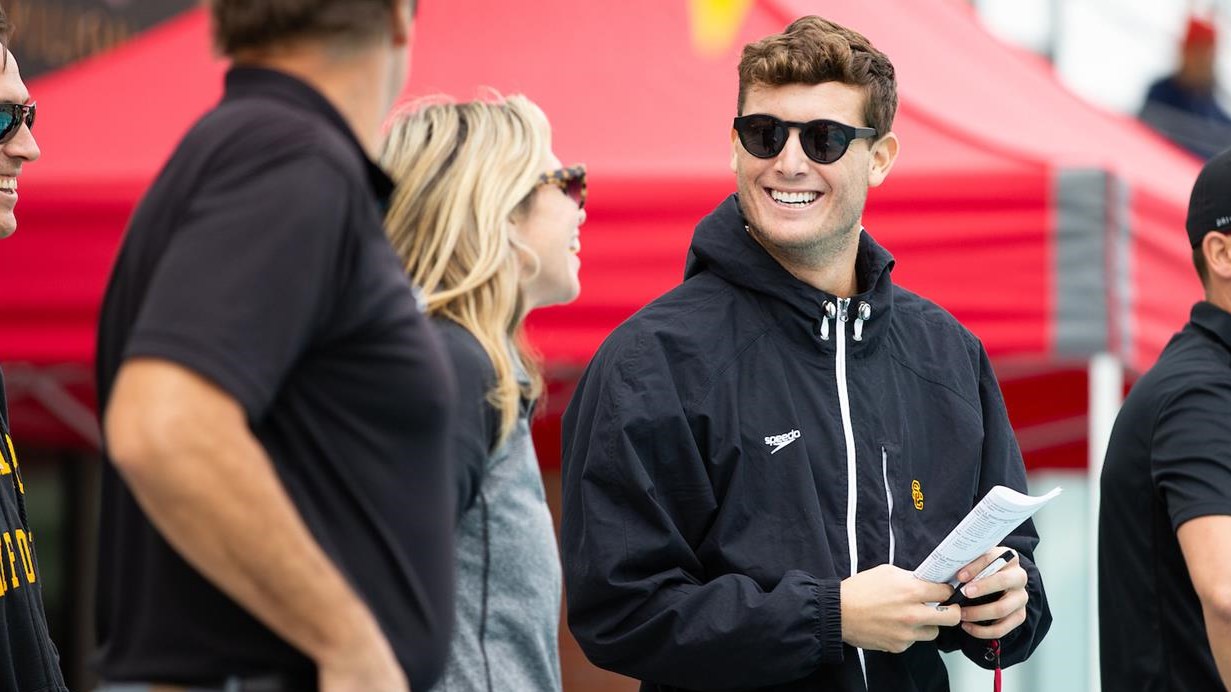 Bloch is the 2nd USC alumni to be named to the new coaching staff of first-year head coach Jeremy Kipp this offseason.

USC announced on Friday evening that they will retain Chase Bloch as a member of the swimming & diving coaching staff under new head coach Jeremy Kipp. Bloch, who has been an assistant coach for 6 seasons, will continue in that role under Kipp, joining Meghan Hawthorne on staff. Hawthorne, who like Bloch is a former Trojan swimmer, came with Kipp from Northwestern.

This leaves one available full-time assistant position on the USC staff available. 2019-2020 assistant Jordan Schrotenboer is not listed on the team’s roster for 2020-2021.

Kipp was Bloch’s coach while Bloch was a swimmer at USC, and the two overlapped on the USC coaching staff for one season.

His All-America award came as part of USC’s 200 medley relay that placed 5th at the 2013 NCAA Championships meet in what was then a school record of 1:24.54. He swam the butterfly leg of that relay and split 20.71, which was the 11th-fastest split in the field (between A and B finals). That was the relay where Vlad Morozov famously split 18.23 on the freestyle anchor leg, which at the time was the best split in history.

Bloch is a native of Westlake, California where he attended Oaks Christian High School. He graduated from USC in 2014 with a degree in communications.

I’m glad Kipp decided to retain Bloch if for no other reason than to retain some continuity on the Trojan swim staff. But candidly, recruiting has been one area where the Trojans have “struggled” in recent years. Trojan recruiting – especially for men” has been “sparse” since 2015 when Trojans landed Visering, Mulcare and Valente. But since then it’s an occasional highly-recruited swimmer (Louise Hansson for women and Alexi Sancov, Jake Sannem and Robert Glinta for the men) But even the, Sannen transferred out to Texas and Glinta was one and done. Meanwhile in state rivals Stanford and Cal pile up a roster and commitment list of impressive recruits and the Trojans fall further and further behind them but also… Read more »

All true but you have to realize / remember that USC is very expensive university and there are only so many recruiting $$$ available to hand out.

The USC women have consistently been solid the last 5 years and considerably better than Arizona and ASU. Remember, they actually came pretty close to Cal at Pac-12s this year. And they have an outstanding class coming in, even without Sullivan.

The men of course have fallen on hard times.

I think you can pretty easily attribute the lack of 2021 commitments to the fact that Salo announced his retirement in January and the y did not name Kipp until recently. Things should pick up now that people know the landscape.

As a parent, I experienced a recruiting event w/ Salo. It’s no wonder their recruiting has struggled…

USC Women have had better recruiting results than men in the last few years but also 40% more scholies (14 vs 9.9) to work with. But there’s big shoes to fill now that Swedish superstar Louise Hansson has graduated. But there is the potential to “change the recruiting momentum” . USC, like other D1 private school powers including Stanford, Northwestern, Duke and Notre Dame who have the challenge of higher tuition than state schools that can divide up partial scholarships to make a more attractive matriculation package to athletes and their parents..
It can be done but coaches have to be very discerning and focused on recruiting the “blue chips”. A hot topic on football boards is the concept… Read more »

Wait I’m confused the staff is currently Kipp-Hawthorne-Bloch right? Am I missing one? You said they have one more full time swim coach staff but most places have 5 full time swim staff and 1 dive.

They can, but in recent seasons USC has carried only 4 swimming coaches. So, conceivably, they could add another, the 4 was based on what the program has had historically.

I am assuming Salo only had 3 assistants and paid each more so they could afford to live in LA?

Maybe Urbanchek as a volunteer counted as the 5th coach?

I’ve been coached by both.
Excellent coaches.
They give great direction & motivation to the program.
Especially. Coach Kipp