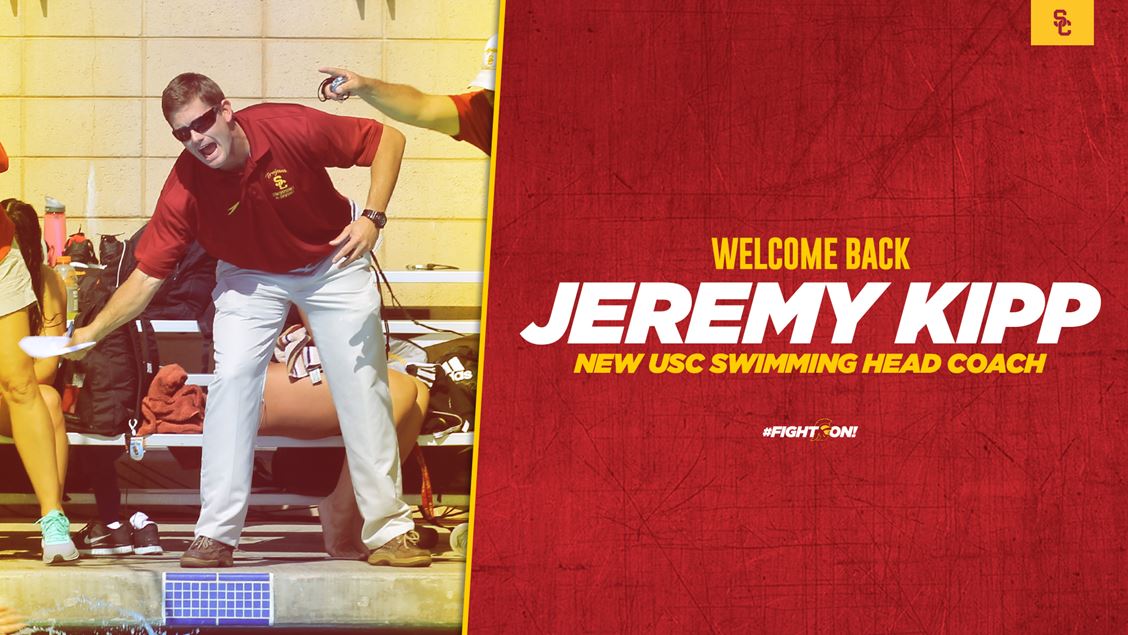 Kipp, a former assistant at USC for eight seasons, will succeed Dave Salo as the program's next head coach, sources told SwimSwam.

Northwestern head coach Jeremy Kipp is set to return to the University of Southern California to succeed Dave Salo as head coach, the school announced on Tuesday.

The news comes after weeks of rumors of this move. Kipp all-but-denied those rumors last week, repeatedly saying on a CSCAA live stream that he has “3 years left on his contract at Northwestern” and that he was looking forward to those 3 years.

The 42-year old Kipp was named the head coach of Northwestern’s coed program in May 2018 after a stint as head coach at Boise State. He previously spent eight seasons with the Trojans working under former head coach Dave Salo – three seasons as an assistant coach and five as the head assistant – from 2008-2015. Kipp’s time in Southern California culminated USC’s men winning their first Pac-12 title.

Prior to USC, Kipp spent eight seasons on staff at UC Santa Barbara. He also has international coaching experience – Kipp worked with the Polish and Austrian national teams – and served as personal coach to Olympians Markus Rogan and USC alum Oussama Mellouli.

Salo announced in January that the 2019-20 NCAA season would be his last with the program, though he would stay in town to focus on swimmers who are Olympic hopefuls. He was named Pac-12 Women’s Coach of the Year after his final Pac-12 Championships (which, due the coronavirus pandemic, ended up being his last collegiate meet). In February, the Trojan women finished in third place with 1,212 points, just 12.5 points behind Cal, the 2019 NCAA runner-ups, for the title.

Kipp’s hiring leaves longtime USC associate head coach Catherine Kase, who’s been with the program for 12 years, in an intriguing position. Many thought she was a strong candidate for Salo’s job in her own right – in addition to her collegiate work, Kase served as the United States’ head open water coach at the 2016 Olympics and will do so again in 2020. She was also head open water coach for the 2019, 2015, 2013, and 2009 FINA World Championships, as well as the 2014 and 2016 Pan Pacific Championships and 2007 Pan American Games.

Kase likely would also have been a draw for distance swimmer and 2018 high school graduate Erica Sullivan, who had deferred her start at USC to train for Tokyo. With the Games postponed, Sullivan told SwimSwam she would wait on the coaching hire to decide whether she will still attend this fall.

In open water, Sullivan finished third among Americans in the 10K at 2019 Nationals — a spot away from making the 2019 FINA World Championships team (the top 10 finishers at Worlds made the Olympic team). But recently, she has surged in the pool, putting her squarely in the running for a berth in the 1500 when it makes its Olympic debut next year.

The aforementioned Ous Mellouli, however, is an all-time great distance swimmer who racked up a slew of world and Olympic titles in long-distance pool and open water events under Kipp’s watch.

While the news of USC hiring Jeremy Kipp from Northwestern to be the new Head Swim Coach I wanted to go deeper on the future impact of the hire. There were some general comments on this SwimSwam board that Kipp was a good hire, but nothing specific. So, I wanted to give it a “second look” based on evidence. My initial reaction was not an overwhelming positive one because I thought USC current Athletic Director Mike Bohn and his 27-year old Chief of Staff Brandon Sosna had fallen into the same mistakes from previous AD’s had made – keep it in the “Trojan family” and and so make a “lazy hire” without considering all the options. In other words, opting… Read more »

Coach Kipp is awesome and the right choice to lead the Trojans to many championships. Thanks coach Salo for your program development and leadership on the men and women of Troy. Fight On!

I wonder if Burdisso sticks around.

Great move. Jump ship from a university w integrity that does things the right way to one that’s the exact opposite.
GO CATS!

Horrible for the incoming freshman at NU. I’d be soooo bummed!

Well, if ever there was a year to have it happen to them, it would be this one. Who knows when college swimming as we used to know it will return.

Considering this is happening: https://www.cbssports.com/college-football/news/ncaa-council-to-vote-on-whether-to-extend-moratorium-on-athletic-activities-past-may-31/

HAHAHAHA all that talk on that previous article. Have to read between the lines.