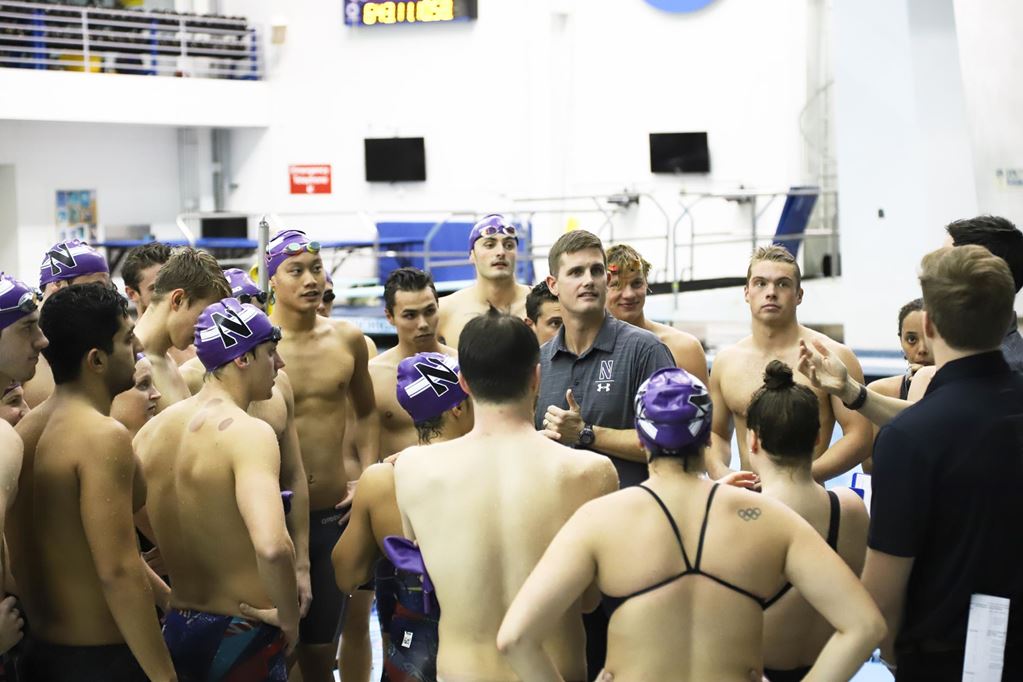 With Jeremy Kipp on his way back to Southern California, Northwestern is in the market for a new head coach. The most obvious candidate is already on campus. Stock photo via Northwestern Athletics

Entering the 2020-2021 offseason, there was only one NCAA ‘Power 5’ conference head coaching position available in swimming & diving. That was the USC job, which on Tuesday the school confirmed would be filled by Northwestern head coach Jeremy Kipp.

Overall, this is going to be a quiet offseason as compared to the last couple, largely because of the uncertainty created by the coronavirus, but there will be at least a little bit of a carousel effect as coaches move to fill in different spots.

Northwestern now becomes the new ‘biggest job’ open, thanks to Kipp’s departure. The Big Ten team, in the near-north Chicago suburb of Evanston, finished 5th at the 2020 Big Ten men’s championship, its best finish since 2007 when the likes of Matt Grevers and Mike Alexandrov were seniors with the program. The Northwestern women were 4th at Big Tens, which was their best finish since 2002.

We don’t know yet who will go with Kipp next season in terms of coaches and athletes from Northwestern. Meghan Hawthorne, a former USC All-America swimmer, has followed Kipp to Boise State and Northwestern. But, regardless of who stays, Northwestern does have some upward momentum, with a good incoming recruiting class built off the success of the last few seasons under Kipp. Those classes include names like Annika Wagner and Lola Mull. At a minimum, Kipp rebuilt belief that Northwestern could once again have a top-tier swimming program.

So who will pick up those reigns and try to continue the team down the path? It’s time for some wild speculation.

As denoted in all of these wild speculation articles, these are not reports or confirmed news. These are hypothetical discussions of who would make sense in these roles. Call it a cheat-sheet for athletics directors to look at when making their short lists.

Two of the best candidates for this job wouldn’t even have to move to take the position.

Katie Robinson, Northwestern Associate head coach – One great way to keep the momentum going in Evanston would be to promote Katie Robinson from associate head coach to head coach. She’s got head coaching experience, running the women’s team at Tulane from 2012-2017. That might be interesting to Northwestern, given that Kipp’s prior head coaching experience was running a mid-major women’s-only program at Boise State. Robinson also spent 3 years at Virginia from 2008-2011 when they were a top 10 program, and Rutgers from 2011-2013 before they were in the Big Ten.

Alexis Keto, Head Coach, New Trier Aquatics – Coaches making the jump from club to college is becoming less-and-less common, but Keto certainly impresses and instills confidence in her leadership abilities when you talk to her. She’s the head coach of the nearby New Trier Aquatics, and has been a head club coach since 2005. Her last college coaching experience was as an assistant at NC State from 2000 through 2004, and she is a Northwestern alum – where she was also previously an assistant coach.

Dave Rollins, Head Coach, Florida Gulf Coast – Rollins has head coaching experience via 4 seasons at Florida Gulf Coast, and has plenty of Big Ten experience via his time as an associate head coach at Ohio State. Rollins coached the 10th-best 200 breaststroker in the NCAA last season, so he’s proven the ability to get swimmers to the NCAA Championships. There’s a hook here too: his mom is a former Northwestern swimmer in the pre-NCAA era, finishing as high as 13th in the country in the 50 back.

Robinson seems like the best choice at this point – she checks all the boxes, and the athletics director should feel comfortable with her already.

Steve Brown from NCAC? Experience at Arizona and Sarasota Y. He grew up in Chicago and still has ties to the area. You have to think he’s looking to get back to the NCAA level at some point.

If Northwestern is looking for a mid-major Division 1 head coach to take over, they should definitely consider Hollie Bonewit-Cron from Miami University. She has years of power five experience as an assistant coach at both the University of Florida and the University of Miami. She was also the first head coach in the history of Nova Southeastern’s program, building the program from scratch and coaching them to a fourth place finish at division II NCAA’s during her final year there. At Miami University (of Ohio), she became the first female head coach to win a men’s MAC championship, and Miami was just mentioned by swimswam in the honorable mention recruiting class on the men’s side for 2020. As far… Read more »

She’s not a people person. Look at her track record with assistants.

Have you ever been to the town of Oxford? There are more pastures in the surrounding area than there are campus buildings. I’d have to imagine the assistants are leaving to live in larger cities and or moving on to P5 programs.

Nope, we just wanted to get as far away from HBC as possible.

You realize what you just said? Check this out

So she only won cause teams got cut and the next best team didn’t rest their studs in 2018 because they already made the meet. HBC is all smoke and mirrors when it comes to coaching.

This article belongs in coachcoached.com

I mean if it’s Wild. I’ll take the job

I would agree with some of the names out there: Peresie (Akron), Kreitler (Cal), Slusser (Stanford)…all would be great additions. I would also look internally within the Big Ten at some of the elite associate/assistant coaches: White (Michigan), Bowe or Tierney-Walker (Ohio State), Chitwood (Indiana).

Matt Barany from Richmond could be a mid-major choice

UR has slipped a bit in the past few years. They had their peak in the early 2010s. This may not be Matt’s fault–their pool is pitiful and it’s an expensive school, but I’m not sure he is “hot” right now.