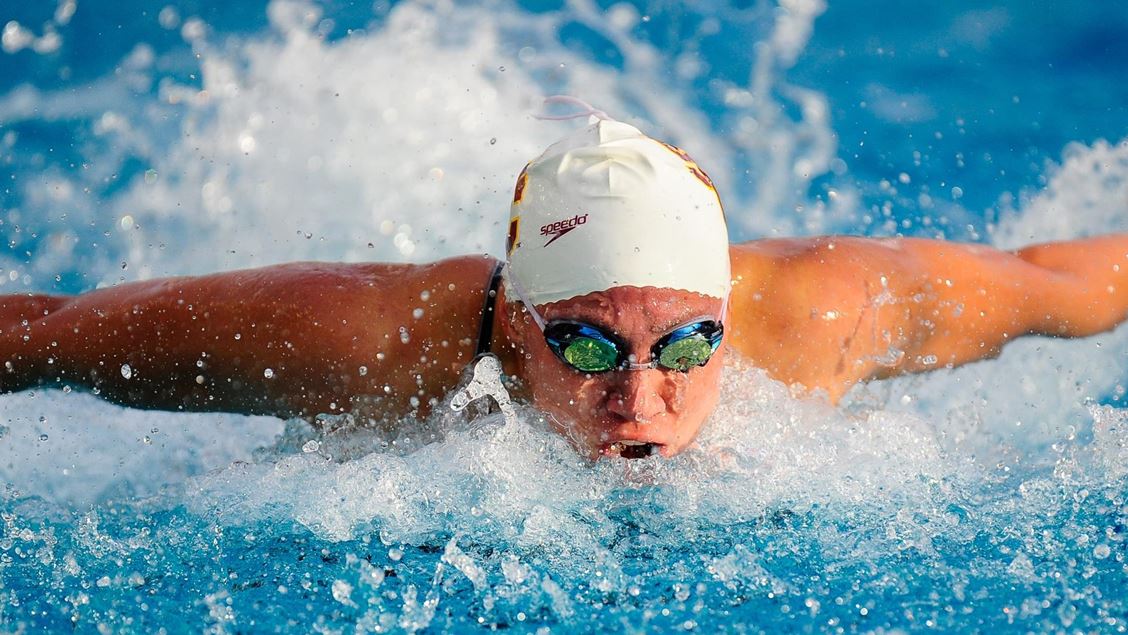 Hawthorne has been an assistant to Jeremy Kipp in all 5 of his seasons as an NCAA head coach, and that trend will continue back at USC where they first worked together. Archive photo via USC Athletics

The Meghan Hawthorne–Jeremy Kipp connection is now headed back to where it all began, Southern California, after USC announced on Friday that Hawthorne is the first new addition to Kipp’s staff after he was named the program’s new head coach 2 weeks ago.

As a swimmer, Hawthorne was a USC co-captain and a two-time First Team All-American for the Trojans in the 200 yard IM in 2012 and 2013, scoring a total of 6 CSCAA All-America honors in her career. It was during her swimming career at USC, from 2011 through 2014, where she and Kipp first worked together when Kipp was a USC assistant for 8 seasons from 2008 through 2015.

When Kipp took his first head coach job, at Boise State, he hired Hawthorne as an assistant, where the two worked together from 2015 through 2018. Then, in 2018, the pair moved together to Northwestern, where they spent 2 seasons with the Wildcats.

Now they’ll continue their partnership, which has reached almost a decade, back at USC.

She got her start coaching the Rattler Swim Club in San Fernando, California, the club she grew up training with, from 2009 through 2015, and also served as an assistant coach for the Viewpoint School in Calabasas, California.

She graduated from USC in 2014 with a Bachelor of Arts degree in human biology and a minor in occupational science and earned her Masters in educational leadership from Boise State in 2018. Hawthorne’s high school honored her in February of 2017 by inducting her into the Chaminade College Preparatory (West Hills, Calif.) Hall of Fame.

The school says that they don’t yet have any updates on the future of 2019-2020 assistants Chase Bloch or Jordan Schrotenboer, though former associate head coach Catherine Kase has said she’s not returning to the program this season.

Any idea who else he may be taking with him? Hodgson seems like he would be a great addition based off of his results at northwestern

My suspicion is that he’ll keep Chase Bloch on staff at USC, and then see what he wants to do with the last spot. I think both Chase and Andrew are beyond “last coach on the totem pole” status in their careers, so I’m not sure you can afford both of those guys (maybe the AD will make it work, with no associate head coach?). I’m still convinced that Katie Robinson is the best choice for Northwestern, and at any rate, if she were going to USC, I don’t think they would have announced Meghan first – unless they’re ‘holding a seat’ for Katie pending outcome of the Northwestern job. I’d love to see Katie as head coach at Northwestern… Read more »

Chase for sure is staying on the coaching staff…

Chase is staying. Andrew is joining him.

Hope andrew realizes how expensive it is to live in Southern California with a family. Chicago isn’t cheap but LA is crazy

That may be the case, but if his job status is unknown at Northwestern (sometimes new coaches don’t keep current assistants), it may be better for his family if goes with the option that guarantees a paycheck.

Agree. Chase is tweeting as if he has the job!

Hodgson would make sense to stay with Kipp. They had taken NW to recruiting heights they hadn’t seen in over a decade. Would like to see what he can do at USC!

Vote Up4-6Vote Down Reply
No