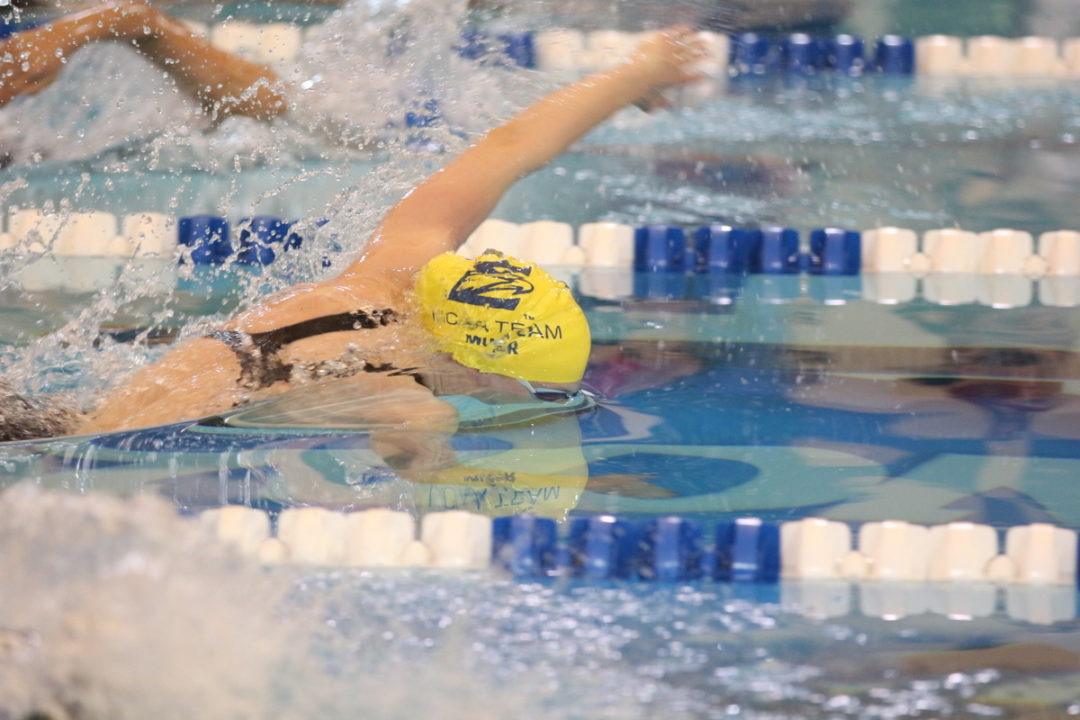 With the end of the major mid season invites, pretty much every team in the country has had a meet... Current photo via Emory Athletics

The Kean women made history on Saturday, capturing the program’s first-ever NJAC title with a convincing 150-112 win over 17-time conference champion TCNJ.

For the first time in the 48-year history of the JCU men’s swimming & diving program, the Blue Streaks defeated an NCAA Division I school.

The Cincinnati men’s team won 193-106 and the women’s team outscored the Owls 170-130, handing both Kenyon teams their first loss of the season.

With the end of the major mid season invites, pretty much every team in the country has had a meet that they’ve taken seriously. This means that we can finally start to get some useful information by comparing team’s times so far. The easiest way to do this is with our Swimulator. The Swimulator takes everyone’s top times so far this season and scores out a national meet respecting individual event limits and reasonable event choices (swimmers can’t do two events in a row). No diving is included.

9 Time defending champions Emory appear poised to stretch their winning streak to 10. They hold a 556 to 494 advantage over last year’s runner up, Kenyon. At this point last year Kenyon held a 634.5-519 advantage in the Swimulator scores and Emory ended up winning nationals by 103 points.

As always this time of the year, Williams is extremely low ranked. This is because NESCAC teams start their season much later than the rest of D3, so they haven’t had many opportunities to put up fast times yet. Williams are currently ranked with only 1 point. Last year they had 13 at this point in the season and they ended up 3rd at nationals with just over 400 points.

One new arrival in the rankings is St Kate’s. Their only scorer at nationals since 1992 was a diver in 2017 who has since graduated. Now they are ranked 7th with 144 projected points. St Kate’s brought in an incredibly strong recruiting class this year. Their freshmen carried them to 6th place rankings in the 400 and 800 free relays and 88 individual points, all from freshmen. It will be interesting to see if they can maintain their placing at the end of the year.

Defending champions Denison trail conference rivals Kenyon 538.5-518 in the current Swimulator ranking. Kenyon should be happy with their top ranking, but temper that enthusiasm because of how things shook out last year. At this point last season Kenyon had 509.5 points in the Swimulator rankings and ultimately only scored 322 points at nationals (3rd place). They were passed by Emory who also look very similar to their totals from last year. At this point last season Emory had 381 points. This year they have 384. They scored 369.5 at nationals. If Emory repeat that and Kenyon fall off again, their main challenger for 2nd looks like Johns Hopkins.

Hopkins are well ahead of their pace from last season with 429.5 points, last year they had 362.5 at this point. They also fell off a bit at the end of the year with 287 points at nationals.

Similarly to the women’s rankings, late starting Williams, 10th at nationals last year, don’t appear in the current rankings. They will likely move up once they start doing more meets.

One team to keep an eye on the rest of the way is Carnegie Mellon. They have 149 points in the current projections good for 9th. Last year at this time they were projected to score 59 points. They ended up scoring 0 at nationals. So while they’re ahead of last year’s pace, history says they’re likely to drop off. With all of their projected points from freshmen and sophomores, perhaps this year will be different.

The Emory women and Denison men look on pace to defend their titles. The Emory women have 6 swimmers ranked to score 30 or more points and are top 3 on every relay. The Denison men are incredibly deep as they currently have 17 men ranked in scoring range. However, if Kenyon can avoid the drop off they saw last year, they are possibly in a position to challenge for either title.

I’ll be doing write ups on division 2 and some conference rankings in the coming days, but if you want to see those rankings before those articles are written, feel free to run the simulation you are interested in yourself.

Kenyon men about to be choke artists again!!!

Williams women came second at NCAAs last year.. and yet they’re last on your list?!

Hi Ephfan, this is not a subjective list. It’s based on how the NCAA Championship meet would turn out if it were based on season-best times this year. It’s effectively “psych sheet scoring” if the psych sheet (sans diving) were put out today.

That being said, Williams graduated a lot from last season, including Emma Waddell. I don’t think they’re going to place 2nd again, but they will definitely be top 10, probably top 5 if Molly Craig can slide in and fill Waddell’s spot on the 400 medley (or anywhere else). They just haven’t swum times yet this season to back that up… Read more »

If you look at the event by event rankings, almost every time by Emory and Denison is from the Denison Invite, but Emory scores more points. So why is that? At an invite style meet with fewer teams than nationals, the swimmers at the back half of Denison’s roster who score decent points can neutralize much of Emory’s top end advantage. At nationals this is much harder to to. Elite top end rules. Swimmers at the bottom half of B finals only make a marginal difference in the score.