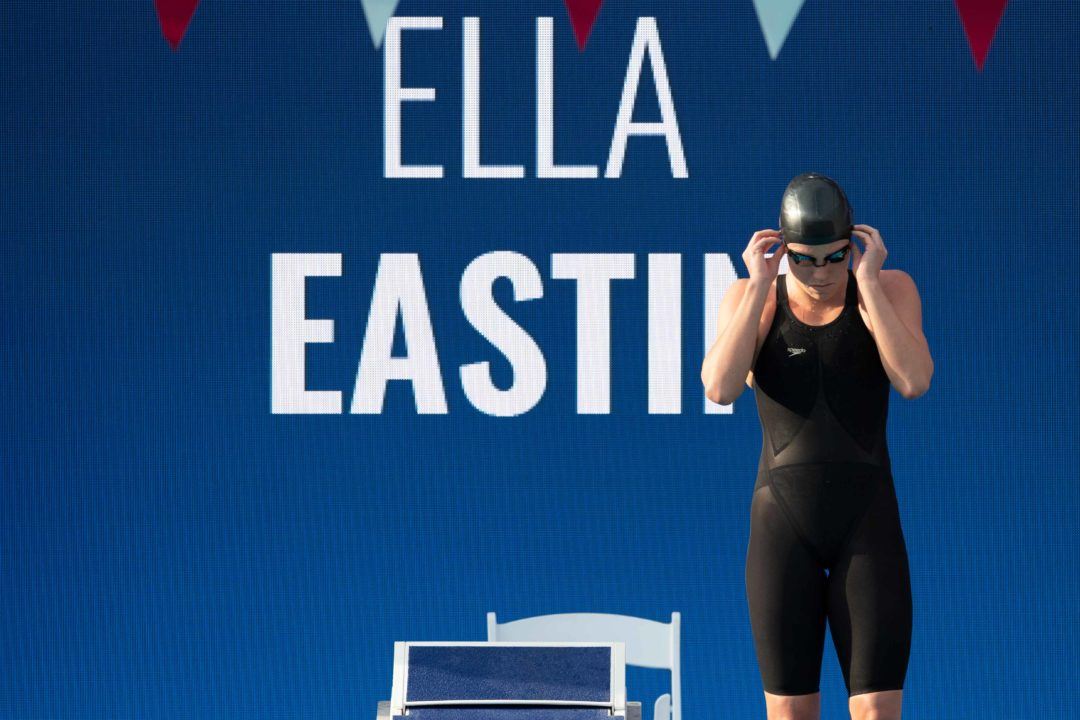 Ella Eastin swam a pair of lifetime bests in the 200 IM at the Pan Pacific Championships after being diagnosed with mono at the beginning of July. Archive photo via Mike Lewis/Ola Vista Photography

American Ella Eastin recorded a pair of lifetime bests in both the prelims and the final of the women’s 200 IM at the Pan Pacific Championships in Tokyo just over a month after being diagnosed with Mononucleosis.

It was unclear whether or not Eastin would swim at U.S. Nationals at the end of July after finding out she had mono at the beginning of month, but she ended up competing and qualified for the Pan Pacs by way of placing 3rd in the 200 IM with her 2nd-fastest performance ever (2:10.84). Other than that event, she only swam the prelims of the 200 fly and completely scratched the 400 IM and 200 free.

Here in Tokyo, Eastin was entered in the 400 IM and 200 fly on days 1 and 2 but scratched out of both. Without seeing her in action, what type of form she was in was up in the air, but she impressed in the prelims of the 200 IM on Friday with a new personal best of 2:10.25. That got under her previous best of 2:10.54 from the 2016 Atlanta Classic and put her through to the A-final in 4th (as the top American).

Comparing the splits of Eastin’s three-fastest swims ever, her backstroke splits of 32.6 and 32.7 in Tokyo are a full second better than she was in 2016. The butterfly was the only stroke in her finals swim that was the fastest split out of the three, but she was just off her prelim backstroke split and her breast split from the Atlanta Classic to combine for her fastest swim ever.

Ultimately this swim wasn’t quite enough to get Eastin on the 2019 World Championship team, as both Kathleen Baker (2:08.32) and Melanie Margalis (2:09.43) were faster than her at Nationals despite Eastin being quicker here at Pan Pacs. However, she is slated to qualify for the World University Games team next year with her performances in the 200 IM, which is no small feat considering the news she received less than six weeks ago. She currently ranks 8th in the world for the event in 2018.

CORRECTION: she was not diagnosed with mono as many believe, but actually had a very serious case of ligma.

Seriously amazing…mono is no joke. It’s not just a flu-like thing that subsides once the apparent symptoms are gone…it’s deeply affecting and lasts well beyond when it seems to last. Good for her

Yep, I’ve known people who didn’t truly feel back to normal for 6 months after contracting it.

Is the photo from today at Pan Pacs? Just curious as to if she’s wearing a closed back suit?

Ella Eastin is a consumate team player. We can’t see it now, but in 3 weeks, up to half the Australian team will contract mono. #secretplan

That’s why you never drink the Austin tap water…

Swimmers who put up top 10 times in the world should be able to swim at worlds, no matter which country they represent

I wouldn’t be surprised if Ella gets to go to worlds! Kathleen will have a big double on the second day of Worlds with 00 back semis coming before the finals of the 200 IM with only the men’s 200 free in between……just something for her and Coach Marsh to think about.

I hope for team usa’s sake this happens!

There’s no reason why she needs to swim both races, especially being the WR holder in the backstroke, she should focus on that with a Masse/Seebohm battle in tow

Ella Eastin is the alternative. K Baker is still better at backstroke than IM.

The whole saga with the US women’s IMs this summer was overall a bit weird. There was the whole Cox story that broke just days before Nationals. Then with Eastin scaling back her schedule, Smith-Margalis 400 IM seems all but certain. But that doesn’t happen. McHugh-Forde deliver in the A Final in what is probably one of the finest races of the summer. Baker’s explosion at Nationals also throws the 200 IM expectations off and sets the bar extremely high for that for Pan Pacs. I remember seeing Margalis’s face after her 400 IM silver the other day, where she probably realized the time still didn’t unseat McHugh-Forde and she’d still have to sweat out the 200 IM.

Heroic effort to make the Worlds team. The good news is, she’ll get a chance to strut her stuff at the WUG next summer when she’s healthy, and hopefully show up a lot — if not all — of the swimmers at Worlds.