Americans DQed For Swimming Out Of Order, Brazil Bumped To Relay Gold 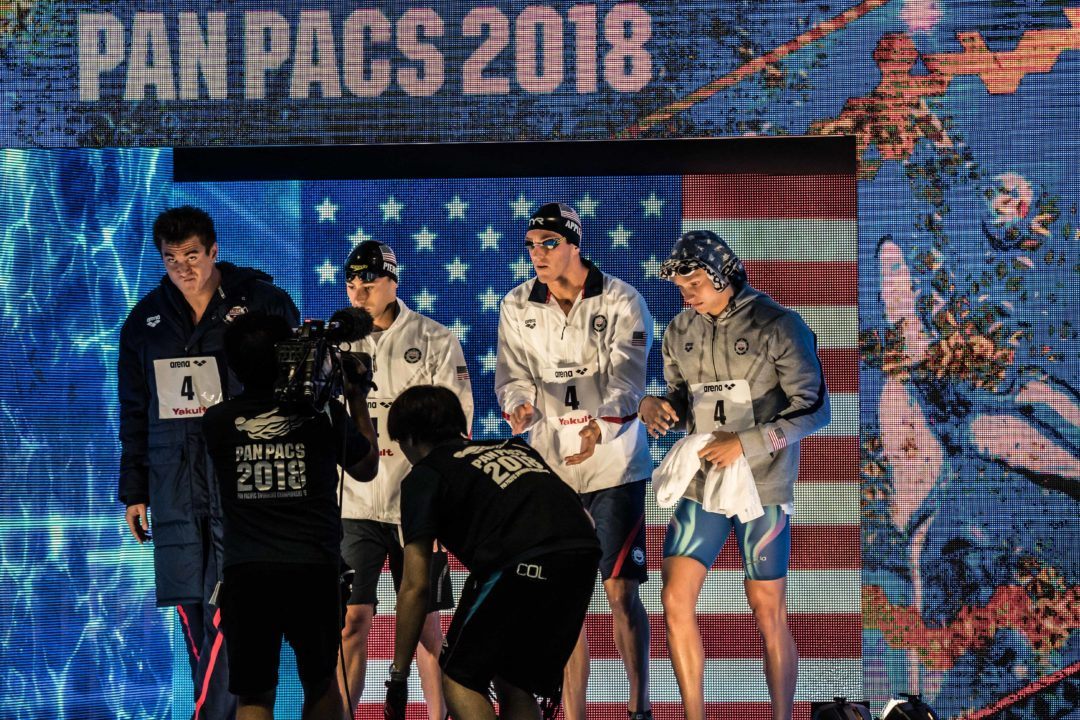 The American men have been disqualified and stripped of their gold medals after swimming the wrong order in the 400 free relay. Current photo via Mike Lewis/Ola Vista Photography

The American quartet of Caeleb Dressel, Blake Pieroni, Zach Apple and Nathan Adrian had combined to win gold in the men’s 400 free relay in a new meet record of 3:11.67 at the Pan Pacific Championships in Tokyo, but shortly after the relay they were disqualified for swimming out of order.

Sources tell SwimSwam that the swimmers were told the wrong order by the coaches.

The CBDA account on Twitter also announced the news of the Brazilians being bumped up to gold, and the results are now official. It looks as though Apple swam second and Pieroni third when they were supposed to go the other way around. Prior to the DQ, they had broken the 2010 meet record held by the U.S. at 3:11.74.

Brazil gets bumped up to gold with their swim of 3:12.02, led by a scintillating anchor leg from Pedro Spajari (46.94) that was the fastest in the final (even including the American splits). Adrian had narrowly held off the Brazilian with a 47.27 anchor leg of his own.

Prior to being disqualified, the American splits were:

The Australians move up from bronze to silver in 3:12.53, and thought to be .01 off of a medal, the Japanese men get bumped to bronze after setting a new Asian Record in 3:12.54.

This same situation happened fairly recently at the 2016 Short Course World Championships in Windsor, where the Canadian women swam the wrong order in the 400 free relay final and were disqualified after initially winning the silver medal.

Bone headed mistake, but rules are rules. Rather it happen here than at Worlds or the Olympics. It is pretty dumb though. It reminds me of the Aussie women in 2001 that were DQ’d for jumping in the pool to celebrate while another team was still finishing the race.

The coaches have totally screwed up these relays at this meet! How can they tell the swimmers the wrong order ? If that is indeed the case it is so amateur and the responsible need to be fired!

yea, its just the PanPacs… relax

Whatever meet it is the swimmers trained and worked hard and had sacfrices to get there and they shouldn’t have those things go to waste because of stupid mistakes.

Unless they, themselves, made the mistake. But let’s just jump on the assumption it was the coaches’ fault.

They can’t make the mistake, orders are entered and communicated by the head coach.

The coaches are professionals. It doesn’t matter where it happens.

this was the best swim swam comment I have ever read

Thanks ONE MILLILITER MORE. That was the funniest comment I’ve read on SwimSwam.

it’s the premier international meet of the year for the US, it’s a big deal

Chill, things happen. Have you never made a mistake and never will in the future? And if you say you would never make a mistake so big then you have some serious soul searching to do. EVERYONE makes mistakes

Sorry but mistake like this could happen at age group meet when young kids mix the order, not at major international meet with all adult crew. Coached MUST let the swimmers know the right order, you hold the relay card in your hand and communicate relay order to swimmers while looking at the relay card. it is just that simple….Someone who is not taking his/her responsibilities seriously should not he there

Give me a break. Not this stupid at this level. If you are so blasé about this type of mistake at this level that affects other people perhaps you need to do some soul searching yourself. These are elite professional coaches handling elite athletes. It’s going to be a long flight home.

This is not a mistake in the sense..I’m sorry I missed that. The job of the head coach is to ensure that everything is in order, that relay cards are filed and communicated. This is a gross negligent error.

It is because they were too busy watching the Safe Sport videos!

It is highly likely the coaching staff noticed their mistake from the moment Caeleb was approaching the 75 meter mark and Zach was on the blocks readying for the exchange – the coaching staff stopped cheering at that moment… It all makes sense now as to why the coaching staff were not cheering them on: https://www.youtube.com/watch?v=JUa1gSqb5p0 Notice the sudden change of the cheering area of the USA Team at approximately the 4:43 mark of the video. it is an apparent unfortunate mistake. Most mistakes in coaching are made when exhausted – they all need a power nap!

Good observation. Their reaction is not indicative of what was happening in the race. They must have realized their mistake.

You’re right now that I looked at your link. I didn’t see it at Dressel’s 75 meter mark, but saw it when Zach was in the water. They were just standing there.

Yes, but the character flaw of the head coach is inexcusable. To let the relay team take the metals hoping nobody noticed is a serious issue. I’d they knew and stopped cheering, but still allowed the athletes to take the podium…is a violation of USA swim standards.

My first thought was how they were awarded the medals without this being noticed. Not a good look for the coaching staff.

I am not sure that I agree. Certainly the coaches were at fault for the incorrect order. But, as coaches we see kids DQ frequently for various offenses and the officials don’t catch it. Are we required to notify them? I always tell my swimmers when they make an error, of course, and tell them they got lucky that the official didn’t’ see it. I am not sure there is a violation of swim standards here, unless the coaches are required to tell the officials about the mistake. The FINA officials are at some fault for not making the DQ official before the medals are awarded.

I think firing may be a little extreme. But it’s definitely something to learn from.

Firing is not the right word, just shouldn’t be chosen to be on a staff again. This is inexcusable at the International level. NCAA assistants would lose their jobs if this were to happen at NCAAs and cost a team a championship. People need to stop saying this is not a big deal, it’s a huge deal and a total embarssment.

This is not as bad as the DQ that cost the Stanford women an NCAA Championship in 2016. Things happen. Should Stanford have fired their coach?

The dishonesty of allowing the kids to take the medals is worse than the actual mistake.