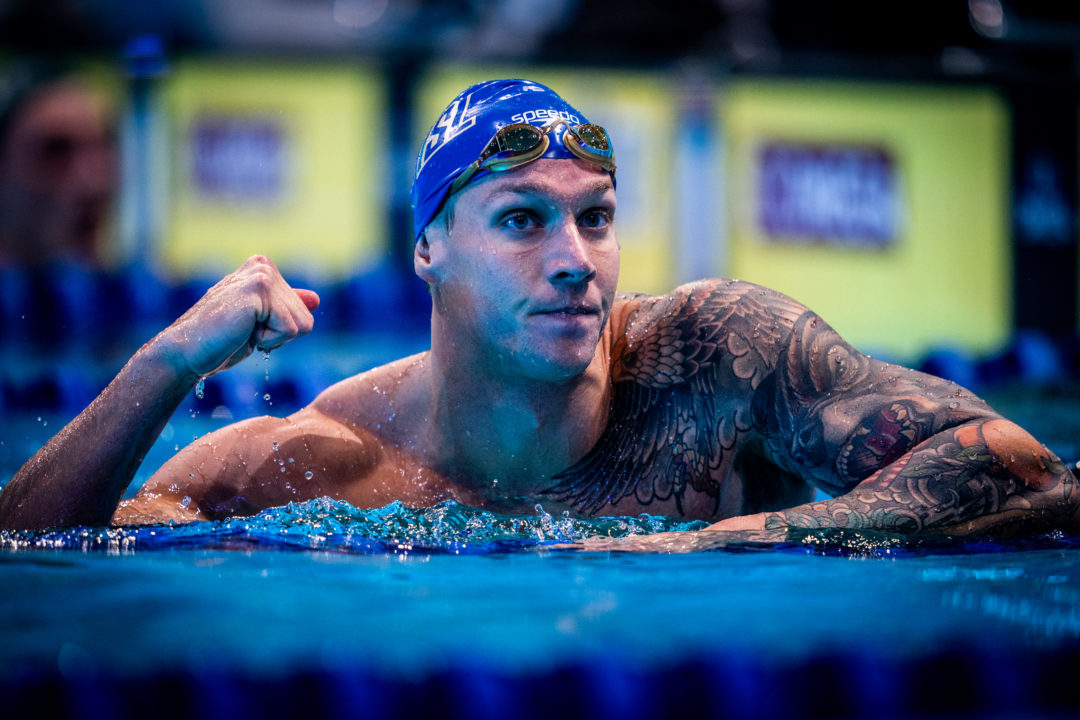 From 2004 to 2007, Ian Crocker simultaneously owned the fastest 100 fly times in history in yards, SCM, and LCM. Now, Caeleb Dressel holds all the records. Current photo via Mine Kasapoglu

Not since 2007 has one man simultaneously owned the fastest times in history in all three variations of the 100 butterfly: short course yards, short course meters, and long course meters. That man was Ian Crocker.

Le Clos set the previous World Record in December 2016 in 48.08, though Dressel blew it away with a stunning 47.78. Le Clos and Shields also put up some of the fastest times in history, clocking in at 48.45 and 48.47, respectively. Le Clos is now the second-fastest man in history while Shields remains the third-fastest, passing Russian Evgeny Korotyshkin but being passed himself by Dressel, but enough with today’s events, let’s look at the historical significance of Dressel’s performance.

In 2002, Ian Crocker broke the NCAA, U.S. Open, and American Record in the 100 fly for the first time, clocking a 45.44. In 2004 Crocker would lower this mark to a 44.72 at the Big 12 Championships. In the year between, Crocker became the World Record holder in the 100 LCM butterfly at the 2003 World Championships in Barcelona, also earning the title of first man under 51 in the race.

The 2004 NCAA Championships were held in a short course meters pool, making it impossible for Crocker to lower his yards record any further that season, though it gave him the opportunity to go after something greater, the World Record.

At the 2004 NCAA Championships, Crocker squared-off with then-World Record holder in the 100 SCM butterfly, Serbian Milorad Cavic who swam for Cal-Berkeley. Crocker broke Cavic’s record in both prelims and finals, first registering a 49.77 to become the first man under 50, and then taking it down again to 49.07 in finals, beating Cavic by almost 2 seconds.

With this, Crocker had completed the trifecta and now owned the 100 butterfly records in all three pools. Crocker would hold this esteemed position until March 2007 and the NCAA Championships when his yards time was bested by Venezuelan and Arizona Wildcat Albert Subirats with a 44.57. Just a couple of weeks later, Subirats would win the bronze medal at the 2007 World Championships behind Crocker, who took silver, and Michael Phelps, who won gold.

As the table shows, Crocker was the fastest 100 butterflyer in history in all three pools simultaneously from March 2004 to March 2007.

This table shows the duration of time for which Crocker was the fastest in history in each venue of the 100 fly and for simplicity has omitted each time he broke his own records. The table below tracks Crocker’s record progressions over the years.

Crocker truly assaulted the record books in 2004, first lowering his own yards record, then breaking the World Record in SCM twice in one day, and then again at the 2004 U.S. Olympic Trials in Long Beach where he demolished his year-old LCM record.

As of this writing, November 21, 2020, Dressel is simultaneously the fastest 100 butterflyer of all time in all three pools. He will have to keep these titles for 2 years, 11 months, and 18 days in order to match Crocker’s reign as the ultimate king of the 100 butterfly.

Like Crocker, Dressel’s first record to fall to another swimmer is most likely to be his SCY mark at 42.80 since the NCAA is a pressure cooker of insanely fast swimming. Dressel’s LCM record is probably safest, and he stands the best chance of lowering it between now and the next ISL season. He is unlikely to ever swim a 100 SCY butterfly fully tapered again, so it’s difficult to see him lowering his best time of 42.80 in yards, though pros do occasionally surprise us with spectacular yards swims. As for his brand new SCM record, it’s probably safe until at least the next ISL Final or FINA World Championship (SCM edition). World Records are sometimes beaten in FINA World Cup competition, but the time he put up today is so far ahead of everyone else who has ever swam the race, it’s safe to wager it’ll probably stand for a while.

Watch a video of Dressel’s race in the tweet below.

A WORLD RECORD in the 100 Fly to start the @Iswimleague Finals!

You DON’T want to miss the FINALS tomorrow at Noon on @CBSSportsNet! pic.twitter.com/zs0K7qm4yJ

I don’t get why this is such a big deal… With only the US swimming yards, it greatly impacts many swimmers ability to even possibly achieve this

Except many swimmers come to the USA & CAN swim yards as well. Goes back decades.

Ian actually held 4 world records in the fly at once. Held the 50 LCM having set it right before 2004 NCAAs at a time trial.

Crocker was a beast, I will always remember that 50.40.

Ok, this just made me curious to see him swimming a 200 fly… As a matter of fact, I’d love to see Caeleb swimming all the events, let’s find this man’s limit!! (If there’s even one)

I’d love to see this!

Am I wrong in thinking that time trials after a taper meet is a very American thing, because to my knowledge it doesnt happen in Europe, only in the US.

I’m Canadian and swam in the US for college and it was an only US thing for me too, I never heard of any meets having a time trial after the actual meet at home

I think it’s mostly a ‘yards’ thing. Since both yards and long course meters carry such importance here (as compared to most countries where it’s long course and then everything else in a clear heirarchy), people try to capture that performance taper when they can.

If the ISL makes the world care more about SCM than it has historically, maybe we’ll see more of a rise in that around the world.

Didn’t notice this before, but at the 1:10 mark on the video of Dressel’s 47, when Chad Le Clos looks up at the board and sees the result, he rips off his cap and smashes the time pad in rage. Only later does he come over for the handshake.

And man, Crocker’s 50.40 doesn’t get any less amazing every time I read about it.

I think that’s probably for losing the race even though he went a crazy fast time too. He probably didn’t expect Dressel to drop that much time

Yeah for sure. Imagine going 48.4, half a second quicker than anyone has ever been in the history of the ISL, only for some chump 2 lanes over to not only smoke you, but also break your only WR on the books.

I’d be pissed. It’s like in a video game where you’re doing everything so well, only to get screwed over by some scripting/overpowered AI.

Yeah honestly, I’m a huge Caeleb Dressel fan but you made me realize it must hurt to be Chad le Clos or Florent Manaudou right now. At the level they already were at, Dressel dropping that much time sounds like badly written plot armor.

I’ve said it before half jokingly but Dressel has somewhat ruined the excitement of a race for me. Not only has he set ridiculous expectations for sprinters, but it’s now impossible to cheer for anyone else because we all know Dressel’s just going to steamroll them. He just absolutely trivializes every other sprinter’s efforts.

Dominant athletes pop up in any individual sport. To me, it is just as exciting seeing athletes making historical statements as watching close competitions. It is the reason for records to be faster and faster. I do not think “Dressel trivializes every other sprinter’s effort”. It is not like he is not facing any sort of competitions whatsoever, and I do not think 2nd, 3rd places finishes mean absolutely nothing. Just think about British breaststrokers in the 100/50. Athletes themselves have their own expectations and embrace the pressure. Otherwise, no one would be striving for records, or national teams.

Yea you gotta feel for Flo. He’s made a successful comeback and he’s murking everyone in the 50s…outside of the one guy thats murking him

Flo still got tight competition with Ben Proud and Morozov in the 50 free. Look at 2018 Hangzhou SCM worlds. Proud is injured this season, while Vlad is out of shape. The tall Greek guy who won bronze medal last year in the 50, swims for LA Current is not that far behind, and has been steadily improving.

the tall greek guy has a name: Gkolomeev

He was also the first person to come over and shake Dressel’s hand, it must be hard to have a great swim like that and still be destroyed by the better part of a second, lose your record and then put yourself together in about 3 seconds to congratulate someone

I also respect that as soon as Dressel saw Le Clos coming over to congratulate him, he got off the lane line. He realized that what Chad was doing wasn’t the easiest thing and respected it. Dressel’s just such a good guy and good ambassador for the sport. It’s hard to make someone so humble a villain

All true. Does Dressel ever say the wrong thing? Dude is humble. Smart. Very intelligent. He’s gonna be a massive star in Tokyo next summer. Fans of USA swimming are very spoiled to go from 5 straight Olympics of MP to Dressel moving up to top dog.

Yes, that was class on Caeleb’s part.

didnt know cavic was cucked by crocker as well before phelps came along. tough luck for that guy

Are there any other events are the fastest scy/scm/lcm swims all held by the same person? I can’t think of any, king might do it tomorrow in the 100 breast. Ledecky and Regan smith could probably do it if they fully tapered scm.

that is horrible grammar and I see that now hahaha

Lochte had all the 200 IM records for a couple years until Nolan broke 1:40

neither is still current but recently I think Hosszu held the 4IM for about a year until Belmonte broke the scm wr in 2017; Rebecca Soni also held the 200 brst for a few months following London until her yards record was broken