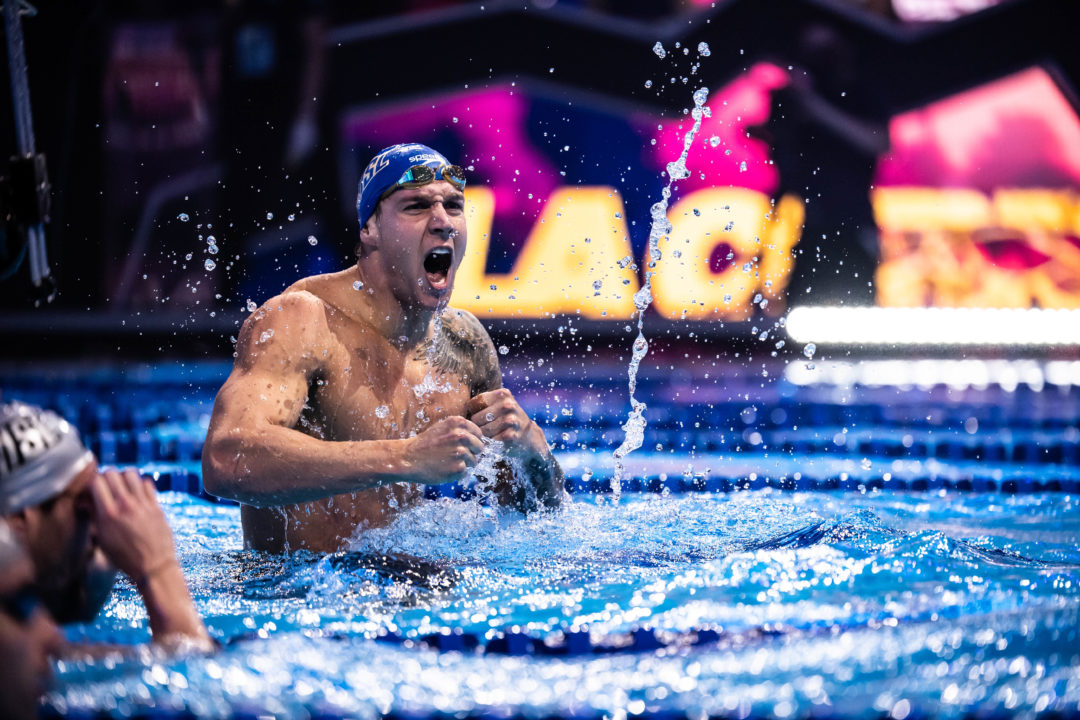 Caeleb Dressel finished off the ISL semi-finals last week with a record-setting day, and he picked up right where he left off to begin the final.

Dressel smashed the world record in the men’s 100 butterfly in his first event of the match, clocking 47.78 to become the first man under 48 seconds. The previous fastest-ever swim belonged to Chad Le Clos, who went 48.08 at the 2016 Short Course World Championships.

In addition to the world record, Dressel also annihilated the American Record of 48.63 by almost a full second. That previously belonged to Tom Shields, done at the 2015 Duel in the Pool.

Dressel, who swims for the Cali Condors, held a previous best time of 48.71, set at the 2018 SC Worlds, which only ranked him fourth all-time and was the 11th-fastest swim prior to the race.

Both Le Clos and Shields were in the race, taking second and third in times of 48.45 and 48.47, respectively. The time for Shields is his fastest ever, well under his old AR, while Le Clos’ swim is his third-fastest ever and his best in four years.

All in all, the race elicited three of the five-fastest swims ever.

In fourth, Dressel’s Cali teammate Marcin Cieslak put up a time of 49.18 to smash his Polish Record of 49.54 set earlier in the season.

This is the third world record for Dressel in short course meters, all done in the ISL, having broken the 50 free mark during last season’s final and taking out the 100 IM record in the semi-finals. He also now owns five SCM American Records after coming into the match with four.

Holy cow. Just an absurd swim. Was only a matter of time. I think this record can approach 46.

“I think this record can approach 46″… who do you think you are?

I’m nobody, I just think Dressel can take this to 47 low.