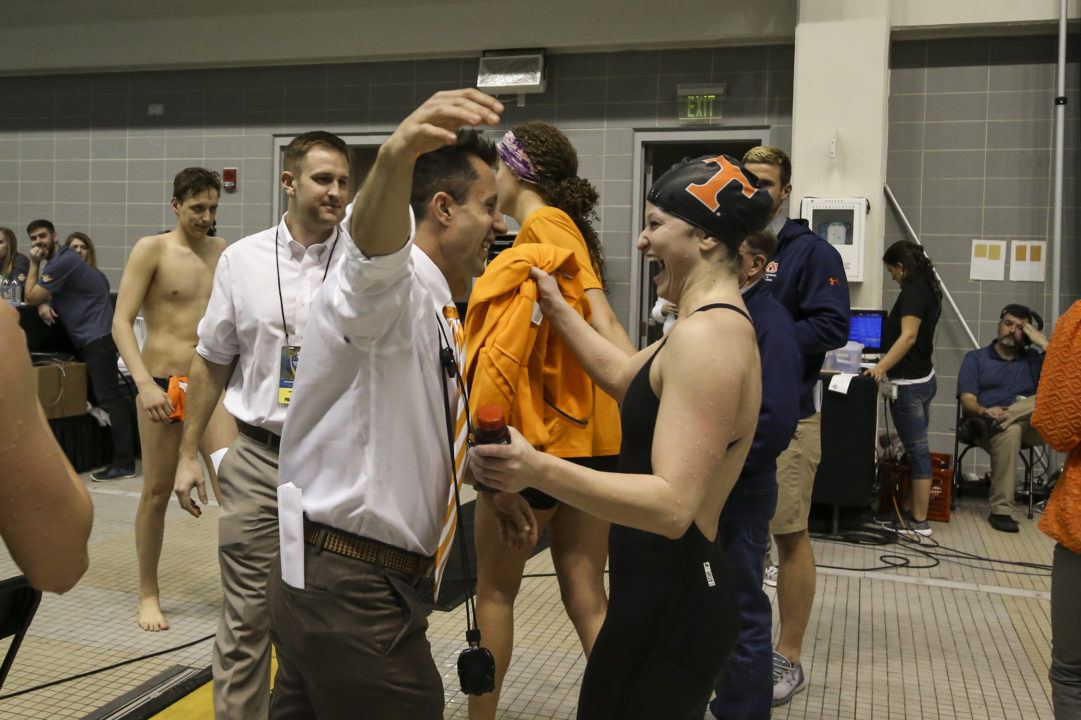 Virginia announced the hiring of Fenwick, along with Wes Foltz and Blaire Bachman to Desorbo’s new staff today.

Desorbo has traditionally been regarded as a sprint coach, so hiring on a top assistant known for coaching distance swimmers should help round out his staff in the early goings. Fenwick had been with the University of Tennessee since 2012, heading up a program that had a run of success with distance swimmers both in the pool and in open water events. Prior to that, he was a club coach with Mission Viejo, the California club known for its prominent distance program.

He swam at Germantown Academy (yet another distance hub) and coached there in the mid-2000s. Fenwick will join the University of Virginia’s staff this fall, likely continuing his work on a distance program that is fresh off of churning out national teamer Leah Smith under the previous staff.

In Fenwick’s time at Tennessee, the women’s swimmers broke 17 out of 19 school records, and the men’s team broke 12 out of 19 records. In his first year with the team, the women finished a program-best 3rd at NCAAs. That first year also marked when Tennessee head coach Matt Kredich took over the men’s program as well. The women’s team finished in the top 5 at SECs in each of Fenwick’s 5 seasons there, and had a pair of top 10 team finishes at NCAAs as well. The Tennessee men had a high water mark of 7th at NCAAs in 2016 – their best placing since the 2001 season.

Foltz follows Desorbo from NC State, where Desorbo was an associate head coach and Foltz Director of Operations for the Wolfpack aquatics staff. Bachman was part of the staff at Indiana University, serving as an assistant coach there since 2016. Prior to that, Bachman had assistant coached at Dartmouth and was for a time the youngest head coach in the nation at Brenau University of the NAIA.

The Virginia men will be the bigger rebuilding projects of the two in Charlottesville. They were 28th at NCAAs in 2016 with 15 points and didn’t score in 2017, though they were well-represented at the national meet, including with relays that in some cases were made up entirely of freshmen and sophomores. The women’s team placed 5th at NCAAs in 2016 and pulled off 12th last season, even after graduating 19-time All-American and former U.S. National Teamer Courtney Bartholomew.

Fenwick gave SwimSwam a statement on his new job:

“A decade ago, Matt Kredich gave me an opportunity and changed my life. My experience at Tennessee has molded me as a coach and helped shape my perspective as a human being. I’m forever indebted to Matt and the Tennessee family for an incredible 7 years in Knoxville.

“Today, I am excited to announce that I will be joining Todd DeSorbo and the Virginia Cavaliers in Charlottesville following the World University Games in Taipei.

“Todd DeSorbo‘s meteoric rise has not come by accident. His passion, energy and leadership are contagious. He helps to make everyone around him better. We are committed to creating a magnetic center of excellence to attract the best and brightest in swimming. Virginia has a rich and storied tradition founded on an uncompromising commitment to the pursuit of greatness. We intend to honor that tradition to produce student athletes ready compete at the highest levels in all aspects of life. Let the adventure begin! Go Hoos!”

You can see the full Virginia press release on the hires here.

who will be taking the place of Fenwick and also Brett who went to Princeton?

I believe Rich Murphy from Dynamo has taken the position vacated by Brett.

Congrats Tyler! Keep doing your magic with the distance swimmers!

Haters gotta hate, Patti. Always a troll in the mix.

not exactly been magic recently with Tennessee men’s distance

Maybe they don’t feel Tyler has done any magic at Tenn?!?