Which NCAA Team Fallen On Recent Hard Times Will Be First Back to Top Ten? 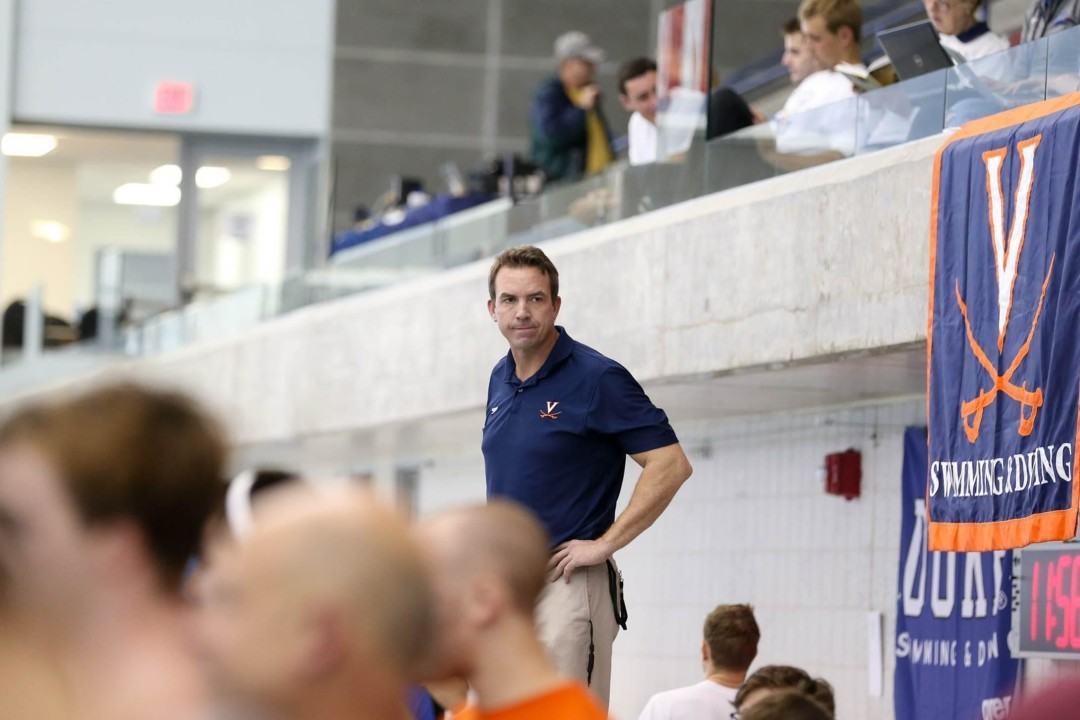 Given the two recent hires and the downward trajectories, which of three top programs – Arizona men, Arizona women, Virginia men – is most likely to make it back into the top ten at NCAAs first? Current photo via Tim Binning/TheSwimPictures.com

Both men inherit programs that have floundered in recent years.  In Arizona, Busch will have his work to cut out to reverse a three-year decline.  Both the men’s and women’s teams had finished in the top ten at NCAAs as recently as 2014, but the men placed 24th and the women placed 16th this past year.  Adding insult to injury, the Wildcats’ main rivals, Arizona State, has emerged as an up and coming program after hiring the famous Bob Bowman two years ago.

In Charlottesville, DeSorbo will be dealing with something more of a mixed bag.  The women’s team continued to thrive under Busch, recording top five finishes at NCAAs and ACC victories, as the now-graduated Leah Smith emerged as a world-class distance freestyler.  The men have not faired nearly as well, facing a host of transfers out of the program, well-publicized suspensions after a hazing incident, and an inability to draw top-ranked recruits, culminating in a rock-bottom finish at NCAAs this past March, as the Cavaliers failed to score a single point.

Given the two recent hires and the trajectories, which of the three programs – Arizona men, Arizona women, Virginia men – is most likely to make it back into the top ten at NCAAs first?

Of our the three teams we’re discussing, the Arizona men have fallen the furthest.  Frank Busch led stars like Darian Towsend, Albert Subirats, and Marcus Titus to a NCAA championship in 2008.  That squad also included Cory Chitwood, who the younger Busch is now bringing with him to Arizona an assistant.  The program continued to develop star power for a while, as Kevin Cordes crushed NCAA records under both Eric Hanson and DeMont, but hasn’t had the same level of swimmer the past few years.

The Wildcat men only return three individual point scorers this year: Chatham Dobbs, Chris Weiser, and Justin Wright.  Another who picked up individual points, Blair Bish, transferred to Missouri State in the wake of DeMont’s retirement.

Meanwhile, of the five men we have noted as committing to Arizona as incoming freshmen this year, only one of them is really a sprinter, so Busch is really going to have to dig deep to find the pieces to rebuild the sprint relays that are such a a big part of scoring at NCAAs.

The situation for the Arizona women is a little more complicated.  Their 16th place finish at NCAAs last year was the best of any of these three programs.  While their incoming class is relatively small, they do bring in several sprinters who are already close to the times needed to score points at NCAAs, and at the very least, should help out on the Wildcat relays.  On the hand, the spate of transfers that occurred this spring and summer will probably hurt the women more.  Those transfers include Kennedy Lohman, their best breastroker, and Annie Ochitwa, who swam on four point-scoring relays at 2017 NCAAs.

While Virginia men never had quite the same level of success as Arizona, they did peak with an 8th place finish in 2011 under longtime head coach Mark Bernardino.  After Bernardino’s controversial departure in 2013, the women largely continued to flourish under Busch, while the men’s team did not fair so well.  That’s not to necessarily say that the disparity in the men’s and women’s results were Busch’s fault – many of the swimmers he coached were not his own recruits and younger guys like Zach Fong and Ted Schubert have shown some promising improvement.  Still, the results were not there and Virginia struggled to attract top in-state swimmers.

DeSorbo has his work cut out for him if Virginia is to get back into the top ten at NCAAs.  He has a model for how to do that from his experience at NC State, where he was primarily responsible for sprinters.   The Wolfpack built their team around the sprint relays into one of the hottest programs in college swimming and ACC champions, and then expanded from there into one of the best all-around teams in the country.

Despite the summer’s uncertainty in the coaching situation, the Cavaliers were not hit with same wave of transfers as Arizona.  Additionally, while the Cavs’ relays may not have done great at NCAAs, they were largely manned by freshmen and sophomores, meaning that DeSorbo will not be starting from zero.  That, coupled with a diverse incoming freshman class of at least nine men, plus the buzz that DeSorbo has generated over the past few years with NC State, means that Virginia should be able to restock relatively quickly.

Obviously, there is no way of knowing for sure which of these three programs will be the first back into the top ten at NCAAs, but all appear to have the coaching staff, the history, the facilities, and the resources to be back among the elite programs in the country sooner rather than later.  It feels like DeSorbo’s success at NC State makes the Virginia men the “hot” pick, but given that the Arizona women had the best NCAA finish this past year, have a relatively strong group of freshmen coming in, and Busch’s proven track record of working with women, they’re the safer bet for ow.

Is this even a relevant question ? How do any of the schools mentioned in this article (or any D1 school for that matter) present themselves to potential recruits? For any recruit, for at least the next 3 years no coach can say ” If you come here we can have a chance at winning NCAA’s sometime during your career”. Stanford is going to win. What is the hook that a coach could use to persuade a top 10 talent to join their school (other than, its close to home). Especially PAC 12 schools, they don’t even have a chance to win a conference title. Does “Hey, we could move into the top 10 at NCAA’s” sound like a great… Read more »

Florida Women. Zero points last year but they will be back to the top 10 by 2019 NCAAs. Maybe even 2018 if the freshman continue to improve at the rate they did last year, but definitely by 2019.

Friendly reminder that while it wasn’t a dynasty, Arizona broke the unprecedented Auburn win streak. Not to mention pulled off the very rare mens AND women’s national championship sweep. Oh, and wasn’t Augie an assitant coach at the time? Probably a coincidence.

7
-11
Reply
Question
Reply to  Zona Men For The Win

Was the streak broken when David left or before?

Ok Arizona was definitely on auburn level at one point though not as good they where definitely dynasty material, uva not so much ever at least not to the scope of Arizona or auburn

Yes only one year, thats a lot more than you can say for the large majority of teams.

Why is everyone sleeping on Michigan men

Cause something is going on there