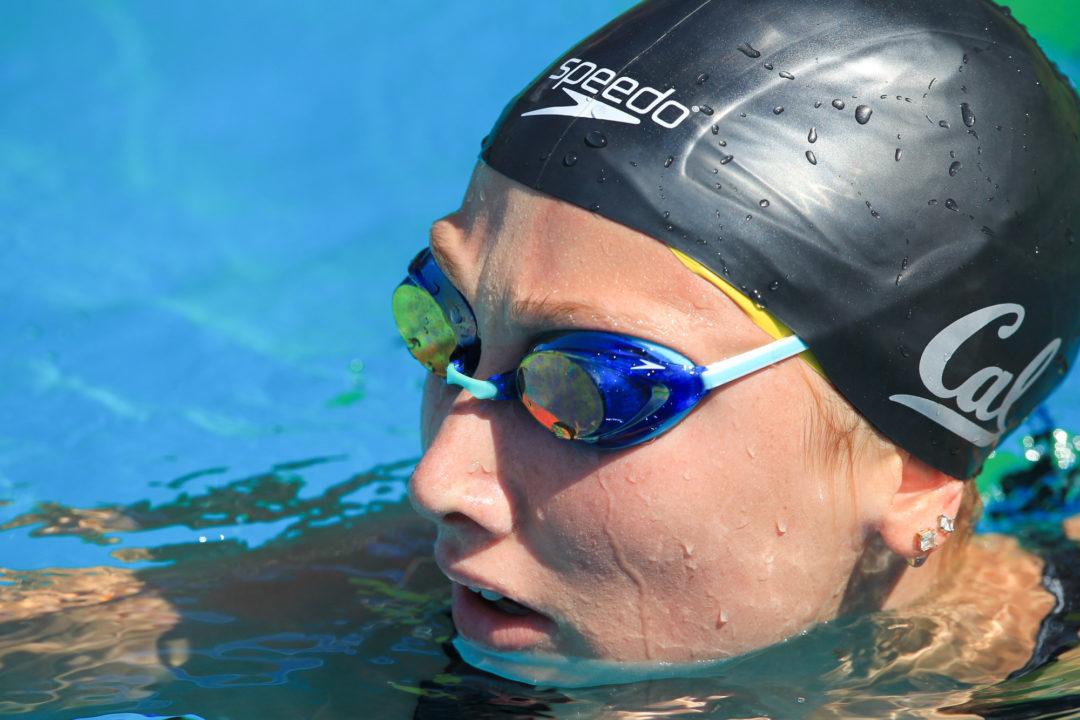 Amy Bilquist will be of huge importance to the Golden Bears as she enters her senior season. Current photo via Tim Binning/TheSwimPictures.com

Thanks to the outstanding racing from Kathleen Baker and a very deep sprint free group, Cal secured a 2nd place finish at the NCAA Championships behind only Bay Area rival Stanford. The Golden Bears finished as high as 2nd in three different relays, while Baker won the 200 back crown in NCAA and American record fashion and Abbey Weitzeil found her way to the A final in the 50 and 100 frees. Freshmen Robin Neumann and Sarah Darcel delivered, both reaching an individual A final, while another rookie, Ali Harrison, helped Cal’s breaststroke problem with a very solid 58.8 400 medley relay split.

The top-end talent here is deep, and with Simone Manuel done at Stanford, Weitzeil will be in contention with Erika Brown for the 50 free title and Mallory Comerford for the 100 free title, pending any freshmen who could compete. Whether she wins or not is hardly too important, though– Weitzeil is one of the fastest sprinters in yards, ever, and she will keep relays in the title conversation while also bringing in a good 30+ points on her own.

Meanwhile, Amy Bilquist and Maddie Murphy were both 21 flat starts last year and went 1-2 in the 50 free B final. Katie McLaughlin has made considerable strides in her sprint freestyle game, and freshman Elise Garcia comes in at 22.6/49.4.

While more of a 200 freestyler, Neumann was a 48-low last season and will likely replace Baker’s 400 free relay leg to join Bilquist, Weitzeil, and McLaughlin. As far as the 800 free relay goes, we might see those same four again, though a substitution might be made if Coach Teri McKeever wants to save a big gun for another relay.

McLaughlin (4:39.4), Chenoa Devine (4:40.6) and Neumann (4:40.9) were all clumped together to lead the Bears in the 500 last year. McLaughlin could do either the 500 or the 50 on day 2 of NCAAs, but she may end up on all five relays and skip a day 2 individual since Noemie Thomas is graduated and off the fly medley leg. Whether or not that’s the case, these three would all be cusp B final scorers.

Baker out is tough, but Sarah Darcel scored in the 400 IM A final last year and raced the 200 IM B final as a freshman. Half of the 2018 400 IM A final is either graduated or has gone pro, giving Darcel a great shot to repeat in the top 8. Keaton Blovad‘s 1:55.7 from Pac-12’s would have B finaled at NCAAs, giving the Bears another option.

McLaughlin went up top for both butterfly events, touching 4th in the 200 and 6th in the 100. She should also provide very strong relay splits for the Bears, though Maddie Murphy may be called on for the 200 medley relay. A pure sprinter, Murphy could free up McLaughlin to focus on the other four relays and add a third event, or she might allow for McLaughlin to anchor the 200 medley giving Weitzeil more room to do something else. Individually, Murphy is a fringe player for a 100 fly B final appearance.

Cassidy Bayer is one of the best 200 flyers in yards in the incoming class, and could be a scorer in that event individually. Elise Garcia, too, is a very strong flyer with times of 52.7/1:56.6, so look for her to be another potential scorer for Cal.

Being in C+/B- territory is pretty darn good for the Golden Bears considering past seasons. Breaststroke may no longer be their Achilles heel, with 26-mid relay potential out of Weitzeil in the 50, and a sub-59 split from Harrison on the 400 medley was nothing to scoff at. Distance is the only roster group weaker than breaststroke, but Cal can get by with what they have, and Harrison is a fringe scoring option in the 100.

Freshman Rajic may develop into something great for Cal, coming in at 1:00.6 and 2:14.1, and she’s on the sprintier side of things which could be good for the 200 medley, too.

Cal lost Baker and Thomas, two huge talents, but their roster is padded with so much primo talent that they will fare just fine without them. Their freshman class is a bit more modest than some of the classes we’ve seen in the past (Baker-Bilquist-McLaughlin?! All in one class?!) but has the potential to bite, and the depth for relays paired with the fact that at least 7-8 women are poised to score on their own means Cal should be in good standing for another 2nd place finish.

The evaluation of CAL breaststroke is laughable here. No way a top 5 BR recruit like Rajic still gets the team a grade like C+ . . . long season and lots of training and racing ahead.

You must have missed the explanation for the grading. “C – projected on the bubble to score likely only a few (1-2) or no NCAA points per event.” Cal had zero scorers in either breaststroke event last year, though, as I noted, Ali Harrison is a fringe scoring option in the 100.

Rajic is from Illinois (my home state) and I am rooting for her to succeed at Cal, but the plain fact is that she is not at scoring level right now.

I stand by my data.

What data have you presented?

Take that for data!

Hear, hear. Clearly, you are the Tammy Wynette of data, and your vigorous support for the #1 public university in Alameda County is both palpable and commendable. Roll on you bears!

Ali Harrison dropped almost a second and a half as a freshman last year in the 100 breast to put her time easily within possible scoring range. Definitely more than 1-2 points this year if she can improve at all and swim as fast come NCAAs. C+ is a fair grade

1:00.6 would’ve only been good for 33rd at NCAAs last year. Something like 35 swimmers who were faster than her during the 2017-2018 NCAA season are returning, in addition to other incoming freshmen. I assume that they will all be training hard this year, but maybe some of them won’t.

Only 2 freshmen breaststrokers scored at NCAAs last year, so not sure that being a “top 5 BR recruit” is worth more than “scoring a few points at NCAAs,” which is what a C+ is.

Ali Harrison swam a 59.52 at PAC 12’s-that would have been 12th at NCAA’s. I suspect freshman jitters got her at NCAA’s-C+ seems about right.

She’s been a bit overlooked in this article I think (although unproven in yards).

Curious to see how Cassidy Bayer adapts to college swimming. Has been a bit stagnant in her performances but think Cal will definitely help her get back on track

Hopefully will put her on track towards Tokyo

Could have made this one a double article