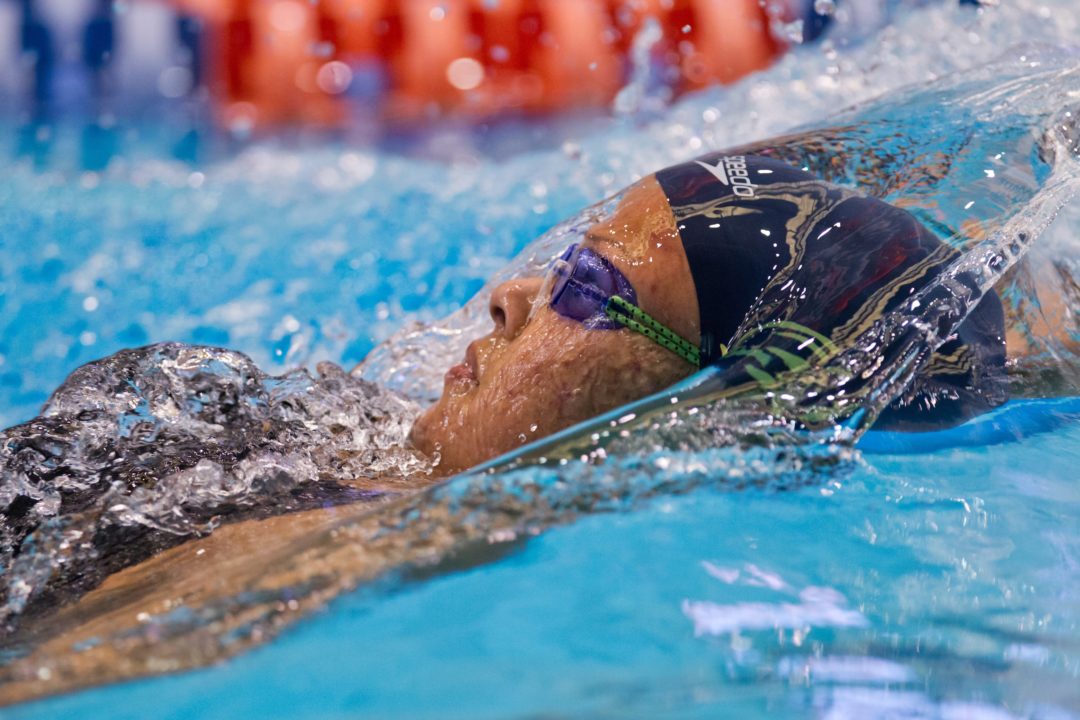 It was another day at the Georgia Fall Invitational, and the home-team Bulldogs put up more NCAA Automatic Qualifying times alongside an impressive field at their home pool. The Cal men and women were right there alongside them with several marks that will lock up spots in Indy already, and with some contributions from Auburn we saw NCAA qualifiers in almost every race.

The session didn’t start out great for them, as they again struggled in the 200 medley relay. The Cal women, thanks to a 23.51 leadoff from Rachel Bootsma, swam to a 1:36.29 in the 200 medley relay. Freshman Rachael Acker had a very good anchor of 22.24, but that still is the glaring difference between this year’s relay and Liv Jensen on the anchor last season. Bootsma, Caitlin Leverenz, and Cindy Tran will need to pick up a bit of slack. Cal put Liz Pelton on the anchor of their B-Relay, and she swam a 22.27 for them.

The Auburn women were 2nd in 1:30.01, followed by their B-relay in 1:38.73. Senior Lauren Norberg outsplit Olympian Micah Lawrence on the breaststroke leg 27.58-27.70, which will give head coach Brett Hawke something to think about going toward Nationals. Norberg has swum exceedingly well at this meet, and Lawrence really excels in the longer 200 breaststroke.

Georgia meanwhile was 4th in only 1:39.14. The Bulldogs are likely to get faster at SEC’s (and probably NCAA’s), but even so it’s going to be hard to see either of their medleys making the A-Final at NCAA’s.

In the men’s race, Auburn took a victory in 1:25.18 – almost as good as their swim from last year’s NCAA Championship. James Disney-May had a good anchor of 19.30, and Marcelo Chierighini was equally good on the butterfly leg with a 20.53. This relay is already really good in all four legs, and unlike the 400 could possibly be faster this way than they are when they add Arthur Mendes in January.

Cal might have been hit the hardest by graduations in this relay, and that showed with a 1:26.32 for 2nd. They’ll probably be forced to use Tom Shields on this relay again this season, though they might prefer to save him for the other four. Their backstroke leg (Marcin Tarczynski 22.14) especially hurts them, though a 19,13 freestyle anchor from Shayne Fleming helped make up a lot of ground.

Cal’s Caitlin Leverenz swam an automatic qualifying time in the 400 IM of 4:03.07. That’s about three seconds slower than she was at this meet last year. She may have lost her standing as the NCAA favorite this year when Florida’s Elizabeth Beisel swam a 4:00 at Ohio State today.

Georgia will probably be much more excited about the 4:05.26 they got from junior Melanie Margalis, also an NCAA Automatic qualifier and a personal best time as well.

Penn State junior Gabi Shishkoff isn’t all that well-known nationally but had a great swim to touch 3rd in 4:09.92. That’s an 8 second drop from her best time coming into this meet.

Josh Prenot stole a headline of his own for the Cal men with a 3:41.36 in the men’s 400 IM: also an NCAA Automatic Qualifying Time. Prenot is so strong across all four 200 yard races that anyone could see how good he could potentially be in this 400, but to be this fast this early was still a shock to all observers.

By our math, only Michigan’s Kyle Whitaker and former Florida Gator Ryan Lochte have been faster than that time as freshman.

Georgia’s own freshman Ty Stewart was 2nd in 3:45.41. That’s not quite an A-time, but should be enough to qualify for NCAA’s anyway. Martin Grodzki, better known as a distance freestyler, was 3rd in 3:48.55. That’s a new personal best for him.

Virginia showed very good IM depth, one of the reasons they win ACC’s every year even when their team isn’t built for NCAA’s, with David Ingraham taking 4th in 3:50.48 and Taylor Grey swimming a 3:51.64 in prelims before scratching finals, among others.

Auburn’s Olivia Scott got an automatic qualifying time in the 100 fly with a 51.83. She held off one of her biggest potential challengers for this NCAA title by beating Rachel Bootsma on the back-half of this race as Bootsma touched in 52.16.

Cindy Tran, another Cal butterflier, was 3rd in 52.41, followed by Georgia’s Lauren Harrington in 52.96.

Virginia sophomore Shaun Casey, though in the B-Final, swam her team’s fastest time of the year with a 53.66 to finish 9th overall.

After splitting a 45 on the 400 medley relay on Friday, Penn State’s Sean Grier won the individual 100 fly with a 46.79. That cut .04 seconds off of his old School Record in the race and was a tenth faster than Marcin Tarczynski, who was a 46.89 for Cal in 2nd.

Another Golden Bear, Will Hamilton who is the defending national champ in the 200 fly, looks like he’s going to have much better speed this year. A 47.26 here was 3rd. Georgia’s Doug Reynolds took 4th in 47.38 ahead of former Bulldog Mark Dylla, swimming as a rare non-collegiate entry in this meet, in 47.73.

Georgia’s Allison Schmitt won the 200 free in 1:42.25, and with her teammate Megan Romano only putting up a 1:45.44 (she had been so good to this point of the meet) in the B-Final, Schmitt easily dominated the field in this race. That gives her an NCAA Automatic qualifier, which is not a surprise for the defending Olympic champion.

Her London teammate Lauren Perdue also got an automatic qualifying time with a 1:43.62 for 2nd, followed by Liz Pelton in 1:44.0.

After swimming a 4:15 in the 500 on Friday, Georgia freshman Matias Koski followed that up with a 1:35.25 to win the 200 free on Saturday. He turned into the final 50 almost dead-even with junior teammate Jameson Hill, but a full second-faster split coming home gave Koski a win by a full second.

There were actually three freshmen in this A-final, as Cal’s Michael Haney was 5th in 1:37.89 and highly-touted Virginia freshman Nick Alexiou taking 6th in 1:37.96.

Georgia’s Melanie Margalis looks ready to slide into the role of Georgia’s top sprint breaststroker with a 59.34 NCAA Automatic Qualifying Time. That’s going to be a big help for the Bulldogs’ medley relays if she can repeat that time, or even drop a little bit, at year’s end in this 100 breaststroke.

She out-swam Micah Lawrence (59.69) to take this win in a preview of the SEC Championship battle. Lawrence’s teammate Lauren Norberg was a 1:00.67 for 3rd.

Georgia’s Annie Zhu had the next best time, though it was in winning the B-Final in 1:00.87.

Katis now needs to keep pushing himself in the second half of this year and then he could also earn an All-American honor in the race come March.

The top three swimmers in this women’s 100 backstroke were all Cal Golden Bears, all automatic NCAA qualifiers, and two were almost as fast as the winning time from last year’s NCAA Championship meet.

Cindy Tran showed that her experience and two-straight NCAA titles still count for something by winning in 50.42. That just beat out freshman teammate Rachel Bootsma and another freshman Liz Pelton in 51.26.

The winning time for Tran is now the third-fastest performance in history at any level, behind only her winning time last year and Natalie Coughlin’s winning NCAA time from 2002. Bootsma moved to 4th place on the list of fastest swimmers in the history of this race.

Virginia freshman Courtney Bartholomew was 4th in 52.28. There are a lot of great backstroking freshman in Berkeley, but there are just as many, like Bartholomew, scattered around the country as well.

Megan Romano was Georgia’s only A-finalist and finished 8th in 53.20.

We already knew that this year’s Georgia women’s relay could be one of the all-time greats coming into this meet. Even with defending NCAA Champion Megan Romano not having her best day of swimming, the Bulldog women became the first relay since 2008 to dip under 7 minutes in the fall semester when they won in 6:59.25.

As far as we can tell, with a 1;42.75 anchor from Allison Schmitt, this is the best fall-semester relay we’ve ever seen at the college level.

Cal was very good as well in 7:02.78 with a relay that included both Bootsma and Pelton, sandwiched by a Caroline Piehl leadoff and a Melanie Klaren anchor. Pelton had easily their fastest split in 1:43.28 on the third leg. Virginia took 3rd in 7:05.10.

Cal, considering all of the freestylers they’re missing, was 2nd in 6:26.30 with Virginia taking 3rd in 6:27.19. This is historically, and presently, the Cavaliers’ best relay, and what should be encouraging is that this time is 7 seconds faster than they were at this meet last year.

Does anyone know why Jacob Pebley isn’t swimming at the Georgia Invite?

Braden has mentioned him in the 100 back.

Pebley was sick for a weeks this Fall and hasn’t yet returned to full fitness. Stubblefield was injured earlier, but is nearly all the way back.

Great time for Allison Schmitt in the 200 free after her warm-up in the 500 free yesterday. And at the opposite very weird performances for Megan Romano after a good first day. A reader talked yesterday about Georgia swimmers who had a flu. Perhaps she is sick.
The women’s 100 back will be epic in March. I’d give an advantage to Rachel Bootsma for the win.