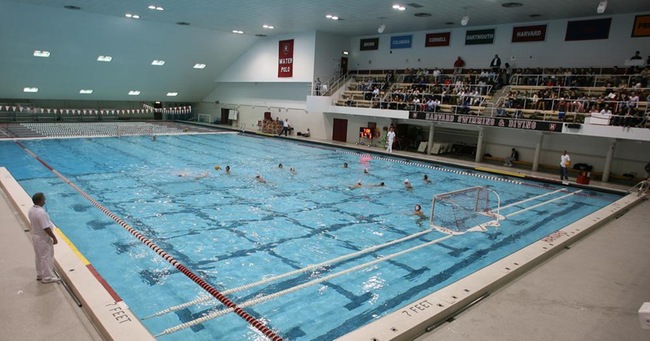 Harvard senior Daniel Chang picked up a winning triple for the Crimson as the men and women both beat Ivy League rival Penn last weekend. Archive photo via Harvard Athletics

Hernandez was a 100 fly B-finalist in 2018 and 2019 at the CIF Central Coast Section Championships, and he’s a Futures qualifier in that event, too.

Harvard senior Daniel Chang picked up a winning triple for the Crimson as the men and women both beat Ivy League rival Penn last weekend. First, he swept the breaststrokes, posting a 56.52 in the 100 and a 2:01.36 in the 200. He closed out his schedule in the 200 IM, where he came from behind to narrowly beat teammate Michael Zarian, 1:49.59 to 1:45.95.

The Crimson’s 200-yard medley relay team of Will Grant, Jared Simpson, Umitcan Gures and Mahlon Reihman set the tone touching the wall with a time of 1:29.67 – one second ahead of Penn’s quartet. Harvard’s B squad, Eric Whisenant, Daniel Chang, Michael Zarian and Ryan Linnehan collected two points for the Crimson finishing third with a time of 1:30.65.

Harvard Highlights
– First-year Will Grant continued his solid first year finishing first in the 100- and 200-yard back with times of 49.30 and 1:46.05, respectively, while clocking in a time of 50.04 in the 100 fly to finish fourth.
– Sophomore Umitcan Gures finished first in the 100 fly with a time of 47.89 and currently holds the team’s top-three times in the event this season.
– Additionally, Gures posted a time in the 50 free to place second – .21 seconds behind Penn’s Nathaniel Cunnan.
– Harvard moves to 75-2 against Penn all-time.

Next Up
Harvard is off for two weeks, preparing for the annual, two-day H-Y-P meet on Jan. 31 and Feb. 1 in Princeton, N.J.

The Crimson began the day strong, finishing back-to-back in the 200-yard medley relay. Harvard’s A-squad of Felicia Pasadyn, Jaycee Yegher, Addie Rose Bullock and Mei Lynn Colby touched the wall two seconds ahead of the quartet of Athena Ye, Kennidy Quist, Darlene Fung and Kate Hazlett to set the tone of the meet.

First-year swimmer Felicia Pasadyn registered a pair of first-place finishes, including in the 500 free. In one of the two long distances events of the day, Pasadyn came in with a time of 4:51.00 – the second-best time of the season. Her second first-place finish of the day came in the 100 back (55.59), while teammates Matti Harrison (57.34) and Athena Ye (57.54) finish third and fourth, respectively.

In the diving portion of the competition, first-year Evie Geier on the 1-meter board posting a score of 264.59. Right behind her was fellow first year Elizabeth Miclau with a score of 263.39. Miclau also finished first in the 3-meter, scoring 297.08.

Next Up
Harvard is off for two weeks, preparing for the annual, two-day H-Y-P meet on Feb. 1-2 in Princeton, N.J.

PHILADELPHIA – The University of Pennsylvania men’s and women’s swimming and diving team went toe-to-toe with reigning Ivy League champions, Harvard, in the Ivy League regular season finale but were both dropped in narrow results.

Recapping the Penn Women
Catherine Buroker—a 2019 NCAA Championships-qualifier and two-time Ivy League champion—continued to rip through the pool in 2020. She took Penn’s first victory of the day with a first-place finish in the 1,000 free after a 10:06.43 finish. Grace Giddings finished second just seconds behind, reaching the wall in 10:09.10.

The Quakers followed up with another 1-2 finish in the 200 fly. Monika Burzynska and Anna Newnam were neck and neck for just about the entire race, but Burzynska pulled away with a quick final 50 to touch the wall in 2:07.20. Newnam finished just .02 seconds behind to take second place.

Serena Xue grabbed Penn’s third victory of the day after topping the field in the 200 breast. The senior developed a solid, one-second lead in the race’s first lap and maintained her lead, finishing in 2:20.42.

Recapping the Penn Men
Despite dropping a narrow, 169-128 team loss to the Crimson, Penn had a handful of positive performances. Jacob Furlong started things off with a first-place finish in the 200 free as a clutch final 100 made way for a 1:39.60 finish, just .08 seconds ahead of Harvard’s Marcus Holmquist.

Sean Lee—who has been unstoppable for the Quakers this season—kept things going as he raced to a 1:47.32 finish in the 200 fly. Nathaniel Cunnan earned Penn’s third victory of the day, stretching to defeat Harvard’s Umitcan Gueres in the 50 free with a time of 20.50.

The Quakers, who have dominated the distance events in recent years, earned their final event victory with a 1-2 finish in the 500 free. Jacob Furlong and Will Kamps—both sophomores—landed the top two spots with Furlong topping the field (4:29.54) and Kamps finishing a hair behind (4:30.04).

UP NEXT
After closing out the Ivy League regular-season schedule today, the Quakers look ahead to their final dual of the season as they host West Chester on February 1.