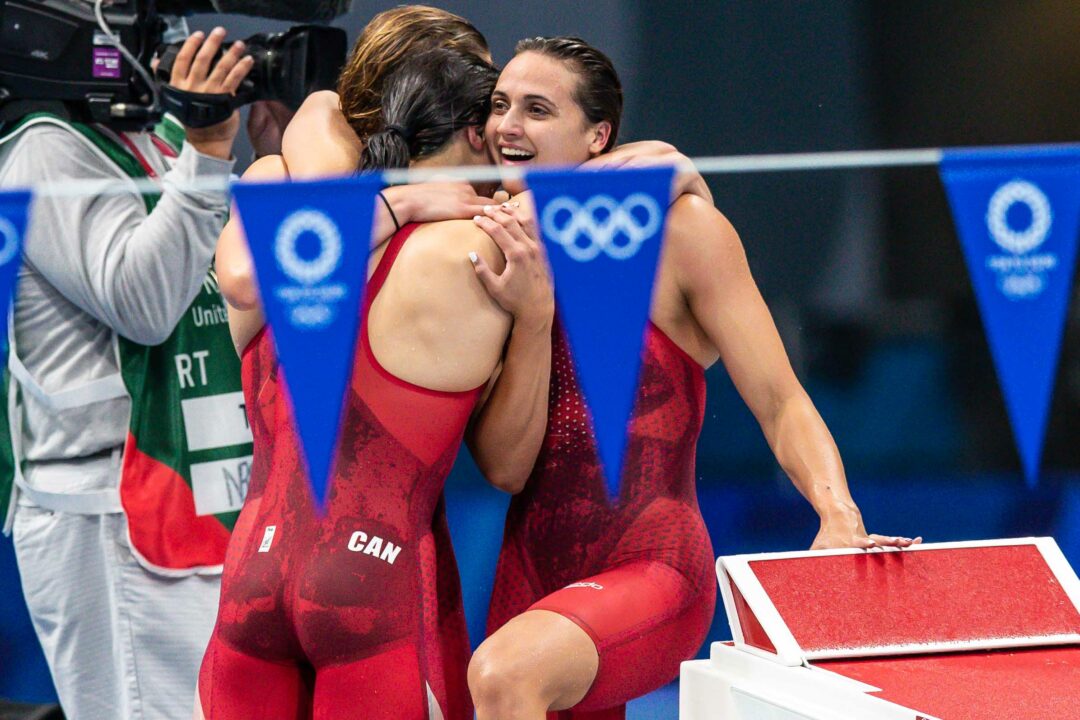 The quartet of Masse, Pickrem, Savard, and MacNeil broke the national record during day 2 prelims, placing 2nd in the heats to the USA. Archive photo via Jack Spitser/Spitser Photography

During the second of 2 heats of racing of the women’s 4×50 medley prelims at the 2021 Short Course World Championships, the Canadian women managed to down the national record in the event with a 1:45.17. The swim is an improvement upon the former time of 1:45.49 from the 2016 World Championships in Windsor, Canada.

Kylie Masse is the only common thread between Canada’s new record and the one they broke 5 years ago. Masse was around a half-second quicker this time around than she was in 2016 with a 26.12 and neared her own best time in the event, which sits at a 25.96 from October of this year.

Sydney Pickrem and Katerine Savard were right around where Kelsey Wog and Penny Oleksiak were in their respective breast and fly swims on the previous record-breaking swim. Maggie MacNeil was also close, but a little bit slower than Michelle Williams‘ 23.52 anchor leg, having swum a 23.64 here.

It seems likely that Canada will sub out Savard here for 50 butterfly Canadian record-holder MacNeil, leaving the freestyle leg open for Kayla Sanchez. Sanchez owns the Canadian NR in the 50 freestyle, which means the back half of that relay would feature the nation’s two quickest women in the history of that event.

Canada has already collected three medals at this meet, having collected 400 IM gold courtesy of Tessa Cieplucha, 200 free silver from Rebecca Smith, and a gold in the women’s 4×100 freestyle. That relay gold was actually shared with the USA and was a new Canadian record of 3:28.52 for the squad.

In the 4×50 medley relay, Canada’s national record-breaking effort was good enough for second place overall. The American contingent of Katharine Berkoff, Emily Escobedo, Claire Curzan, and Kate Douglass topped the field in a 1:44.50. Italy was third in the prelims behind Canada with their swim of 1:45.48 and China was fourth overall in a 1:45.57.