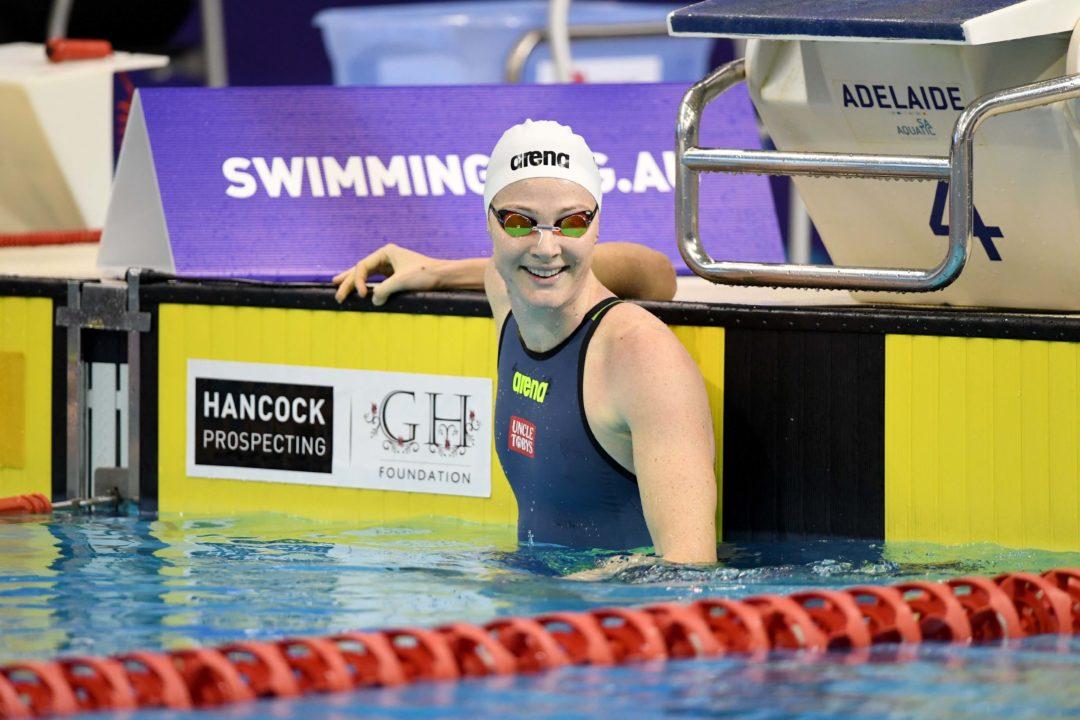 Cate Campbell anchored the Australians in 50.93, the fastest female freestyle leg in history, as they won gold in the 400 mixed medley relay in a new Commonwealth Record. Archive photo via Delly Carr, Swimming Australia

The Australian team of Mitch Larkin, Jake Packard, Emma McKeon and Cate Campbell posted the 2nd fastest mixed 400 medley relay in history to win gold at the Pan Pacific Championships in Tokyo in a time of 3:38.91. That breaks the Commonwealth Record of 3:40.18 set just a few days ago by Great Britain at the European Championships, and takes out their Oceanian and Australian mark of 3:41.21 from the 2017 World Championships.

Campbell anchored the Aussies in 50.93, the fastest freestyle leg in history, as they roared past Japan for the gold. That split for Campbell eclipses her 51.00 from the Commonwealth Games.

The Americans were the heavy favorites coming in after setting the world record in Budapest last summer, but went with a questionable lineup and ultimately were back in 3rd place in 3:41.74.

The lineup they used last summer was man/woman/man/woman, and that was their expected lineup once again. Lilly King is the top female breaststroker in the field, either Ryan Murphy or Matt Grevers is the top male backstroker, and Caeleb Dressel and Simone Manuel are slam-dunk choices on the back end. The team of Grevers, King, Dressel and Manuel set the world record last summer in 3:38.56.

However, they opted to use Kathleen Baker on the backstroke leg and Michael Andrew on the breaststroke leg instead of Murphy/Grevers and King. Baker set a new world record at Nationals in the 100 back in 58.00, but was well off that here in 59.29. Andrew split 59.21, much better than he did individually earlier in the session (1:00.04), and Dressel (50.50) and Manuel (52.74) were both off their best but still solid. The team may have underperformed a bit, but it was the lineup choice that really hurt them.

Yes. This was such a poor decision. Especially when you have basically the same relay team here. So disappointing

While Michael Andrew stepped up and put down a much stronger split than I would have predicted looking at his individual race, I don’t see how you leave King off of this relay. Michael, at his best, is middle of the pack among breaststrokers at this meet, while Lilly is the best by over a second and is a consistent performer. I don’t understand the logic.

Why do people think that it matters how you stack up against other breaststrokers? Why don’t the commenters get it? King was the best choice but not because she’s a second faster than other females.

It matters if you want to win

Why didn’t Canada use Masse on back? Or even Ruck???

For me there were 2 possible options, none like the race USA swum tonight it should have been:
Murphy
King
Dressel
Manuel
OR:
Baker
King
Dressel
Apple/Pieroni/Adrian/OTHER THEY’RE ALL CLOSE

However looking at Bakers swim here it’s clear that for me, the better option was the first

Where are splits? The meet resutls doesn’t seem to show mixed relay?

its there, its listed before the 400 ims

Thanks I see now – have to watch by day, not by event

The scary thing Cate made this split with a big back half, not a big front half as she usually does

If Cate is on her mental game here and can perform her best in the finals serious WR watch.

My point is in addition to the front half we all know C1 has, she seems to have added a strong backhalf into her arsenal as well.

As it looks right now, this is C1s race to lose if she is on her mental game.