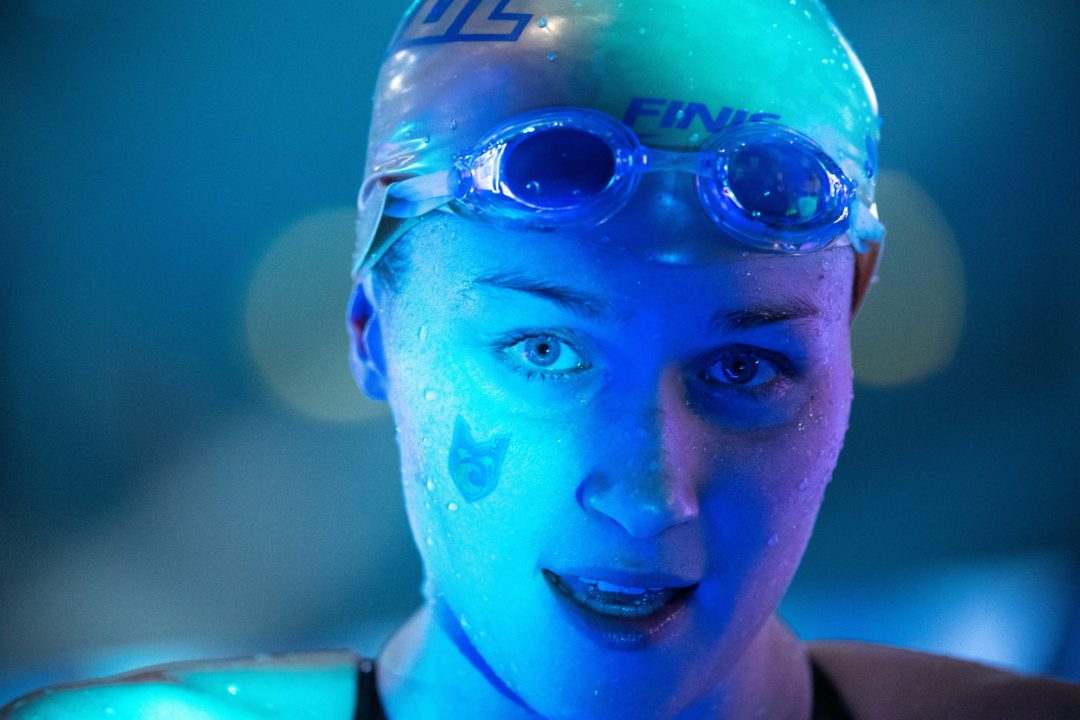 The Cali Condors have decided to give Olivia Smoliga a shot at the women's skins race on Tuesday, opting for the 50 backstroker over the 50 breaststroke. Current photo via Mike Lewis/ISL

The ‘skins’ races have been chosen for Match for of the 2020 International Swimming League season, and Tuesday’s high-points, meet-ending showdown will see at least one surprise pick.

In the skins events, each team enters 2 swimmers, as usual, into the 50 meter race. The event is swum as 3 rounds, separated by 3 minutes each, with the field whittled from 8 in round 1 to 4 in round 2 and 2 in round 3.

While Iron is deeper in the men’s freestyle events, the 50 breaststroke was the obvious choice, thanks to the emergence of Turkish swimmer Emre Sakci.

On Monday, Sakci won the men’s 50 breaststroke event by more than half a second, Jacked points from a whopping 5 swimmers, and broke the European Record in the event.

While there’s some risk here in that Michael Andrew of the New York Breakers, who are Iron’s primary competition for 2nd place, finished 2nd in the 50 breaststroke, that’s less risk that there would be in other events. You also stay away from Caeleb Dressel in his 2 best strokes (though he might still swim the 50 breaststroke skins after placing 3rd in the individual event). And Sakci has been so good, he’s earned the right to give it a shot.

The women’s race, on the other hand, was more surprising.

Not that it’s going to matters, as the Condors are already 100+ points ahead of the field and should be mathematically secure in the team win by the time the skins event rolls around.

Lilly King cruised to yet another victory in the individual 50 breaststroke on Monday, swimming 29.16 to keep her ISL unbeaten streak across all events alive. She didn’t Jackpot as many points this time, however, stealing scores from just 3 swimmers.

Olivia Smoliga, on the other hand, won the 50 back comfortably as well and stole points from 3 swimmers.

While King gets a lot of accolades, Smoliga has been really good this season 2. Both will probably win their respective races and steal a decent number of points.

Understanding that it really doesn’t matter, this feels a little bit like a ‘reward’ choice for Condors head coach Jonty Skinner, giving Smoliga her shot now in a meet that is going to be out of reach.

Ultimately, the team scoring isn’t going to matter – the Condors should win the meet by more than 200 points. But when the finals come around, expect it to be back to breaststroke if the Condors get the choice – and they haven’t yet lost a women’s medley relay in ISL history.

I’m okay with this. As long as you think you’ll win the meet regardless, may as well give Smoliga and Nelson some experience racing skins just in case they are needed in a future meet where Cali doesn’t get to pick the stroke. If a team other than Cali or Energy wins the medley relay in the final I imagine they’d probably take a long look at backstroke to avoid King or Sjostrom.

I imagine most teams would want to stay away from Smoliga in backstroke as well, but if they go freestyle Olivia is probably going to be one of the choices, and if they go fly Nelson is a possible choice, although I would usually expect it to be Dahlia and Brown. Getting more swimmers used to the format is a good idea for the finals and in case something wonky happens.