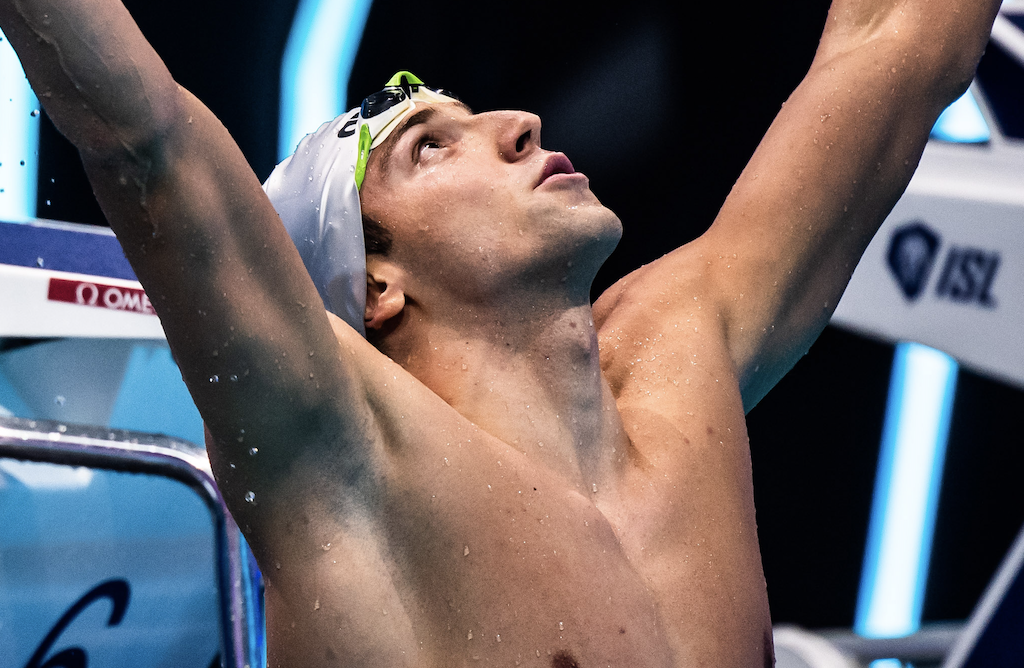 Emre Sancki has been a breakout star of the 2020 ISL season, and he could be the difference-maker for Iron on Tuesday in a close battle with the Breakers. Current photo via Mike Lewis/ISL

Two of the four positions in the ISL Match #4 appear to be pretty locked up after the first day of competition.

With a 111.5-point lead, the Cali Condors should be in control of the match, which is no surprise. The DC Trident, meanwhile, are 52.5 points behind in 4th place, and while that’s not insurmountable with Jackpots and skins races remaining, it would be a big hole to make up, with the one hammer in the corner being that Linnea Mack, who didn’t look as good Saturday as she did in her first match, has an outside shot at winning the ‘skins’ event.

The team scores after day 1 of Match 4:

In between, the Breakers, who started off hot, and Iron, who swam well later in the session, are separated by just 11 points.

So who’s going to finish 2nd, and by way of that give themselves a huge advantage in the race for top 8 spots and a place in the semi-final?

The Short Answer: It’s Dead Even, and will probably come down to skins, where Iron has an advantage.

If we roll forward results from Match 1, the Breakers go into the skins event with the same margin as they enter the day ahead of Iron, which is 11 points.

Day 2 Simulation, based on Week 1 times

Iron, as winners of the men’s medley relay, got to pick the men’s skins event, and they chose breaststroke. That’s a spot where Emre Sakci has been a breakout swimmer this season, winning both of his ISL races in the 50 breaststroke, including by half-a-second on Monday morning, setting a new European Record in the process.

The Cali Condors won the women’s medley relay and went with a bit of a surprise pick, the backstroke (more on that later), for the skins event. While Olivia Smoliga is the favorite there, Iron had the #2 and #3 swimmers in the individual event, Melanie Henique and Carolina Pilhatsch, in the morning. The Breakers, meanwhile, had Alicja Tchorz and Tevyn Waddell in that race, who were 5th-8th.

If the Breakers want to be able to hold on to that 11 point margin, they need a few things to happen:

One bright spot for the Breakers is that Iron’s 2nd male breaststroker, Ross Murdoch, was only 7th in the individual event.

The other bright spot is that, overall, the Breakers have been out-performing match 1 both in place and in time so far, while Iron has been on-par with their first match, if not a little off.

So, it’s possible that the Breakers can build that lead to more than 11 points by the time the skins rolls around.

But the good news, at the end of the day, is that we’re going to have at least some drama in Match 4, which is not something we can say every week.

Root for NYB but feel that Iron has better chance. Will be fun anyway.

Michael Andrew is overrated. His training does not work. His training is tainting youth swimming because ignorant parents and novice coaches think 2k yardage is sufficient to swim fast. Problem is it requires complete discipline. Otherwise it is garbage.