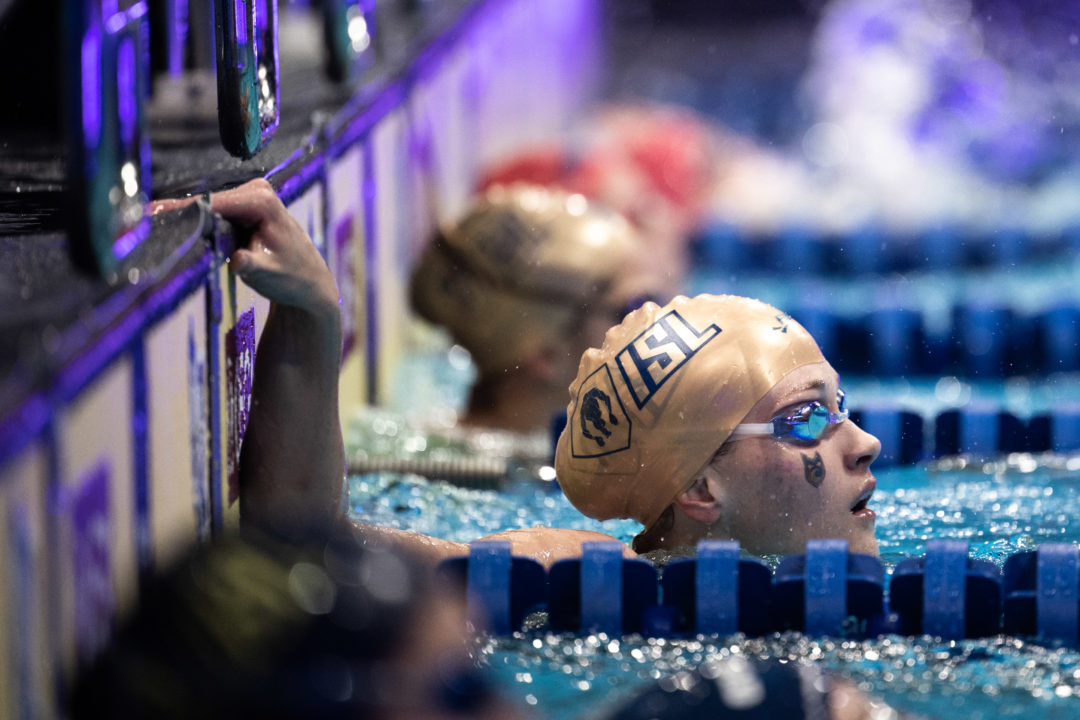 Olivia Smoliga was a key for the Condor women in winning both the free and medley relays on day one of the ISL's fourth match in Budapest. Current photo via Mike Lewis/Ola Vista Photography

The Cali Condors won three of the four relays contested on the opening day of the International Swimming League’s fourth match in Budapest, helping the club land a decisive 111.5 point lead at the halfway mark.

The key for the Condors was depth, particularly in the free relays, where all of their swimmers had splits close to the top of the rankings (rather than relying on one crazy-fast swim).

Ranomi Kromowidjojo gave Iron the early lead in the race, but Olivia Smoliga had a strong swim, just over two-tenths off her lifetime best (52.32), to set Cali up for what was to come.

Allison Schmitt continues her string of impressive swims this season with the fastest leg here, going third for the Condors. Schmitt’s swim extended the lead Erika Brown (52.84) had handed off to her, and then Natalie Hinds (52.57) gave the club four 52-second swims for the decisive win by over two seconds.

Margo Geer and Abbie Wood also had notably fast splits in the race, helping the Trident and Breakers take second and third, respectively.

While it wasn’t quite a 45 like we saw him do multiple times in his first appearance of the season, Zach Apple still had a strong lead-off for the DC Tridents nonetheless, handing the club the early lead. After what Jacob Pebley managed to do swimming second (46.46), the duo led the team to a solid third-place showing.

Kacper Majchrzak, who was 46.90 with a takeover on this relay in the first match, stepped up for the Condors going 46.80 on the lead-off.

Similar to the women’s team, Cali’s men reeled off three 46-mid splits to earn a relatively comfortable win in 3:06.11, led by Caeleb Dressel in 46.35.

As previously mentioned, Pebley’s split was a standout for DC, almost a full seven-tenths faster than he was on this relay in the first match, and Thom de Boer, Marco Orsi, Pieter Timmers and Emre Sakci all hit 46s for the second match in a row.

Cali’s excellence was fully on display in the women’s medley relay, as the club produced the fastest split on three strokes and the second-fastest on the other. Olivia Smoliga and Beata Nelson put them 1-2 right off the bat, and then Lilly King, Kelsi Dahlia and Hinds finished things off for the ‘A’ team.

Molly Hannis, Brown and Schmitt joined Nelson to get the job done and claim second, giving the Condors a whopping 32 points for the event.

The women’s breaststroke in particular was extremely elite in this race, with six swimmers splitting sub-1:05. Bethany Galat, who didn’t race either this relay or the individual 100 breast during DC’s first match, was second to King in a blazing 1:04.26, helping to propel the Trident past the NY Breakers for third in the race. Lindsey Kozelsky was also 1:04.55 for DC’s ‘B’ team after splitting 1:05.75 in the first match.

Kromowidjojo had a strong 56.99 fly leg for Iron coming off a 58.22 individual swim earlier in the session, and we can’t overlook Kasia Wasick‘s incredible 51.59 anchor for the Breakers. Wasick certainly has the hot hand right now after winning the 50 free in 23.43.

The lone non-Cali relay win of the day went to the Iron men, who had three solid legs coupled with a tantalizing breaststroke split from Emre Sakci that earned them the victory.

Sakci and New York Breaker Marco Koch wowed everyone with what they did individually during the session in the 50 and 200 breast, respectively, and both followed with 56s here in the medley (with no one else in the field sub-58). Sakci’s 56.15 was well under what he did in the first match (56.83), and is the third-fastest 100 breast relay swim we’ve seen this season (trailing Ilya Shymanovich‘s 56.06 and Nicolo Martinenghi‘s 56.09).

Koch’s 56.78 moved the Breakers up from eighth to second, and put them in the running to take the runner-up spot at the end, though they were edged out and ended up fourth.

Caeleb Dressel had a solid 58.11 breast split swimming his third-best stroke, while Marcin Cieslak was the lone man sub-50 on fly for Cali’s ‘B’ team. Had he been swapped with Coleman Stewart, who was 50.85 on the ‘A’ squad, the Condors would’ve moved up one spot at the finish.

The backstrokers were relatively even, led by Pebley who knocked almost six-tenths off his showing from the last match in 50.80.

Apple was the star amongst the freestylers once again, carrying DC from fifth to second with a scintillating 45.46. Majchrzak had another standout split for Cali in 46.06, getting them by the Breakers for third.

-This meet has been a bit less impressive with 3 of the weaker teams.
-Many freestylers swam faster on the medley relay than the free relay. Free relay splits were a bit lackluster with no 51’s or 45’s but we saw those in the medley relay
-Pebley shows off his freestyle skills with the 2nd fastest flying split.
-Mack having a less impressive showing.
-Koch building range with 56 split, 200 breast opening split of 58-point would’ve beat a few relay legs.
-I’m pretty happy about Abbie Wood, primarily an IMer, splitting 52.60. Last season she had almost no role.

<quietly> That Townley Haas split is very solid. If tapered Townley shows up for the final, it’s entirely possible that he’s one of the favorites in the 200/400, and if Cali gets Fink back at full strength, their men get closer and closer to their women.

Anybody wondering what impact this will have on the Olympics? Apart from International swimmers who attend college and/or train in the US, the opportunity for so many athletes to interact together is limited. Fast forward to the Olympics after these swimmers have been training together, competing together, even on the same relays, and what the atmosphere will be. Obviously representing your own country in the Olympic Games is incredible, but wondering if there will be any difference since they know the athletes in the lanes next to them a bit better.