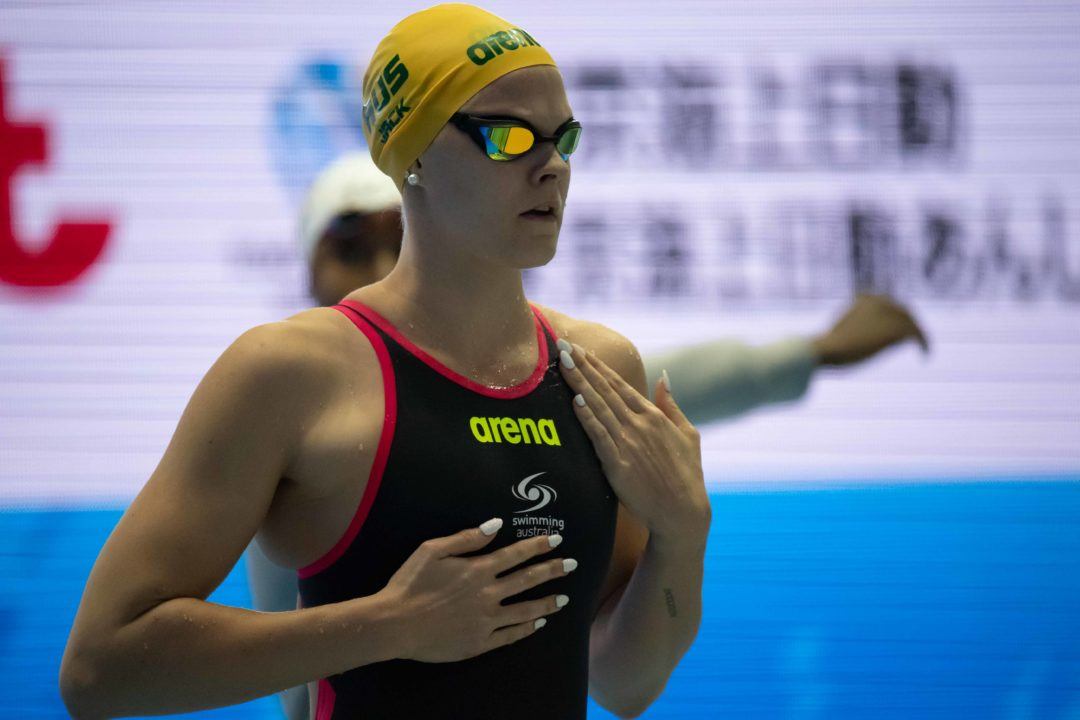 Amidst swimmers being more vocal about anti-doping at this World Championships than any other, Australian Shayna Jack tests positive from late June. Archive photo via Mike Lewis/Ola Vista Photography

Just days prior the start of these FINA World Aquatics Championships, Aussie freestyle ace Shayna Jack announced her sudden withdrawal from the world’s biggest swimming competition outside of the Olympics.

As we reported on June 14th, Jack stated via her social media,”It is with great sadness that I have to withdraw from world championships due to personal reasons.”

With the ambiguity arose questions and speculation, which have now been confirmed, as the 2017 World Championships medalist has tested positive for a banned substance.

Once again via Instagram, Jack reveals she has tested positive, but says, “I would never intentionally take a banned substance that would disrespect my sport and jeopardize my career.”

The St. Peters Western athlete further states, “Now there is an ongoing investigation and my team and I are doing everything we can to find out when ad how the substance has come into contact with my body.

The exact substance has yet to be revealed, but the Australian Sports Anti-Doping Authority (ASADA) says the drug test was conducted on June 26th. Jack is under provisional suspension while the investigation into the situation now begins.

According to the Swimming Australia statement, under the specific legislation governing Australia’s drug-testing regime, Swimming Australia is notified of any adverse test result as is WADA and FINA. Under the process, all details are required to remain confidential until ASADA has completed its investigations, the athlete is afforded due process and an outcome determined.

“Under our system, if a swimmer returns an adverse test, they are automatically given a provisional suspension and stopped from competing until such time as the ASADA process is complete and an outcome determined.

“As you would expect we are bitterly disappointed with allegations a swimmer has a prohibited substance in her system although it is important to point out that the matter is yet to be determined. We will continue to provide appropriate support for Shayna. We will also provide support for our team members who are still in Korea and our team and our organization will continue to reaffirm our zero-tolerance approach.”

Interested in knowing how would Horton protest this time. Maybe refuse to get on the team bus?

Shayna wouldn’t be on the bus seeing as she’s not even on the same continent.

In a classic example of why people in glass houses shouldn’t throw stones, Shayna Jacks cheating now paints Horton into a corner. He campaigned vigorously against Sun Yang for his drug history and against FINA for going soft on drug cheats. Now, according to his definition, Jack is a “drug cheat” and must be treated accordingly.
This also raises the question of whether Horton would have made his spectacularly public stand had he known a team-mate had just tested positive?
So too the Australian Swim Coaches and Teachers Association who also took a long handle to drug cheats, recommending life bans for them. They, too, must now be reconsidering their stance.

Aussies caught red-handed whereas Sun was cleared and acted within his rights according to FINA ruling.
Mack Horton looking like a Massive Hypocrite now.
Why isn’t he condemning Shayna?

And loads of Aussie bogans now defending their swim cheat.
Karmas a bitch ain’t it?

Does Mark Horton share the same system as Shayna Jack ? Looks like he’s got a lot of explanation to do.

Jack tested positive June 26th…. OZ swimming had 3 weeks to release this. They should have on June 27th. They didn’t and tried to hide it, leaving Mack Horten out to dry, with his now extremely hypocritical protests of Yang. Scott too for that matter. Now Horten looks the fool as does OZ swimming. Mistake after mistake and the terrible optics will cloud Australian swimming into Tokyo 2020.

Results are never known immediately . Takes time to get test results . No one knew until weeks later

i mean seriously Horton could have not known. that’s a bold assumption to say that Jack was bringing him in and that Horton is sociopath enough to make a scene on a world stage when he knew that she was taking a banned substance. i think he probably didn’t know

Someone is missing from all the glamour and news, he will remain silent on, no, actually behind, the podium.

This takes some shine off what has been a very strong meet for Australia. Instead of coverage of the results the media will go to town on this (understandably). Team officials have thrown Mack under the bus a bit as well, I know they weren’t aware that he would protest Sun Yang, but their management of the situation has left him vulnerable to obvious criticism now.