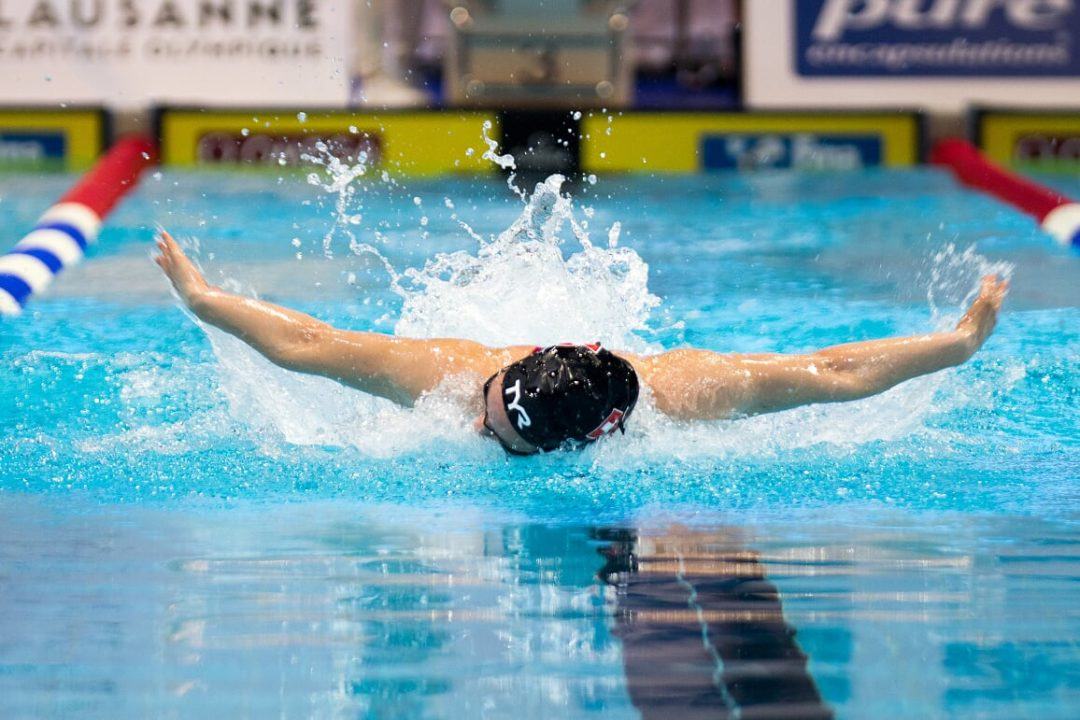 The Wisconsin Boys Division 1 High School State Championships ran earlier this week at Waukesha South High School. The Division 1 meet is for the state’s larger high schools, compared to Division 2 for the smaller schools which went down 2 days later on February 8th.

The Sun Prairie boys came back from last year’s 3rd place finish to claim the victory, scoring 232.5 points to Greenfield’s 211 for second and Arrowhead’s 192 for third.

Emilio Perez came out on top in both the 50 freestyle and 100 butterfly. Along with the wins, the Greenfield senior downed the Wisconsin high school state records in both of the events.

In the 50, Perez’s winning swim of 19.81 made him the first high school swimmer from the state to go sub-20 in the event. He took the record from Ben Wiegand who set the previous record at last year’s meet with a 20.16. Now the former record holder, Wiegand was actually also in the 50 freestyle final, swimming a 19.92 for a best time. Sheboygan North junior William Hayon came in at third, hitting a 20.19.

Both Perez and Wiegand are seniors this year and will make the move to the NCAA next season. Perez originally committed to swim at Arizona State but has since changed his commitment to the University of Alabama according to his Instagram bio. Wiegand on the other hand will stay in his home state and is set to swim at the University of Wisconsin.

Perez’s second state record came in the form of a 47.27 100 butterfly, downing Kyle Bubolz‘s long-standing mark of 47.71 from February of 2003. Bubolz was an accomplished high school swimmer before beginning his successful collegiate career at Northwestern. Bubolz earned a number of accolades at as a Wildcat, including 19 All-American honours, 12 Big Ten Championships, and a national titles. Bubolz, Mike Alexandrov, Bruno Barbic, and Matt Grevers were a part of the somewhat legendary 400 medley relay at the 2007 NCAA Championships. The team broke the NCAA record en route to victory in the event and earned Bubolz, Alexandrov, and Barbic a spot in the NW Athletics Hall of Fame in 2014 (Grevers had already been inducted).

Perez’s swim knocked a decent amount of time off his PB of 48.78 from last year. 50 freestyle bronze medalist William Hayon came in behind Perez with a 47.56 and Oscar Best rounded out the top 3 with a 49.89.

While Hayon didn’t pick up any individual wins and didn’t race the 100 freestyle, he threw down the fastest split in the field on the 400 medley relay. Anchoring for Sheboygan North, Hayon hit a 42.76 split which was the only swimmer to crack 41 with the next fastest being JP Anhalt’s anchor split of 44.01 for Sun Praire.

Another double winner at the meet was Perez’s teammate Jackson Lustig who won the 200 IM and the 500 freestyle. In the former, Lustig clocked a 1:50.63 which was nearly 3 seconds ahead of second-place finisher Devin Testin (1:53.25) and third-place finisher Lance Johnson (1:53.29). That swim for Lustig was the fastest he’s even been, improving upon his previous best of 1:53.82 from November 2020.

Despite Perez and Lustig’s double wins, Greenfield was not able to hold off Sun Prarie for the win. Ben Wiegand was actually the only individual winner from Sun Prairie at the meet, taking the victory in the 100 freestyle with a 44.08.

Will Hayon was 42.7 anchoring the 400 free relay which is uh, pretty quick for a junior

Very impressive right around where Adam Chaney was his jr year but that doesn’t really mean anything to compare the two.

It should also be noted that Bedalov — in his role as state swim coaches association (WISCA) president — and longtime Waukesha South/Catholic Memorial head coach Blaine Carlson (the state meet was moved to the Waukesha South pool after longtime host county Dane County issued a Covid-19-related ban on swim meets) — were instrumental in advocating for, and helping to… Read more »

Greenfield would of got the state record in the 200 Medley Relay if they had Leo Gandaria on instead of freshman Liem Funk. Just saying the freshamn 22.7 would of been replaced with Senior Leo’s 20.6

That record will stay for a while. Kind of hard to beat a relay with a 21.00 fly split.

And anyway why even deal with hypothetical times? Madison West could have been 1:29 in 2019 if they had Jekel on the back and Bensch on the fly.