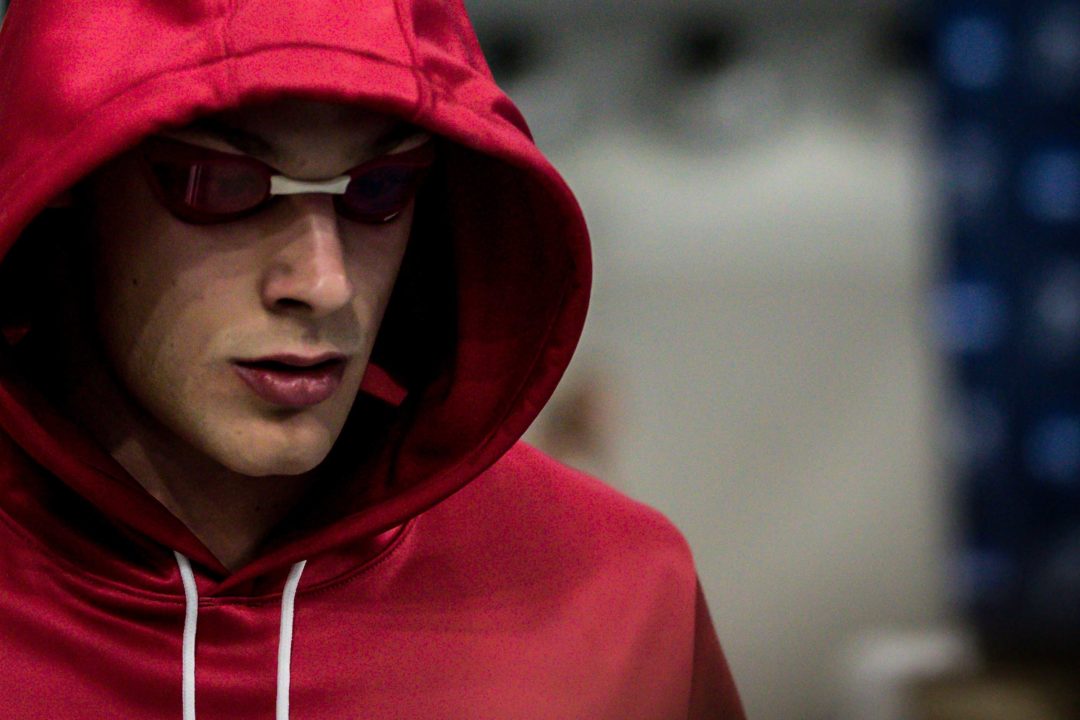 Indiana sprint star Bruno Blaskovic has been diagnosed with a fractured vertebra, and will be out of the pool for six to eight months. Stock photo via Jack Spitser/Spitser Photography

Indiana sprint star Bruno Blaskovic has been diagnosed with a fractured vertebra, and will be out of the pool for six to eight months. The injury will not only keep the senior from competing in the upcoming Men’s Big Ten Championships and NCAA Championships, but the Tokyo Olympics as well, where he was likely to represent his home country of Croatia.

The fracture, which is to Blaskovic’s L4 vertebra as reported by the Indianapolis Star, will require Blaskovic to wear a back brace for an estimated 6-8 months. According to the report by the Indianapolis Star, the cause of the injury has not yet been officially determined, though IU head coach Ray Looze believes the months of unsupervised training during the beginning of the COVID-19 pandemic could have been a contributing factor. Blaskovic told the Star that when he returned to Croatia, and the country subsequently went into lockdown, he tried to stay in shape by lifting weights in his garage.

Blaskovic told the Star that he wasn’t really able to identify the specific moment he noticed the injury, but noted he was experiencing tightness at his last meet, a January 16th dual with Michigan. He went on to race through the back tightness, then told the Star “After that, I couldn’t really swim anymore.” Speaking on Blaskovic’s inury, and his absence from the Hoosiers’ roster for this championship season, Looze said “You don’t lose your best swimmer and not have it affect you,” adding “This year is a battle of attrition.”

Blaskovic had a decorated career with IU, winning Swimmer of the Meet at last year’s Men’s Big Ten Champs. At last year’s Champs, Blaskovic won the 50 free and 100 free, came in 2nd in the 100 fly, and helped IU’s 200 free, 400 free, 200 medley, and 400 medley relays to victory. He was amongst the top medal contenders in his events for the 2020 NCAAs, before they were cancelled due to the pandemic.

Now without their top sprinter, the Indiana Hoosiers will look to improve upon their 3rd-place finish from last year’s Big Ten Championships. IU are the defending champions in all relays except the 800 free. The Men’s Big Ten Champs will be held in Columbus, OH, from March 2-6.

Speedy recovery for you Bruno. Sorry for your Olympic dream being put on hold for 2021!

How can we watch the B1G championships?

Crushing news, indeed and I’ve been depressed about this for a few days. What a lot of people don’t know is that Bruno is a super young man and beloved by his coaches, teammates and Hoosiers everywhere. He will get through this setback and it will be a setup to a glorious comeback. Bruno, hang in there, we love you and remember…“We’re All For You!”

SING FOR ME BOYS AND GIRLS!

Blaskovic is a fighter.