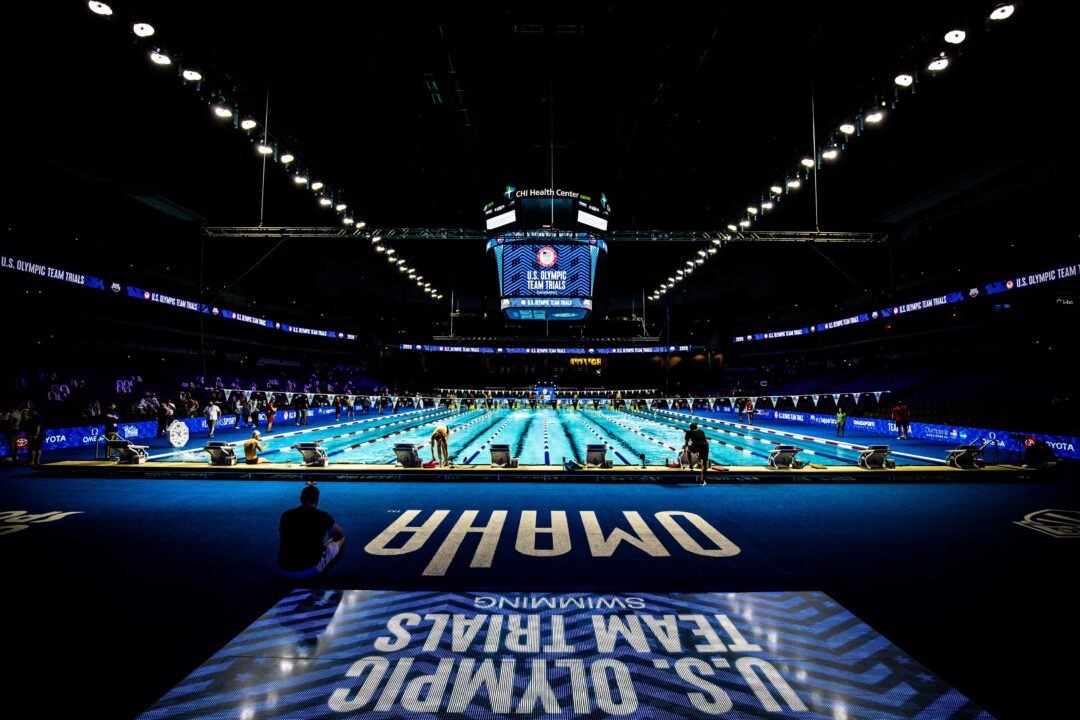 A look back at what was a whirlwind week in Omaha from a fan's perspective. Stock photo via Jack Spitser/Spitser Photography

So said Katie Grimes, the precocious 15-year-old who had just qualified for the Olympics with a heroic performance in the 800-meter freestyle. She was describing her post-race feelings, but she could have been speaking for every swim fan who followed the Olympic Trials. It was a week filled with a remarkable number of highs and lows. Having had the good fortune to spend the week in Omaha, I came away from the experience in awe of what unfolded in the pool – and outside it.

Attending Olympic Trials is a spectator experience with few parallels. Start with the duration and the sheer volume of activity. Other championship events are either held during a single day (the Super Bowl) or are spaced out across multiple days, with breaks along the way (the World Series or the NBA Finals).

By contrast, Olympic Trials plays out across seven consecutive days and there is a “Groundhog Day” element to it, with races held every morning at 10 and every night at 7 or 8. The routine includes casually-clad swimmers, parents, coaches, and fans (often outfitted in identical shirts, bearing the name of their favored swimmer) streaming into the cavernous CHI Health Center – an aquatic equivalent of the Muslim pilgrimage to Mecca, complete with Saudi-style stifling air temperatures (they reached 106 on Thursday). Time outside CHI goes to eating, sleeping, analyzing results, watching the NBC Sports videos of each evening’s races on YouTube, and plowing through SwimSwam stories, as well as the hundreds and hundreds of comments accompanying the recaps of the morning and evening events. That cycle repeats itself day after day after day. (Perhaps the week’s most entertaining article, on the swimmer ritual of shaving one’s body hair, was penned by Pat Forde of Sports Illustrated. And, in a nice twist, his daughter, Brooke, qualified for the Olympic team as a relay swimmer.)

Suffice to say, every swim fan should experience Olympic Trials live. But idly watching the swims from one’s seat in the arena means missing out on some of the storylines. I was reminded of this shortly after the women’s 1500, when I departed my seat to search for another vantage point from which to watch the next event. (Because the arena was limited to 50 percent capacity, spectators could sit just about anywhere they wanted.) I soon came upon a group of about 20 people in a semi-circle, all of them outfitted in Sandpipers of Nevada shirts. They were looking on as one of the Sandpipers, Erica Sullivan (a teammate of Katie Grimes), who had just finished second to make the team, was jubilantly hugging teammates and posing for photos – with hair still wet and wearing only the team’s distinctive TYR suit. The group’s beaming smiles conveyed bliss for what Sullivan had achieved, but also knowing appreciation for the years of effort – by her, as well as her parents, coaches, and teammates – that went into reaching this pinnacle in the pool.

While Caeleb Dressel’s swims lived up to the meteoric high expectations that every swim fan had for him, I was also taken by what I saw of him outside the pool. This included encountering him in my hotel lobby, sitting alone, headphones perched on his head, engrossed in a book. I couldn’t see the title, but I’d like to think his reading inspired him to wax eloquent a few days later. After the medal ceremony for having won the 100-meter freestyle, he recounted swimming the event as a 15-year-old, at the 2012 Olympic Trials, and finishing well out of the medal hunt. (He tied for 152nd place – out of 165 swimmers.) He went on to describe sitting in the arena’s upper deck and admiring the swimmers below. Turning to the present, he summoned those younger than him to take up the mantle of fast swimming and focus on defeating him in the future. That’s not a sentiment you’ll hear from many elite athletes in any sport, but it’s one that reflects Dressel’s commitment to cultivating the next generation of swimmers.

For another swimming icon, Katie Ledecky, her victory in the 800 freestyle was never in doubt. But with about 25 meters remaining in the race, the crowd noticed a fierce contest for second place unfolding on opposite sides of the pool. And the crowd erupted when the aforementioned 15-year-old Grimes – way over in lane eight – finished .15 ahead of Haley Anderson (who had already qualified for the Olympic team). Grimes, who entered the race with only the seventh fastest time, dropped an unthinkable 10 seconds. She was too exhausted to immediately celebrate, and only did so when Ledecky coaxed her to do so. The moment became even more magical once she exited the pool. Rather than walking over to the NBC camera crew to join Ledecky for an interview, she had an extended and tearful embrace with her parents. (Fun fact: the Grimes time was almost exactly what Ledecky swam when she made the Olympic team as a 15-year-old in 2012.)

Up to that point, the most inspiring Trials moment came when the University of Michigan’s Jake Mitchell swam the 400 meter freestyle by himself – a setting that was probably without precedent in the history of the U.S. Olympic swimming trials. For extremely complicated reasons, he needed to lower his time by about 1.4 seconds – no small achievement – in order to secure a spot on Team USA. Once Mitchell’s swim began, the public address announcer provided the times during each lap. As it became clear that he was within reach of his goal time, the crowd roared its approval, with the volume steadily rising as Mitchell continued swimming. The arena exploded at the finish, as Mitchell swam faster than the Olympic qualifying time. The next day, Mel Stewart, 1992 Olympic gold medalist and SwimSwam co-founder, called it “one of the five greatest moments in the history of swimming.”

Olympic Trials has also been called “The Meet of Tears,” given all the swimmers who just miss making the team. And this year’s Trials had no shortage of tear-jerker moments, for swimmers and viewers alike. This included Annie Lazor winning the 200-meter breaststroke and struggling to keep her composure during the post-race interview with NBC, as she elliptically referred to her father having died a few months earlier. Similarly, Simone Manuel, after failing to qualify for the 100-meter freestyle final, spoke movingly and emotionally at a press conference about the health struggles she went through earlier this year. (Pro tip: watch the entire Manuel press conference. It’s riveting.)

On a personal level, I felt a certain frisson after seeing several athletes who I’ve written about and interviewed at high school championship meets – such as Torri Huske, Phoebe Bacon, and Andrew Seliskar – now occupying the national spotlight as Olympians. And Huske’s Olympic qualifying butterfly swim on Monday night coincided with a summer league swim meet near her home in Arlington, Virginia. Some of her teammates from Arlington Aquatic Club and Yorktown High School turned away from the routine meet to watch the historic race and broke into tears upon seeing the outcome – a story that just may have caused this swim parent to get a little choked up as well.

With the next Olympic Trials only three years away, it’s not too early to begin thinking about what the future of swimming holds. Grimes is already taking the long view. “Who knows,” she said at post-race press conference. “Maybe I’ll be like [Ledecky] nine years from now and there will be another 15-year-old.” And then she once again verbalized what so many fans were thinking about what she and other swimmers had achieved in Omaha: “It’s just crazy.”

Matt Rees, of McLean, Virginia, is a former White House speechwriter, president of the ghostwriting firm Geonomica, and founder of the Food and Health Facts newsletter.

I predict 2024 trials will not be in Omaha

I watched each night with my 2 year old and 6 year old girls. On NBC Olympics. We hope to go in-person in 2024!

In Adelaide last week, you had to basically sit in the seat number on your ticket. Plus swimmers were not allowed where spectators were seated. Interesting.

Another beautifully written article. Makes me wish I had been there!

Braden, now that all the Olympic trials are almost over when can we get a reranking of all the men and women swimmers before the Olympics?

I’m guessing #5 will be different.

Actual serious grammar question, shouldn’t it be “A homage”?

No. Words that begin with a silent “H” receive “an” as an article because they have no phoentic representation or audible sound.

The same but opposite rule applies to words that start with a vowel, but where the first sound is a consonant sound. Such as “unicorn.”

Say “a homage” out loud, and you’ll see how awkward it sounds.

This confused me too, as I usually pronounce the “h” in “homage,” so I write “a homage.”

After a quick Google search, Webster says both the pronunciation of the “h”and the silent “h” are accepted pronunciations of the word, so both “a homage” and “an homage” are acceptable depending on how you pronounce the word.

Interesting. I don’t usually hear people pronounce the “H,” but it appears that some people do.

There’s even a NYT article dedicated to the topic: https://www.nytimes.com/2010/11/07/magazine/07FOB-onlanguage-t.html

Interesting how many of these words of French origin we continue to treat the “h” as silent (as it is in French) while others we now pronounce the “h.” I suppose it’s just a matter of how languages change and evolve!