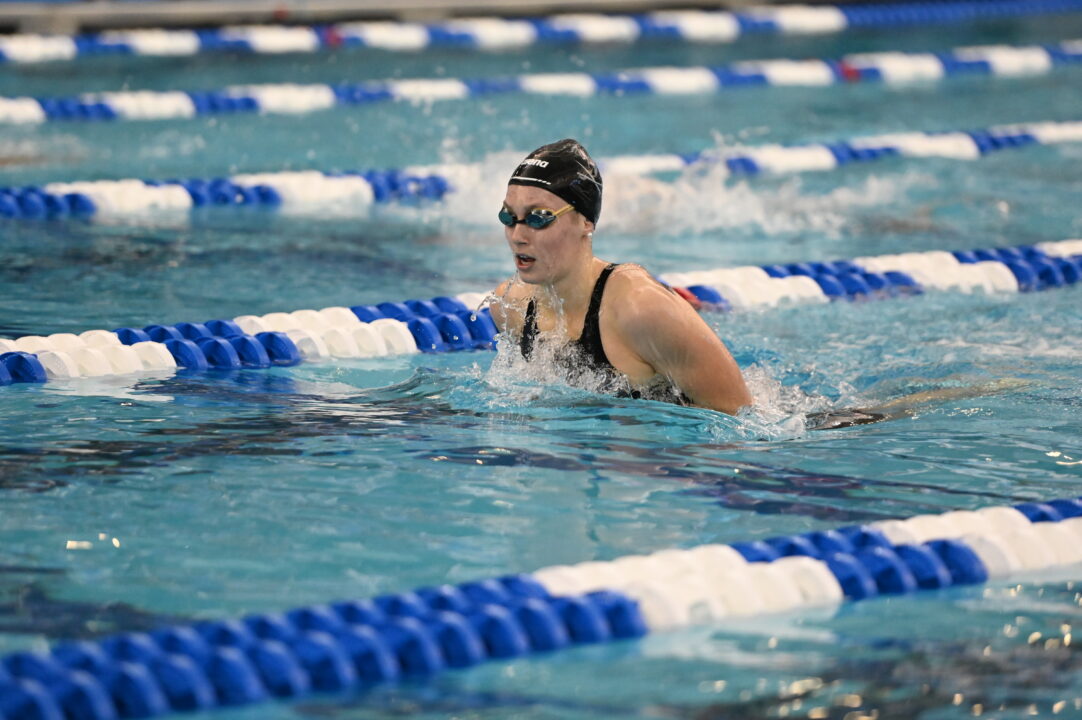 Alex Walsh of Virginia broke the ACC and meet record en-route to winning the 200 breaststroke at the 2022 ACC Championships. Archive photo via NCAA

On the final night of ACC Championships, Virginia’s Alex Walsh broke the ACC and meet record in the 200 breaststroke touching at 2:03.02 seconds.

Douglass did not swim the 200 breaststroke tonight, and instead won the 100 freestyle (46.81), touching just before teammate Gretchen Walsh (46.86).

During Saturday’s prelims session, Walsh was seeded with a “no-time,” which left her swimming in the first heat of the day. There, she finished way ahead of her competitors and posted a 2:05.11, which seeded her 1st heading into finals.

What’s Alex’s potential internationally in the future as far as making Olympic/Worlds teams?

Kinda like 2016 Maya Dirado, except br instead of bk.

I’ve retyped this comment about 4 times because every time I start to type it I talk myself into something different.

I think the 200 IM and 800 free relay are good bets for now. Beyond that? Limitless.

I wanna wait and see what happens with the 200 fly at NCAAs. It feels like she’s always one swim away from blowing our minds again. Maybe she’ll pop a 200 fly and we’ll have to start all over again.

Controversial statement: I think her impact as an American could be wasted. I’d love to see her get into the European mold and go race Mare Nostrums and Sette Collis and World Cups every year, do the Katinka Hosszu thing, and rewrite… Read more »

She is beauty she is grace

2.03 in the 200 breast
49 mid fly relay split
46.7 free relay split
We know what she’s capable of doing on backstroke.
Her versatility is impressive.
I want to see Alex Walsh train for the 400 IM so that she tries the IM double in 2024.
But maybe that’s not in her plans. 😆

Hansson 3x ACC champ, and would be 3rd-fastest on UVA’s roster…

Not to mention 4th at SC worlds