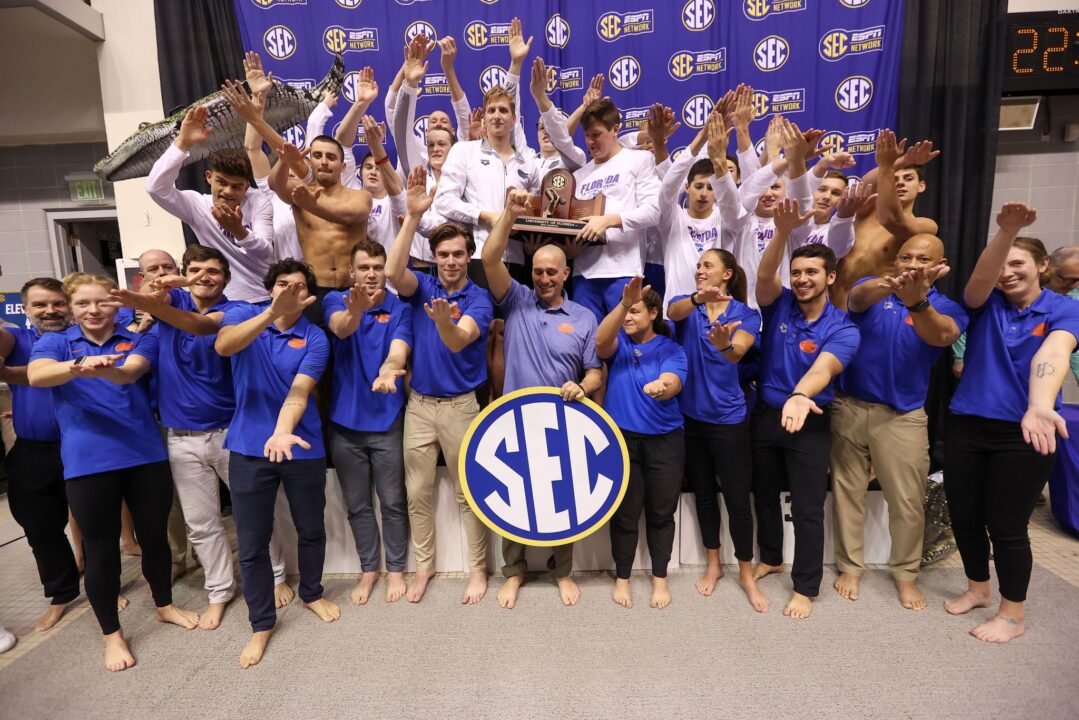 Georgia’s Dune Coetzee posted a ‘B’ cut time of 16:03.09 against Emory in her first-ever 1650 free, the fifth-fastest time in the nation this season.

A decade of work for the Florida Gators came to a point on Saturday when the team won its 10th consecutive SEC Championship in men’s swimming & diving.

That makes for the 43rd championship overall for the Gators (which includes the first 5 from 1937 to 1941), well ahead of Auburn, who have the second most at 18.

Auburn still has the longest streak of consecutive titles in the conference, though, winning 16 in a row from 1997 through 2012. When that streak ended, Florida’s streak began, and through two head coaches (the first 6 under Gregg Troy, and the last 4 under Anthony Nesty).

The Gators didn’t get their victory without challenges, though: at least two stars and defending SEC Champions, Bobby Finke and Dillon Hillis, were pulled from the meet due to COVID-19 protocols.

But the Gators still dominated this meet, amassing 1,414 points and beating 2nd place Tennessee and Alabama by 476 points.

The next-largest margin of victory in conference history came in 2004, when Auburn beat Florida by 303 points.

Florida has cracked 1400 points on three other occasions in their 10 year streak (the league only expanded to C Final scoring in 2013 when Texas A&M and Missouri joined the conference).

That included a clean sweep of the relays, even winning the 400 medley relay after their top breaststroker Hillis withdrew from the meet.

Kieran Smith, in his endless versatility, came up big for the Gators in this meet, winning the 400 IM even at what seems to be less-than-full-rest for the meet, and the sophomore Adam Chaney came into his own as a bona fide star by winning the 100 back and breaking Ryan Lochte’s school record.

That provided a monstrous statement for Florida as they rolled downhill to the title on Saturday. They scored 173 out of 362 available points in a single event. They outscored every other SEC team combined in a single event.

No Finke, no Hillis save for one relay, no Isaac Davis, no Will Davis, and still a record-setting performance for the Gators.

The next stop for the Gators will be the NCAA Championships from March 23-26 in Atlanta, Georgia. There, they return all but 12 individual points for a team that placed 3rd overall.

With Chaney hitting his full stride as a third star alongside Finke and Smith, and the Gators having no obvious relay weaknesses, another top three finish is theirs for the taking.

Anybody who thinks they’re going to catch the Gators anytime soon is going to have to find something special. The only senior on this list is the man at the top, Kieran Smith.

Can’t wait for Texas to shake that up.

Great write up! They definitely had guys step up in the absence of Finke and Hillis. On a side note, I believe this is Nesty’s 4th year and 4th SEC championship as head coach

Correct. Nesty took over as head coach beginning with the 2018-19 season.

Like to see them do a last chance qualifier this year.