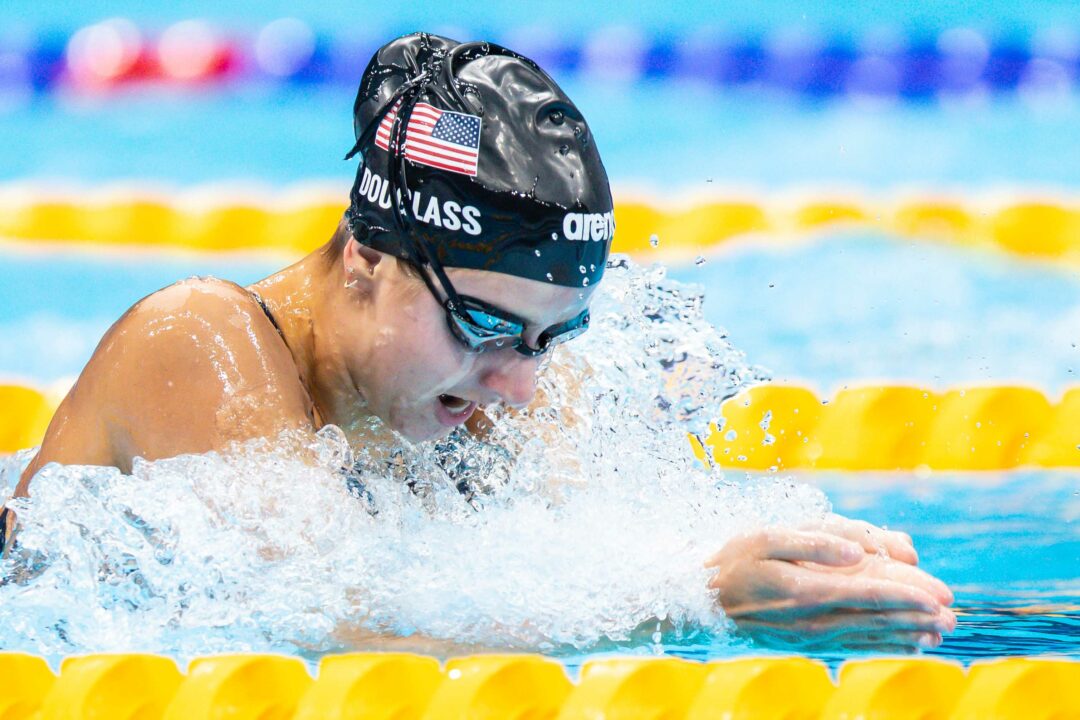 Watch highlights from the first two days of the Cavalier Invite, including Kate Douglass' 2:03.14 200 breast, the third-fastest performance ever. Current photo via Jack Spitser/Spitser Photography

The University of Virginia kicked off their annual Cavalier Invite today in Charlottesville. This meet typically serves as a combination of taper meet for swimmers who don’t make their conference team, and a tune-up for those who are, but are looking for some fast times before championships, and today proved to be no exception.

UVA Swimming has posted videos of most of the heats on their YouTube channel, and we’ve include a few of the highlights from the first day of the meets below, including Kate Douglass‘ 2:03.14 200 breast time trial.

UVA’s Kate Douglass torched the Aquatic and Fitness Center pool during a 200 breast time trial after the prelims session of the Cavalier Invite Saturday morning. The junior swam to a 2:03.14 that moves her up to #2 all-time on the 200 yard breast top perfomers list. That’s also the third-fastest swim in history.

UVA freshman Matthew Styczen improved his 400 IM lifetime best by nearly five seconds on Saturday, winning  finals with a time of 3:44.96. That time moves him to #3 in the ACC this season, would have easily made the A-final at last year’s ACC championships (it took a 3:46.84), and is less than a second away from what it took to score at last year’s NCAA Championships

Just such an amazing talent! She is such a joy to watch swim!

Incredibly inspired by G. Walsh, A. Walsh, K. Douglass and P. Madden, but when you call it the “Cavalier Invitational” at least have the decency to keep the camera on the finish until everyone finishes. You can cut to the scoreboard for the times after they’ve all finished. A team is more than 4 swimmers.

They literally cut to the scoreboard on all these videos after all the UVA swimmers were done swimming. What do you want?

She looked long into the wall on at least three of the turns.

On the other hand, I can see why she has traditionally been better at the 200 breast than the 100. She carries her speed extremely well, with a very strong kick and an excellent body line. I don’t think she would gain as much as many sprint breastrokers from a faster turnover. This means she has to really weigh the loss of speed of breaking her streamline to take that sixth stroke into the wall for a faster turn. I bet that as she tapers she will get that extra foot off of each kick and her tuning will be better though.

True, although she’s got some fantastic pulldowns, which help mitigate that long glide into the turn.

Rude. I was just trying to call attention to the typo so they could fix it. Chill.

Not impressive enough for my cheers!

If there were more than 10 people there then there would have been a better reaction.

Is it just me, or are her turns really slow?
I mean, I have never coached a swimmer anywhere near that speed, so I may not be the most entitled to my opinion, just seems like she takes a long time to get around. Everything else looked great.

Was gonna say this. The trend for elite breast/fly swimmers is keeping the head forward and not swinging it like she does rotating and planting feet looking down/to the side.

Why are you counting strokes nerd