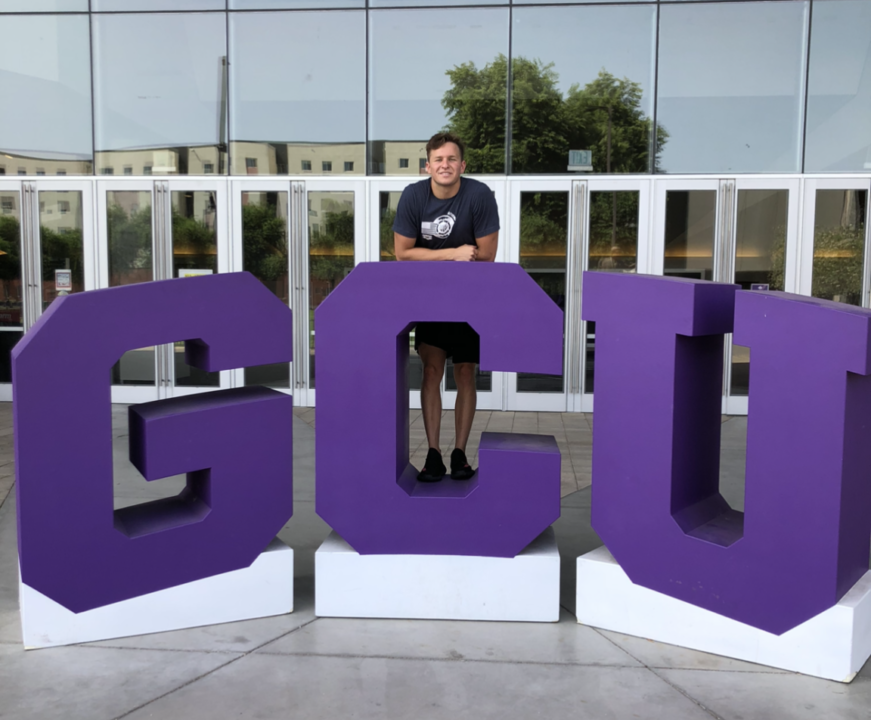 WAC foes UNLV and Grand Canyon University went head to head on Saturday in a final tune up before the conference meet at the end of the month. The UNLV women emerged victorious and capped an undefeated regular season, while the GCU men outlasted the Rebels for a three point win.

Grand Canyon was led to a narrow victory by sprinter Jack Armstrong, who won all three of his individual events. The Manvel, Texas native who transferred to GCU from Auburn, starred in the sprint events on Saturday, winning the 50 free, 100 free and 100 fly. Armstrong’s first win came in the 50, where he posted a 20.02 to take the win. He completed the sprint free sweep with a dominant second and a half win in the 100 free, touching in 43.93. He closed out his day with a win in the 100 fly as well, stopping the clock in 48.55. Armstrong also led off GCU’s 200 free relay in a 19.90, though the relay was ultimately disqualified.

The GCU diving program also made a significant impact, with sophomore teammates Isaac Poole and Nicholas Gunn finishing 1-2 in both the 1 and 3 meter events. Poole, a native of Shoreline, Washington swept both of the boards, finishing with a score of 320.03 in the 1 meter and 320.93 in the 3 meter. Gunn also played a key role, taking narrow second place finishes in both boards to help the Antelope’s secure the win.

Leading the way for UNLV was junior distance swimmer Cameron Castro, who won both the 1650 and 500 free on Saturday. Castro swam a tight race with GCU junior Miklahil Lyubaviskiy in the 1605, with the two swimming within 2 seconds of one another through the first 1300 of the race, though Castro pulled away down the stretch to touch first in 15:42.18. Castro then later returned to win the 500 free as well in 4:39.91, to win by 2 and a half seconds. The Long Beach, California native’s season bests sit at 15:04.59 and 4:24.19, both from the Tennessee Invite.

Also winning two events for the Rebels was freshman Adnan Beji, who swept the breaststroke races. In the 100, the Tunisian national posted a 55.23 to win by nearly a second over GCU’s Amir Haviv. The two battled again in the 200 breast, with Beji coming out on top again, 2:03.22 to Haviv’s 2:04.14.

The UNLV women were dominant in their win over the antelopes, and finished the regular season a perfect 7-0 and extended their dual meet winning streak to 15 straight, dating back to the 2019-2020 season.

Leading the way for the Rebels was senior Carissa Armijo, who won both of her individual events on the day. The Houston, Texas native started her meet by leading a 1-2-3 UNLV sweep in the 200 free, touching first in 1:52.71 ahead of teammates Teneka Ash and Malia Fernandez. She later returned to win the 500 free as well, touching first in 5:04.92 for the win. Armijo’s season bests came at December’s UNLV Invite, where she swam a 1:51.24 in the 200 free and 4:56.51 in the 500 free.

Also impressing for UNLV was sophomore Blanka Bokros, who put up a dominant 6 second win in the 200 fly. The Budapest, Hungary native used a consistently split race to finish in 2:01.49, well ahead of GCU freshman Aleksandra Wegrzynowska. Bokros’ season best sits at 1:59.69 at UNLV’s meet against Wyoming and Hawaii.

The UNLV women will return to action at the Mountain West Championships on February 16th in College Station Texas, while the UNLV men and both GCU squads will compete at the WAC Championships a week later.