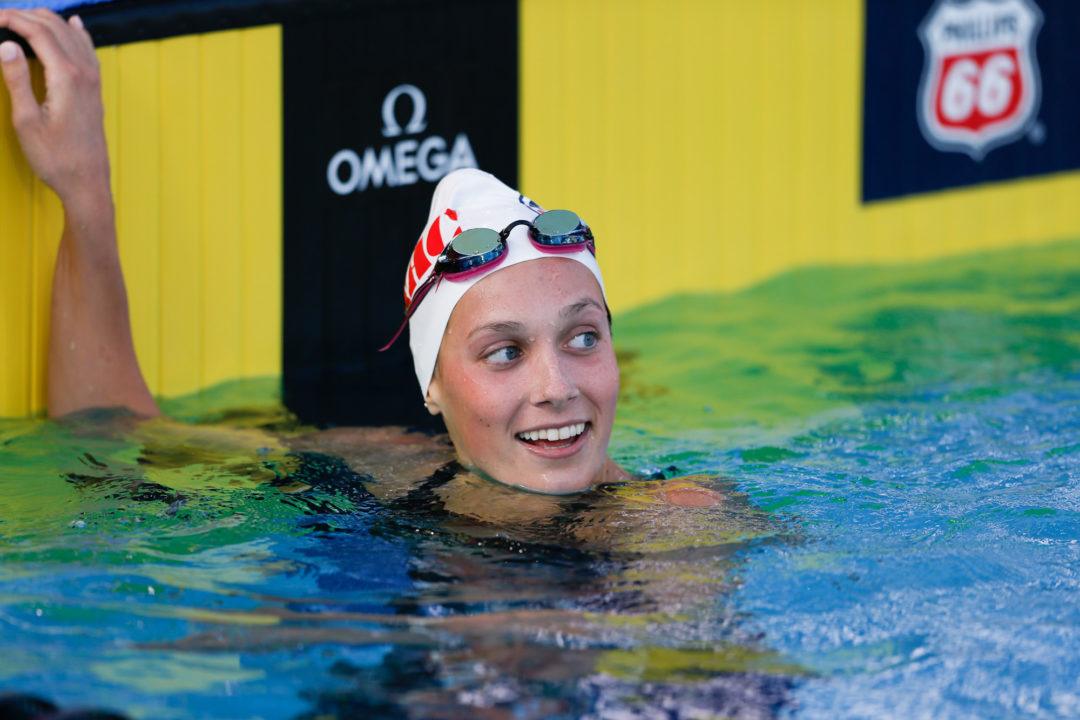 The 2020 TISCA Championships concluded Saturday night. Harpeth Hall sisters Alex Walsh and Gretchen Walsh continued to impress. On day 1, both sisters swam medley relay splits that would have been the 3rd fastest in last year’s NCAA final. Alex Walsh was just a nail off her own State Record, while Gretchen Walsh took down Abbey Weitzeil’s National High School Record in the 50 free.

Tonight, Gretchen Walsh started things off with a new National High School Record in the 100 free. Her 46.98 took down Weitzeil’s former record from 2015. She’s now the 3rd fastest 17-18 year old girl ever behind only Olympic gold medalists Simone Manuel and Weitzeil.

Alex Walsh, who was just off her own State Record in the 200 free last night, picked up her 2nd individual title of the meet in the 100 back. Her 51.35 was about half a second shy of her lifetime best from 2018. It was just 3 hundredths shy of the National High School Record before tonight, but around the same time tonight Phoebe Bacon broke that record at DC Metros with a 50.89. Interestingly, it was a new State Record, breaking the former mark held by her younger sister. Gretchen’s old record was a 51.57 from last season’s TISCA.

In addition to his individual swims this weekend, Jackson split a 19.90 on the anchor leg of the winning 200 free relay and led off the winning 400 free relay in 44.80. McCallie was slightly behind in the team battle, but with that relay victory, they ended the meet in a tie. McCallie and Baylor are both the 2020 Tennessee State Champions. Baylor won both team titles, as the girls defeated Harpeth Hall. Montgomery Bell’s 3rd place finish for the boys was their highest finish since 2014.

YOUR MONTGOMERY BELL ACADEMY SEADOGS ARE 3rd IN THE STATE WITH THE HIGHEST FINISH SINCE 2014 #webackbabybackbabyback pic.twitter.com/7R9YpDWsao

super proud of Baylor’s dedication this past season as many teams don’t have the depth and range that they do. The girls side graduated some of the top swimmers in the country and still was able to come out on top. It’s not a one person sport but a whole team effort and Baylor showed HH how to get it done.

Personally, I wish that Ophilia Pilkinton was still in high school so that the 400 Free record could have been absolutely obliterated. I’m not hating on Lexi. She still has a ton of time to train, but it seems like she was carried on the relay. Just an opinion. Congratulations on all four of them!

C’mon now… why not get on Gretchen for going a 48 with a flying start after she just went 46 an hour earlier? Why do you have to pick on the lead off leg?

Where Is the love for the consolation finals #BfinalsIsStillFinals

I’m giving McCallie the tie breaker. They won all 3 relays and had 3 individual champions. Baylor had 0.

Sorta wanted to see what Alex Walsh would have gone in the 200 IM.