5 Storylines To Watch At the 2018 U.S. Winter Nationals 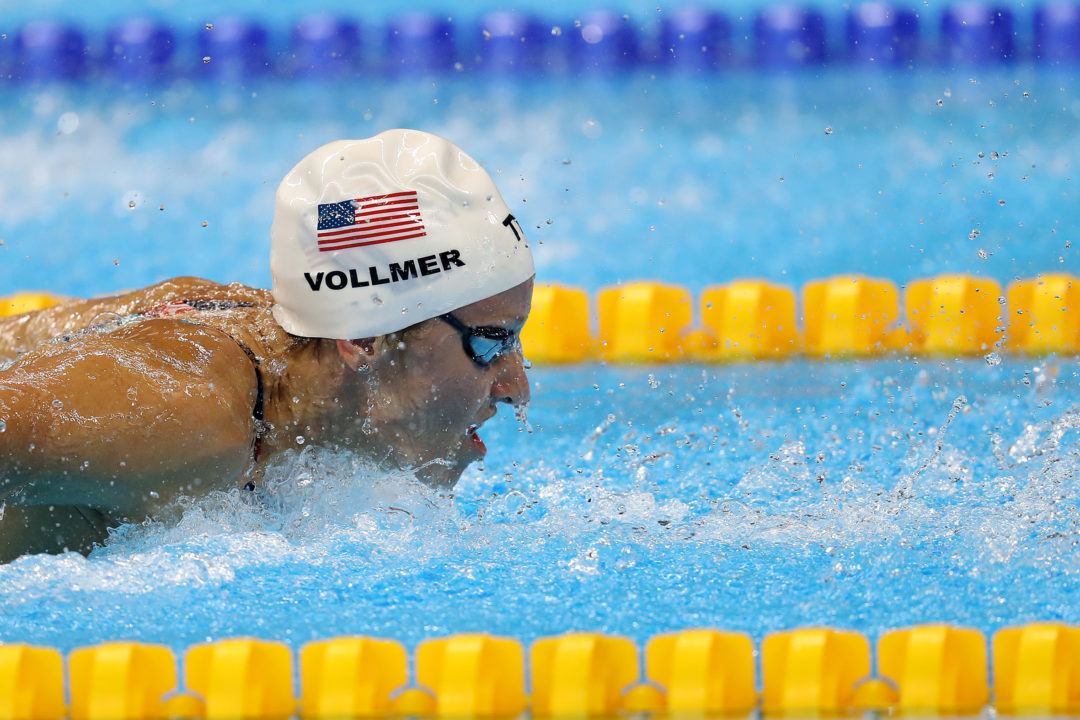 It’s rare that Katie Ledecky enters the pool without a record of some sort on high alert. Now a pro, Ledecky hasn’t competed yet this season, so it’s a little aggressive to expect world record performances in a season debut. On the other hand, Ledecky has historically been great around this time of year. As a freshman in college, she set American records in the 500-, 1000- and 1650-yard freestyle in November. As a sophomore last season, she lowered the American 1650 free record at the Art Adamson Invite.

Swimming in long course sets the world record bars a bit higher. But Ledecky – entered in the 100, 200, 400 and 800 frees – never seems to need much rest to make history.

2. Dana Vollmer Back in Action

Three-time U.S. Olympian Dana Vollmer makes her return to racing after a break of essentially two years. Vollmer has competed very sparingly since winning three medals at the 2016 Rio Olympics. She raced just once in 2017 and once in 2018, swimming only two 50 frees and a single 50 fly. In between, she gave birth to her second child, born in July of 2017.

But the American record-holding flyer has made clear she plans to return to competition and has her sights set on Tokyo in 2020. She’ll swim the 100 fly and 100 free in Greensboro this week, hoping to qualify for those 2020 Trials at the first opportunity.

The men’s breaststrokes have been one of the toughest event disciplines to predict among American athletes over the past few years. This past summer saw a rise of new faces, with Michael Andrew and Andrew Wilson making the top U.S. travel team while established Olympians missed the cut.

Three established veteran stars are on the psych sheet for this week. Cody Miller, Kevin Cordes and Nic Fink are all international medalists for the United States, Miller and Cordes at the Olympics and Worlds and Fink at Pan Pacs. But all three missed the 2019 U.S. Worlds team and are currently expected to be named to the Pan American Games roster. All three are inside the top 4 seeds in both the 100 and 200 breaststrokes this week, with a chance to prove they can continue to compete with the rising youngsters for the top breaststroking spots domestically. Cordes is coming off a change of training base, following coach Sergio Lopez to Virginia Tech. Miller, meanwhile, has suggested on his vlogs that he won’t race at Winter Nationals, though he still appears on psych sheets.

With Winter Nationals taking place in long course meters this year, far less college programs are using the meet as a mid-season rest opportunity. But there are still a handful of NCAA standouts who are entered in this meet, potentially looking to add some solid long course swims to their short course mid-season invite times from two weeks ago.

NC State is the highest-profile program sending a number of its top athletes. NCAA 100 back champ Coleman Stewart will compete in the 100 fly, 100 back and 100 free. Teammates Nyls Korstanje and Giovanni Izzo are entered in the sprints, and their results could have huge relay implications for NC State down the road. On the women’s side, Ky-Lee Perry and Sirena Rowe head the sprints and Sophie Hansson will compete in breaststroke. Top swimmers from other programs include Arkansas standout Anna Hopkin (among the favorites for the NCAA 50 free title this season), versatile Florida freshman Mabel Zavaros and incoming USC freshman Erica Sullivan, who is expected to be one of the nation’s top distance swimmers when she joins the Trojans in January.

Though most of the top age group swimmers usually choose to attend Winter Juniors a week later, a handful of the top junior talents will swim with the big dogs this week. And several could be in the hunt for National Age Group records.

It’s a great testament to the collegiate system and it’s ability to develop talent that the best American 17-18 100 freestyle ever is “only” 48.78 but the US continues to field world class 100 freestylers at senior professional level.

I see what you’re getting at and I don’t disagree, but I think that that specific example has a bit more nuance. Dressel set that when he was 17 and then didn’t swim much his senior year, so it’s fairly likely that the NAG would be quicker if he’d swum the whole year*.

*I’m glad he didn’t, though. He might never have gotten so fast if he hadn’t taken some time off to recharge.

I would be glad to see Katie Ledecky at this meet faster than Rebecca Adlington’s 8:14.10 and Pellegrini’s 3:59.15. But the most interest is how good Katie is in sprint now. She was strongly pushed this season by younger swimmers in 200 and 400. I don’t know if it is of any importance to her but I would like to see her being #1 in 200 third season in a row. W200FR can be of some interest by itself. Not because of strong competition but because there will be swimmers who are tend to improve their personal/season best. Manuel was very close to break finally 1:57 barrier this season and it will be nice to see another 1:56 American swimmer.… Read more »