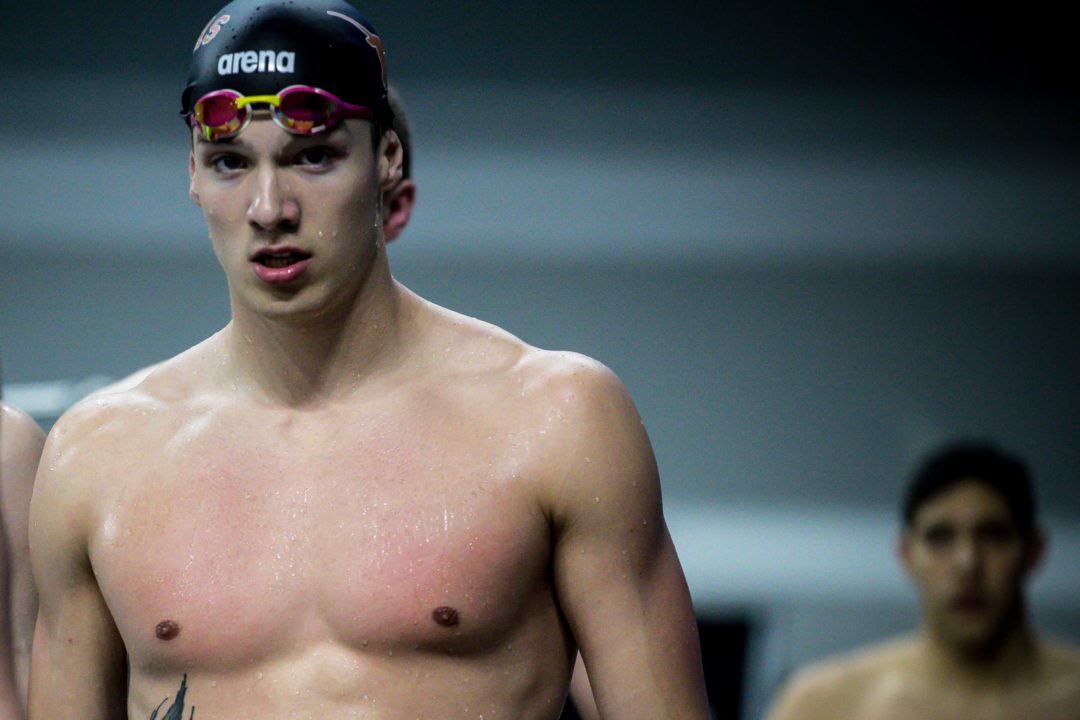 Although Kieran Smith is the only man in the field who has been sub-1:30, there is a chance that swimmers like Texas's Drew Kibler (pictured) could join him. Archive photo via Jack Spitser/Spitser Photography

The 200 free at the 2022 Men’s NCAA Swimming And Diving Championships will be one of the most stacked races. Although the NCAA, US Open, and American Record holder Dean Farris will not be competing in this event, there is still a very strong field of swimmers that will make this event very fast.

Because of how competitive this race is, we wonder: How many people will be under the 1:30 mark?

For starters, there’s the defending NCAA champion, Florida’s Kieran Smith. Out of everyone in the field, he is the only man who has been sub-1:30 before. His best time of 1:29.48 is the second-fastest ever behind Farris’s 1:29.15, so if there’s anyone who can take down the record, it’s him. Smith did not swim this event individually at SEC championships this year, but he led off Florida’s 800 free relay with a time of 1:30.42, which puts him as the second seed on the psych sheets.

Although Smith is the only swimmer entered in this race that has been under that elusive 1:30 mark, there are many others who have been close, and could potentially reach it at NCAAs this year.

The fastest time so far this year was swum by Arizona State’s Grant House, coming in as the top seed with a time of 1:30.23 that he swum to win the Pac-12 title in this event. His win at conferences made him the fifth-fastest performer of all time, and considering how much time he’s dropped in a single year, he could be poised to go even faster.

ASU chose to redshirt all of their swimmers for the 2020-21 season, so it will be interesting to see how House handles the double taper of conferences and NCAAs considering that he has not swam at NCAAs since 2019.

Then there’s Georgia’s Matt Sates, who is this year’s SEC champion and is seeded third with a time of 1:31.16. Sates, who moved from South Africa to Georgia in January, was one of the most anticipated additions to the NCAA this year. He entered this season coming off of a red-hot FINA World Cup performance in the fall of 2021, where he broke short course meter World Junior Records in the 200 free, 400 free, and 200 IM. We then questioned if he could translate his success into yards, and he proved to us that he could when he took home two SEC titles in the 200 and 500 free. Although 1:31.16 is a far stretch from breaking 1:30, he has had an extra month of familiarizing himself in yards, so it’s almost like the sky is the limit for him in terms of getting faster.

Texas’s Drew Kibler comes in as the seventh seed with a time of 1:32.20. However, he has been as fast as 1:30.39 before, which makes him the eighth-fastest performer of all time. He swam that time last year at NCAAs to finish second behind Smith, and although he has not been near his best times at all this season, he will be a force to be reckoned with if he gets back to old form.

Although not everyone will be able to break 1:30, there are many swimmers who will could definitely place top three even if they don’t get under that mark.

Fourth-seeded Brooks Curry of LSU is definitely someone to look out for. Although he only finished sixth at NCAAs last year with a time of 1:33.12 (he was 1:32.55 in prelims), he has brought down his best time by over a second to 1:31.39 this year and finished second at SECs to Sates. Curry is primarily a sprinter that is better suited to events like the 50 and 100 free, but he is more of a contender in the 200 free this year than he was in years past.

Rounding out the list of sub-1:32 swimmers is Indiana freshman Rafael Miroslaw, who is seeded fifth. Miroslaw won the Big Ten title in the 200 free, but his best time of 1:31.89 actually came from leading off Indiana’s 800 free relay. He is from Germany, so like Sates, he also had to adjust to yards in a year of swimming and seems to be doing so very well.

Cal’s Trenton Julian is seeded all the way down in fifteenth with a time of 1:32.54, but has been as fast as 1:31.41 when he led Cal’s 800 free relay last year at NCAAs. In addition, he also was third in the individual event last year at the same meet. However, Julian has not been close to his personal bests this season, and only finished third at Pac-12s this year.

THE BEST OF THE REST

The person who came in second in front of Julian was Stanford’s Preston Forst. Forst finished tenth last year at NCAAs with a time of 1:32.80, but has gotten faster this year, dropping his best time to 1:32.48. However, that is only good enough to place him as the thirteenth seed, just showing how much faster the event has gotten this year.

A surprise in the top 8 is Air Force’s Wen Zhang. Zhang did not even qualify for NCAAs last year, holding a 2021 season-best time of 1:34.55, but after setting a WAC record at conferences this year with a 1:32.21, he made the jump to be seeded eighth in his first-ever NCAA championship meet.

Luke Miller is seeded twelfth with a 1:32.46, which is the time he swam to win the ACC title in the event this year. This marks a huge improvement from the 1:33.31 that he swam at NCAAs last year to finish 15th. Miller also split a very promising 1:31.03 on NC State’s 800 free relay at ACCs, which indicates that he could go a lot faster on his flat start as well.

Just outside the top eight is Georgia’s Jake Magahey. Magahey is stronger in longer distance events like the 500 and 1650 free, but is seeded ninth with a time of 1:32.24, which he swam to finish fourth at SECs this year.

Texas’s Peter Larson and USC’s Alexei Sancov are seeded 21st and 26th with times of 1:32.80 and 1:33.01 respectively. They were both A-finalists last year, but considering that neither of them broke 1:33, their times might not be able to make it back with increased competition this year. Again, another indication of how fast this event has gotten is that even though both Larson and Sancov are faster this year than they were at NCAAs last year, they are not even projected to finish top 16 when they were both top 8 last year.

Dark Horse, Gabriel Jett, Cal, Freshman- Jett turned heads at the Minnesota Invite last December when he dropped three seconds from his best time and went a 1:32.52, which is seeded fourteenth currently. He was very off at Pac-12s, adding time in his two best events, the 200 and 500 free. However, he did set a personal best in the 200 fly on the last day of the meet, signifying that his underwhelming performances earlier on were a fluke.

I would put Murilo Sartori as Dark Horse. He is only a bit slower than João De Lucca in LCM, but I think the difference is quite big in yards(1.33×1.31). I like to think he has 1.31 in the tank.

Will Sartori be the replacement freestyle leg on Louisville’s Medley relays and, if so, can he keep them in a challenge position for winning those events?

sates
smith
kibler
house
Julian
curry
freeman
miroslaw
Jett wins b final with a contending time for the a (not sub 1.30 by any means)

Sates is taking this one.

what happened to Dean Farris at trials? Did he get sick? He didn’t make the final.

Olympic trials? Why would he want to go the Olympics? He is Dean Farris

LCM is a different universe from SCY

Easy, it’s my job to over pump Texas. Get off my property

Hahaha! I pumped up Cal a wee bit too

2
0
Reply
mens ncaa> every other sport
Reply to  Austinpoolboy

ur buggin theres more of a chance no one goes sub 1.30 again than this

this would be best case scenario which maybe if this was night 1 then maybe and I say that with a grain of salt.

and only finished third behind at Pac-12s this year.