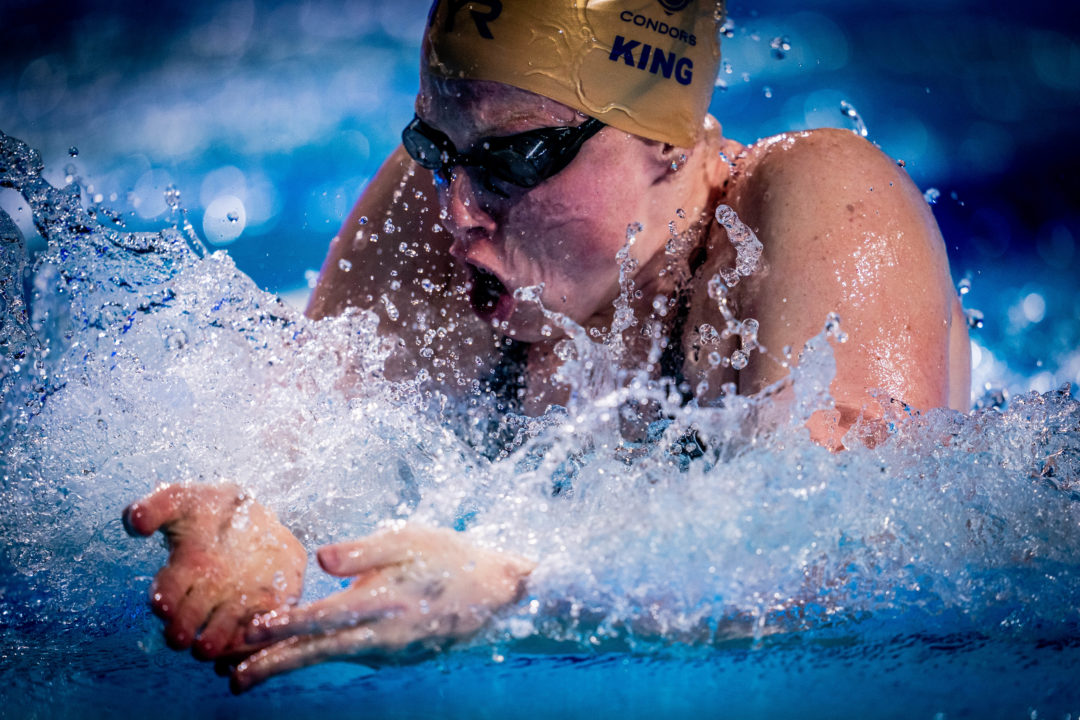 The Cali Condors, LA Current, New York Breakers, and Tokyo Frog Kings will face off, with the Condors beginning the campaign to defend their crown. Current photo via Mine Kasapoglu

Match 2 of the International Swimming League’s 3rd season begins Saturday at 12:00 pm EST and will feature 4 teams in their season 3 debuts. The Cali Condors, the LA Current, the New York Breakers, and the Tokyo Frog Kings will face off in Naples, with the Condors beginning the campaign to defend their season 2 crown.

This preview assumes the New York Breakers are released from their quarantine and allowed to compete Saturday. At present, due to one member of the NY Breakers testing positive for COVID-19, the entire team is remaining in isolation.

Though the Condors boast a strong roster, heavyweights Caeleb Dressel, Olivia Smoliga, and Nic Fink are expected to miss part of the season. Natalie Hinds and Emily Escobedo are also expected to miss part of the regular season, though the niches they fill on the Condors can be pretty well covered by others on the team. Precisely how this will affect the Condors remains to be seen, but they can most likely afford for Dressel, Smoliga, and Fink to miss a few matches and still get their team into the playoffs.

Without Dressel, LA Current’s Tom Shields should be the top male butterflyer in match 2, with the potential to win the 50, 100, and 200 fly races. Shields is also a great freestyler and could be plugged in on a 4 x 100 free relay, if needed. The Current are without Ryan Murphy in Naples, but they do have Kathleen Baker and Maddie Wilson on the women’s side.

Neither David Popovici nor James Wilby will not be present in Naples this weekend for the New York Breakers, though the Breakers still have Marco Koch to use in breaststroke.

The LA Current is strong in butterfly on both the men’s and women’s side. For the men, Tom Shields, Angel Martinez, and Maxime Rooney, while on the women’s side they have Beryl Gastaldello, Anna Ntountounaki, and Katie McLaughlin.

Even without Dressel and Wang, the Condors have Marcin Cieslak and Mark Szaranek, though Coleman Stewart could be called upon for a 50 or 100 fly if needed. Kelsi Dahlia, Erika Brown, and Kathrin Demler make a strong women’s fly crew for the Condors.

The Tokyo Frog Kings have a strong butterfly roster with Suzuka Hasegawa, Ali Tetzloff, Leah Gingrich, and Keanna MacInnes make for a very solid crew on the women’s side. Tokyo isn’t as deep in the butterfly on the men’s side, but Tomuro Honda could challenge Tom Shields in the 200 fly.

Matthew Temple, Joe Litchfield, and Phillip Heintz represent the Breaker’s best bet for points in the men’s butterfly, while Svetlana Chimrova and Arina Surkova are the Breaker’s top female flyers.

With no Ryan Murphy, the men’s backstroke is relatively open this weekend. Cali Condors’ Coleman Stewart proved last season that he is a very competitive ISL racer and could step up to win all three backstroke races. Justin Ress, also on the Condors, could also place high in the 50 and 100 backstrokes. Tokyo’s Grigory Tarasevich will also be competitive across all three backstroke distances and could step up in the void left by Murphy.

The Condors may not have Smoliga this weekend, but Beata Nelson is capable of winning all 3 backstroke events, though she is strongest in the 200. Sherridon Dressel could also bring in some points for the ‘Dors in the backstrokes. For the Current, Kathleen Baker and Maddie Wilson will be huge assets in women’s backstroke.

Daryna Zevina and Alicia Tchórz, and Daria Ustinova make for a strong female backstroke contingent for the New York Breakers, while Elliot Clogg and Joe Litchfield represent New York’s best bet for backstroke points. Tokyo is relatively weak in backstroke on the women’s side, having invested heavily in pretty much everything except backstroke.

The New York Breakers catch a break in the breaststroke thanks to Marco Koch on the men’s side, and Molly Renshaw, Sarah Vasey, and Tes Schouten on the women’s side. Not having James Wilby or Michael Andrew hurts though.

LA Current gets a boost here from Will Licon and Christopher Rothbauer on the men’s side, and Julia Sebastian and Helena Gasson on the women’s side.

Miranda Tucker and Kanako Watanabe will have to carry Tokyo in the women’s breaststroke, while Yasuhiro Koseki and Federico Poggio will need to get it done for the men.

The Condors return Lilly King and Molly Hannis in the breaststroke, and it’s hard to bet against either of them. The Condor men could come up a little short in breaststroke without Nic Fink though.

With no Dressel, the Condors will have to rely on Justin Ress in the sprint freestyle–and could potentially pull Coleman Stewart into the 100 if needed–though with Townley Haas capable of covering the 100, 200, and 400, Stewart can probably stick to backstroke and/or fly.  Tom Peribonio could be another key player for the ‘Dors in the 400 freestyle, as are Khader Baqlah and Kacper Majchrzak. The Condors will rely on Kelsi Dahlia and Erika Brown for their sprint freestyle efforts, though if they’re too busy with butterfly, the plug in Katarine Savard. As long as Smoliga and Hinds are absent, sprint freestyle could be a big gaps for the ‘Dors on the women’s side.

Tokyo picked up former-Condor Bowe Becker, who will play a key role in their sprint freestyle efforts, alongside Vladislav Grinev and Vladimir Morozov. Tokyo’s women will have Ali Tetzloff, Julie Meynen, Catie DeLoof, Paige Madden, and Leah Smith to cover the entire gamut of freestyle races.

The LA Current returns strong in sprint free with Maxime Rooney and Ryan Held on the men’s side, and Beryl Gastaldello and Abbey Weitzeil on the women’s side. Katie McLaughlin is a solid middle-distance freestyler for the Current, as are Fernando Scheffer and Breno Correia. Freestyle could end up being the strongest part of LA’s roster this season.

The Breakers could have a tough time in freestyle, and the absence of both Michael Andrew and David Popovici will be felt. The fastest female sprint freestyler the Breakers have is Arina Surkova, though with a watered-down field across the board (save for Tokyo), she could earn some much-needed points for the Breakers in the sprint frees.

Brendon Smith and Abbie Wood boost the New York Breakers tremendously in the IMs, as does Phillip Heintz.  The IM is definitely the best part of the Breaker’s roster.

Tokyo has another gap in its roster with the IM. While they could be fine with Daiya Seto and Leah Smith, neither had a particularly good summer.

The Condors are still pretty loaded in the IMs, even without Dressel to do the 100, thanks to Marcin Cieslak and Beata Nelson. It will hurt not having Hali Flickinger though. Mark Szaranek and Tom Peribonio could come through on the men’s side in either the 200 or 400 IM.

LA will heavily rely on Abrahm DeVine and Anastasia Gorbenko for its IM efforts, though Gastaldello is the league record holder in the 100 IM and will surely play a key role in that event.

If the ISL did 4 x 50m relays, Tokyo might have the best men’s 4 x 50m freestyle relay in the league. Stretched out over 400 meters total and the Frog Kings are still strong, but probably not quite strong enough to get past the Condors. Same goes for the women–Tokyo has a flurry of ultra-fast 50 freestylers, but Cali takes the edge once the distance doubles.

The LA Current could take the women’s 4 x 100 freestyle relay–maybe the medley also, though less likely. LA’s men could also take either relay crown, though without Murphy their medley relay may struggle against the Condors. Tokyo can probably field a decent men’s medley relay, though their women’s team could struggle if they don’t have a backstroker step up.

The Condors are the team to beat in the men’s medley relay, even without Dressel; the same could be said for the women, who lack will Smoliga on the backstroke, but Beata Nelson is a pretty solid backup. In both freestyle and medley relays, the Condors and Current will have a dogfight to determine the winner.

New York is probably out of it completely in either men’s relay, though their women’s medley could be competitive.

It will be a hard-fought battle, and even without Dressel, Smoliga, and others, the Condors have a robust enough roster to get the job done. LA Current will keep it close the entire way though, and it wouldn’t be terribly surprising to see them get the match 2 win. Tokyo is the an easy enough pick for 3rd and could put together some dangerous relays, though we don’t see them having the firepower to take down either California-based team. The New York Breakers are clearly the weakest link here. Several key losses leave the Breakers as major underdogs for the entire season.

Neither, not, and nor in the same sentence…the rarest of sights to behold

Give the trophy to the condors already

She quietly had a really good Olympics. Overshadowed by how well the Australian women did as a whole but she looked good

Is Dressel going to be there, looking at their social media I think he’s at Naples

yep he’s at Naples, can’t see them not swimming him

He is on the start list on omega timing