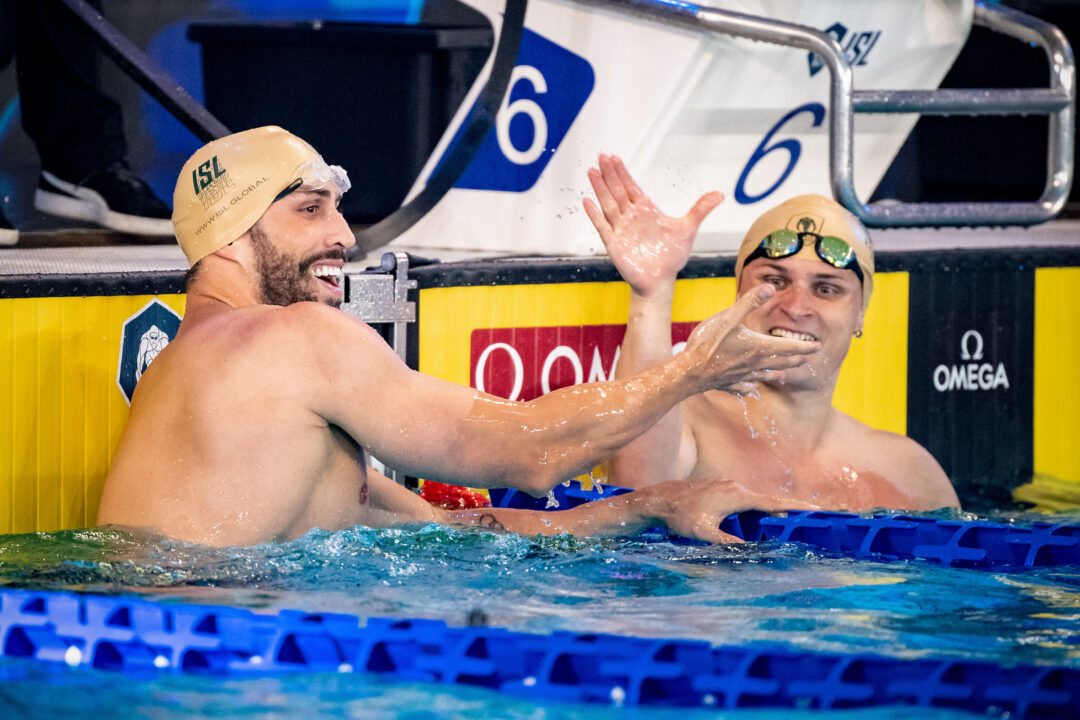 Almost everything went right for London on day two, aiding their match win. Contrastingly, a bunch went haywire for Cali, including no Dressel and a DQ. Current photo via Giorgio Scala / Deepbluemedia / Insidefoto

Day two of match six in Naples was shaping up to be a wire-to-wire duel between the London Roar and Cali Condors, on paper. However, as the match progressed, the Roar carried momentum off of their point moves while the Condors faced many mid-meet shortcomings that ultimately made London’s lead un-breakable. In the race for third place, the Aqua Centurions picked at the Tokyo Frog Kings’ lead all the way to the last event.

A number of events went right for London, including the backstroke events. The same exact backstroke event winners from match three in fact repeated their victories in match six. On day one, Minna Atherton and Luke Greenbank took the women’s and men’s 200 back events while Kira Toussaint and Guilherme Guido won the women’s and men’s 50 back events. Today, Toussaint and Atherton went 1-2 in the women’s 100 back. In the men’s race, Condor Coleman Stewart touched the wall first, but got disqualified due to an underwater 15-meter violation, giving London’s Guido the 19-point win by technicality. This now makes the Roar 12-for-12 in the backstroke events thus far with two matches under their belt.

Along with the backstrokes, the Roar walked away with 6 more event wins, totaling 8 day two wins. Emma McKeon and Duncan Scott started the session with back-to-back wins in the 100 free events. Scott went on to win both the 100 IM and 200 free, picking up 19 points combined from those events. Then, lone male free anchor Kyle Chalmers led London to a 1-2 finish in the mixed medley relays, picking up 32 total points.

While McKeon got knocked out in the semi-final round of the women’s 50 fly skins, Katsumi Nakamura pushed on through all three rounds of the men’s 50 free skins to pick up 36 total points. Even with two-time Olympic 100 free medalist Chalmers on London’s roster, they were able to flex their deep roster to aid their match six win.

The Cali Condors’ second day went more differently than expected with Caeleb Dressel pulling out last-minute of day two competition. During match four, Dressel scored a total of 97 individual points on day two alone: 12 points in the 100 free, 19 points in the 100 IM, 15 points in the 50 fly, and swept the 50 free skins with 51 points.

The Condors were able to find last-minute substitutions, but it would be difficult to replicate all those Dressel points. In the 100 free, Justin Ress and Kacper Majchrzak finished 3-8, worth 7 points. Nic Fink and Marcin Cieslak finished 4-5 in the 100 IM to combine for 9 points. Cieslak wound up getting jack-potted in the 50 fly, only Oleg Kostin picked up 4 points with his 5th-place finish.

From those three events, Cali only earned 20 points to Dressel’s 46-point pick-up from those same events in match four. Cali then saw one of their biggest blunders in the men’s 50 free skins, where both Ress and Coleman Stewart were knocked out of the top four in the first round. During match one, where the men’s skins event was the 50 back, Stewart and Ress finished 1-2.

Dressel’s absence would not be the only issue that negatively affected the Condors’ day two performance. As aforementioned, Condor Stewart touched the wall before London’s Guido in the men’s 100 back, but later Stewart would be disqualified, a 2-point deduction. At the same time, Angel Martinez no-showed following Ress’ last-minute scratch, a 4-point deduction. Martinez had just swum the 200 fly prior to the 100 back, likely pointing to his no-show. Stewart’s disqualification and Martinez’ no-show gave the Condors a 6-point loss to London’s 24-point gain in that event alone.

On a different note, the Aqua Centurions were able to persevere all the way to the last event to topple the Tokyo Frog Kings for third place. Tokyo ran third for the entirety of the match up until the semi-final round of the men’s 50 free skins, where both Aqua men shut out Tokyo’s remaining swimmer.

Daiya Seto made big moves on day two for Tokyo, including winning the 200 fly with 15 points and picking up 21 total points in the 400 IM. Seto wound up on top of the match six MVP standings with four individual swims. On day one, Seto scored 9 points in the 200 breast and 12 points in the 200 IM to total 57 points.

At the same time, Yasuhiro Koseki held off Aqua’s Nicolo Martinenghi and Arno Kamminga for the 10-point men’s 100 breast win while Yui Ohashi easily won the women’s 400 IM with 19 total points. However, Martinenghi and Kamminga’s 2-3 finish had built some momentum for the Centurions moving forward.

In the women’s 50 fly, Holly Barratt and Elena di Liddo pulled off a 1-2 finish, securing 17 points for Aqua. Then, Szebasztian Szabo touched out London’s Dylan Carter for the 12-point win in the men’s race. Behind Seto in the 400 IM were top-three finishers Ilya Borodin and Chase Kalisz, both scoring 20 points together to only give Tokyo a one-point advantage in the event.

Entering the women’s 50 fly skins event, Tokyo finished 7-8 in the first round while Aqua’s Holly Barratt advanced to the second round, earning 12 total points to Tokyo’s 2 points. Then, Szabo and Alessandro Miressi punched a 1-2 finish in the first round of the men’s 50 free skins to secure 16 points. Tokyo’s Pedro Spajari also advanced to the second round.

While London’s Nakamura won both remaining rounds, Miressi and Szabo placed 2-3 to deny Tokyo’s Spajari out of the third round, earning another 13 points as a duo. While Miressi got jack-potted in the final round, Aqua out-scored Tokyo in the last event 29-10, giving the Centurions the narrow three-point edge for third place.

Most exciting match so far.

It’s about time Coleman was DQ’d. He has consistently gone past 15m and not been called on it. Better that it happen to him now than in the final.