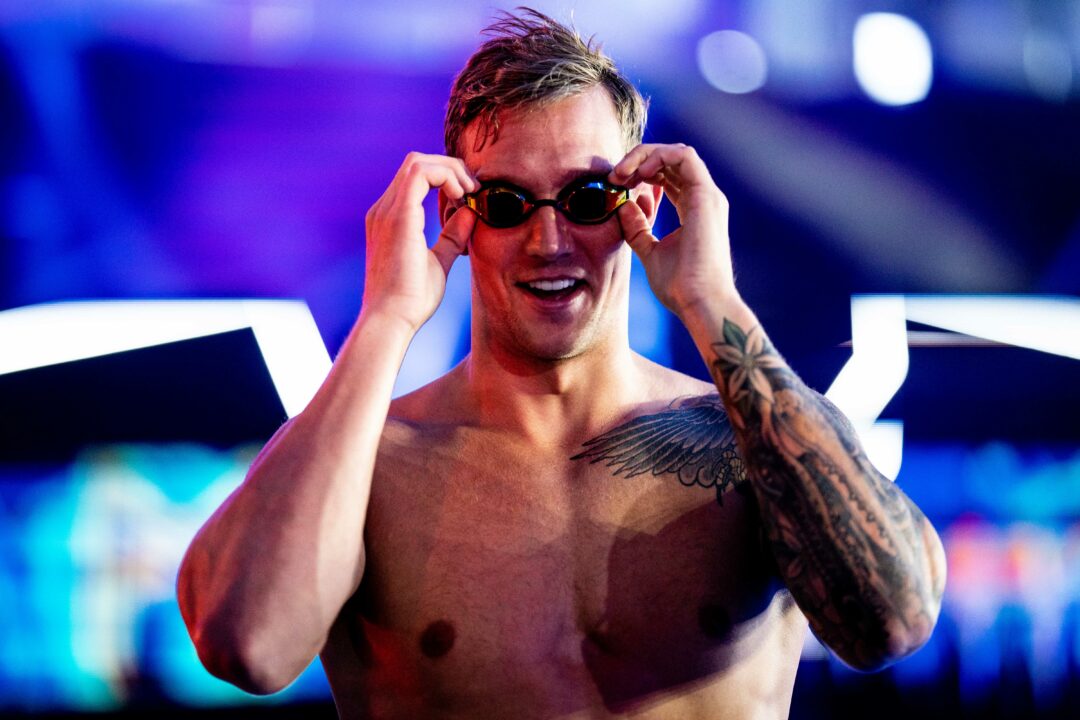 Caeleb Dressel has taken the day off from racing in Naples, telling Rowdy Gaines that he was not feeling well. Current photo via Mike Lewis/Ola Vista Photography

Caeleb Dressel has withdrawn from competition on Day 2 of Match 6. Rowdy Gaines mentioned on the broadcast that Dressel told him he was not feeling well and that he and the Cali Condors coaching staff decided it would be best for him to take the day off. There was no mention of COVID-related illness. SwimSwam reached out to Condors General Manager Jason Lezak for confirmation but have not yet heard back.

With five matches already completed, Dressel leads the league in overall MVP points, as well. He scored 93 points in Match 2 and 112.5 in Match 4, giving him a total of 205.5 points. The next highest point earner is Energy Standard’s Sarah Sjostrom with 138.

Dressel mentioned on the preseason podcast that he would swim as many meets as he felt up to, but that he hadn’t yet decided where he would draw that line.

Cali Condors were in second place on the season club points board with 8 points, one point behind LA Current. The Current, however, were a match ahead. So even if the Condors place second behind London Roar in Match 6, they will still jump to first place with 11 points.

Dressel has scored the lion’s share of his points in the skins races. His absence on Day 2 means that he will forgo those points, but from a team standpoint, Cali still has two strong entrants in the men’s 50 free skins with Justin Ress and Coleman Stewart.

Coming from a roar fan I really want to see both Condors and Roar at full strength I think it could be interesting obviously not having Dressel on day 2 hurt Condors but Roar still don’t have Peaty, Campbell, Dean and Prigoda and Chalmers was a relay only swimmer. I think it would be a great match to see both teams at full strength.

He heard that Chalmers came back and got ill

Not surprised. That 200 IM was downright sick.

hopefully this 200 I.M. doesn’t do to Caeleb’s Career what the 500 Free did to Townley at NCAA’s

They really missing him today 🥲🥲 it really is team Dressel 😂

That 200 IM took out his breath

Oh no. Like the Townley 500. The last we’ll hear of Dressel.

You mean people can get sick without Covid?? Hope he feels better soon!

He could be hungover

They will still mark it as covid.

He could have Remsivir like Trump & be up & about . Did better than equally fat unfit Boris & 20 years older. Caeleb should be up & about & competing in 1 day .