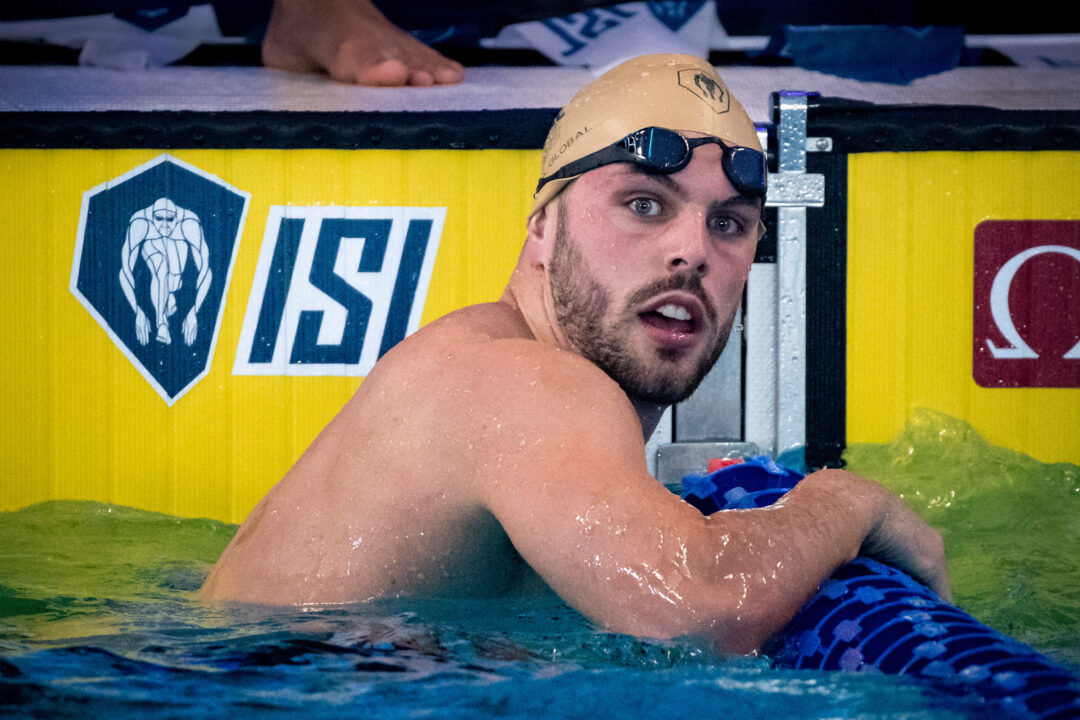 London’s Kyle Chalmers is only entered to swim freestyle in the mixed 4×100 medley relay while Cali front-runner Caeleb Dressel is not entered on day two of match six, where the Roar built a narrow 13.5-point lead over the Condors.

Entered in the 100 free today for the Roar will be 400 free champ Duncan Scott and teammate Katsumi Nakamura, who split 46.00 anchoring London’s “B” medley relay. Scott will take on the 200 free with teammate Zac Incerti, who placed seventh in the 400 free yet secured 6 checkpoint bonus points. At the same time, the versatile Scott is entered in both the 100 IM and 400 IM. That will be 800 meters of racing for Scott.

Filling in for Dressel in the 100 free will be Justin Ress and Kacper Majchrzak while breaststroker Nic Fink will take on the 100 IM alongside Marcin Cieslak. In the 50 fly, Cieslak will hit the water again alongside Angel Martinez.

Also out for the Condors is Molly Hannis. Yesterday, Hannis placed fifth in the 200 breast and third in the 50 breast. She also split a near-identical 100 breast leg as Lilly King in the medley relays, hitting 1:03.68 to King’s 1:03.67. Today, King will be joined by Leonie Kullman in the 100 breast and swim breaststroke in the mixed medley relay.

For the women’s 50 fly skins, London and Cali will go guns a-blazing with Roar members McKeon and Marie Wattel and Condors Beata Nelson and Kelsi Dahlia. Backstroker Nelson will also swim the 50 fly/100 IM double. In for the 100 back today alongside Smoliga will be Sherridon Dressel.

Known sprinter Erika Brown, who placed second in yesterday’s 50 free, will take on the 100/200 free double today for the Condors in lieu of the 50 free skins. During match four, Brown placed third in the 200 back.

Silver maybe, said himself on the podcast interview with SS

And it’s pretty likely that Kyle wins 100 free as well. They went into that swim with Kyle having swum a 200 the night before while Dressel didn’t

I think London are slowly bringing Chalmers back to ISL, he’ll probably do individual events next week.

Chalmers can at least do 100fr easily, if not also 2FR. He swam 2 relay free legs yesterday. Both excellent. He’s in great shape.

Kyle entered as relay-only for this week along with Mildred…

am already hurting for Duncan WHAAAAT EVEN

But why relay only? Emma is swimming individuals

Who knows? The girls really lacking? Kyle volunteering to let the other guys do indiv?

I doubled 200 fr 400IM every year of varsity swimming and the thought of adding two extra 100s in that session makes me ill.

What happened to Dressel??

The only think i can think of is Fatigue? After his 200IM yesterday he wasn’t really close to his best on the 2 relays.

24 hours is more than enough for him to recover

They said a couple minutes ago that he was just resting today to be great for the playoffs, hopefully everything is alright.