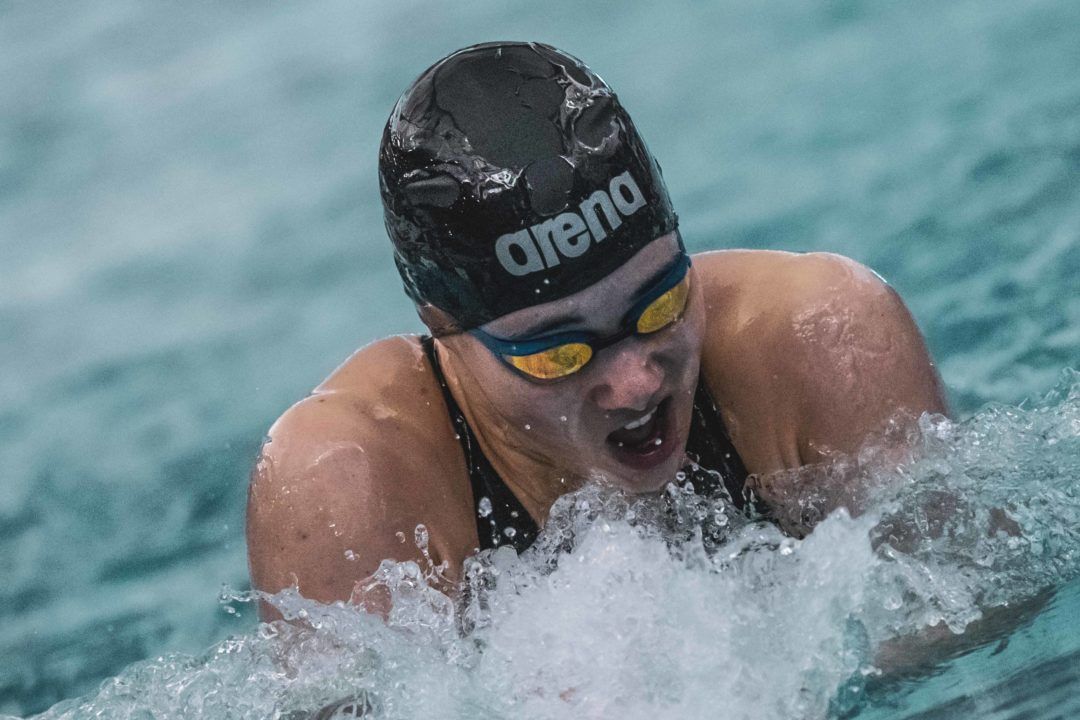 Wog swam the fastest 200 breaststroke prelim on day 4 of the Canadian Olympic Trials, hoping to join Sydney Pickrem in the event in Tokyo. Archive photo via Mike Lewis/Ola Vista Photography

Kelsey Wog has had 2 successful nights of racing behind her this week, having already qualified to race both the 100 breaststroke and 200 IM at the Tokyo 2020 Olympics.

During day 4 prelims, Wog asserted herself in the 200 breaststroke to claim top seed in the event with a 2:25.89 which is more than a second faster than second seed Avery Wiseman‘s 2:26.90.

The swim for Wog was just above the FINA A cut of 2:25.52 and was a few seconds slower than her current PB in the event of 2:22.42 which she swam last year at the 2020 USports National Championships.

Wog swam the 200 breaststroke for Canada at the 2019 World Championships in Gwangju and placed 6th overall in the event with a 2:25.14. Also in that heat at Worlds was Sydney Pickrem who wound up taking the bronze medal with a 2:22.90.

That swim was ultimately enough to earn Pickrem early selection for the 2020 Olympic team, allowing her to decide not to race the event at Trials. Pickrem instead swam the 200 IM on day 1, taking gold with a 2:09.24, and will race the 400 IM on day 5 as top seed. She has also been named to the Olympic team already in both of the IMs.

Pickrem’s pre-selection means that there is only 1 available spot on the team left so the top finisher in the final, should they hit the FINA A, will be the only one selected.

While Wog was the quickest woman during the heats, Avery Wiseman‘s 2:26.90 PB in the morning keeps her in the running. Also gunning for the top spot will be 2016 Olympian Kierra Smith who just missed qualifying in 100 breast earlier on in the meet. Smith swam a 2:29.84 for 3rd overall in the prelims which is well over her 2:22.23 PB from 2017.

Bailey Herbert and Nina Kucheran swam a 2:31.02 and 2:31.07, respectively for 4th and 5th place, and will need to deliver a significant drop during the final in order to get onto the team.

On the men’s side, the field was a little further off the FINA A standard in the 200 breaststroke during prelims. Eli Wall led the pack here with a 2:13.94 to get within 4 seconds of the 2:10.35 it will take to make the team.

Wall’s best time in the event is a little closer to the FINA A cut, sitting at a 2:11.47 which he swam during the prelims of the event at the 2018 Commonwealth Games.

100 breaststroke champion Gabe Mastromatteo was not quite on form during the 200 breaststroke prelims, hitting a 2:19.03 to trail his PB in the event of 2:14.30 which he swam at the 2019 World Junior Swimming Championships in Budapest.

That swim for Mastromatteo was the 8th fastest time in the prelims meaning he will need to move up a fair bit during the finals in order to secure a spot on the team.

Frederik Kamminga and Apollo Hess swam a 2:16.20 and 2:16.26 for 3rd and 4th in the heats while Justice Migneault, Graeme Aylward, and Jeremy Koueiki rounded out the top 8.

I don’t see Pickrem on this women’s list- pretty un-Canadian to scratch and not work together to give others a chance to practice racing after a year of limited competitions. Go Team Canada. Work hard- fight together!