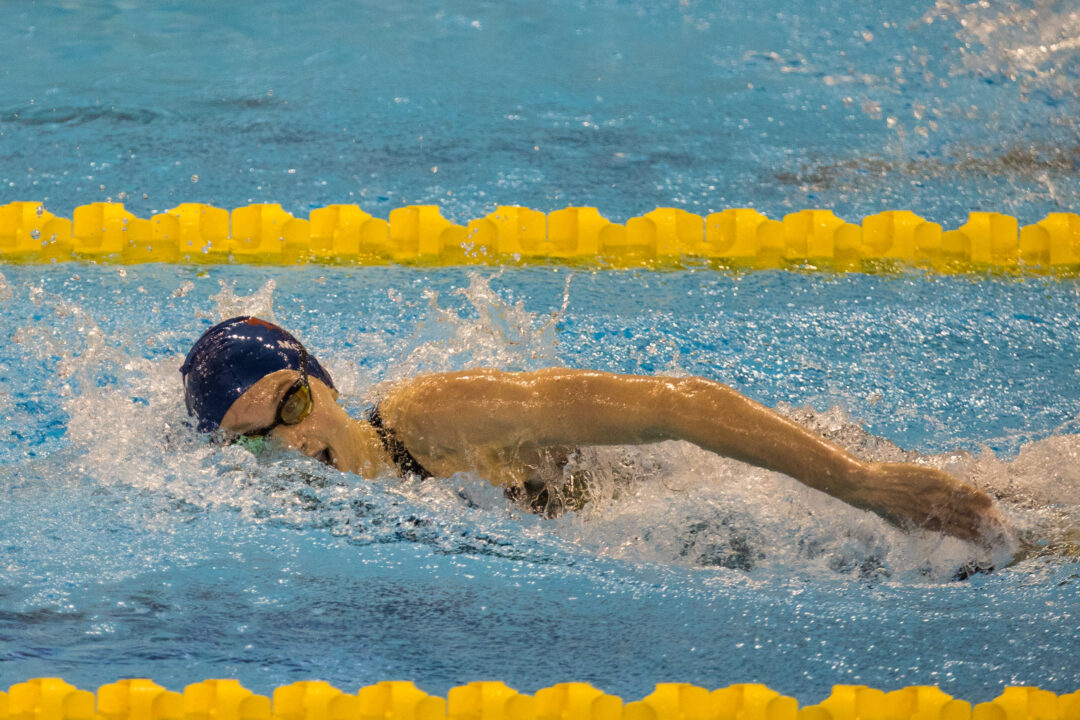 After winning the 200 and 800 freestyles earlier on in the meet, McIntosh won't race the 1500 freestyle final on night 5 of the meet. Current photo via Michael P. Hall

After swimming to Olympic-qualifying victory in the 200 and 800 freestyles over the first few days of racing at the 2021 Canadian Olympic Swimming Trials, Summer McIntosh has scratched out of the 1500 freestyle final.

McIntosh was entered as top seed in the event originally with a 16:15.19 which she swam a few weeks ago at a time trial in Toronto. McIntosh would have been one of 2 swimmers in the field with an entry time under the 16:32.04 FINA A cut as Emma O’Croinin is entered with a 16:30.46.

McIntosh scratched from the 1500 after delivering powerful victories in both the 200 free and 800 free which both qualified the 14-year-old for her first Olympic Games. In the 200 freestyle, McIntosh posted a 1:56.19 to become the fastest 15 & under swimmer in the history of the event and took out pre-selected Olympian Penny Oleksiak who hit a 1:57.24,

In addition to her 200 and 800 freestyle selections, McIntosh could potentially be selected to race the 400 freestyle at the Games considering that no one got under the 4:07.90 FINA A cut in the final and she recorded a 4:05.13 just last month.

Dunford put some work in with Sandpipers…certainly a candidate to do some damage.
Sandpipers quickly becoming very attractive .
Again, why isn’t Ron Aitken on the Olympic Coaching staff to Tokyo.

The harsh reality is because none of the girls are expected to medal. Michael Andrew’s coach was named to team (his dad) put 1 swimmer on team but Michael is very much a candidate for gold. It’s the quality not quantity mentality. Aitken is accompanying them to training camp in Hawaii.

Grimes could medal with another drop and Sims in 4 x 200 freestyle relay. Sullivan possibly in the mile also….

But Andrew’s could medal as of today without having to project drops and individually vs relay.

200 Fr same session as 1500 in Tokyo so makes sense to drop. To be frank never considered distance as Mcintosh’s strength as she is very strong in fly/bk and IM events, but no times posted in well over a year. Should be a good race for the remaining girls and predicting several under Fina A as entry times seem very dated.

Distance events are not Mcintosh’s strength?!! All Canadian girl NAG records both LCM and SCM up until 14 yo in 800 & 1500 belongs to Summer. If this is not strength….

Mcintosh has age group records all the way up in so many events and strokes. On a relative basis Mcintosh’s strength is not distance, so not surprised she dropped the 1500. With the lack of racing in Canada we have yet to see how other events have progressed.

According to a source (very) close to her, Summer hates swimming the 1500 event!

Don’t sleep on Dunford. She trains with the Sandpiper distance girls that just did so well at US trials. I think this is the only event she is swimming. She is an animal in the open water swims I’ve seen her in!

Watched Dunford in Florida couple months ago and was on way sub 16:30 but lightening struck literally and her and Sullivan and heat pulled from water.

Did Overholt also scratch the 400IM?

Right but I didn’t see her in the start list

It looks like it. By the comments of her dad in the 2fly post race interview sounds like she may be retiring. If so great career to be proud of and best wishes for healthy next steps.

If anyone has any info on why she is scratching or why she didn’t swim the 400 I’d appreciate it. Does she not want to swim the 1500 or does she think she can still get nominated for it without swimming?

She already has the A time for 400 free. Not sure about 1500. She will most likely be swimming them.

If she can get nominated for the 400 free based on her swim from a few weeks ago, that must also be true for the 1500. But there’s a decent chance that two women will be under the cut today which would leave her out. I can see why swimmers would not want to do both. Given that there is so much overlap between finalists in the 800 and 1500 free at international meets, it wouldn’t surprise me if FINA decides to drop the 800 at the Olympics once and for all.

I guess McIntosh doesn’t want to do the 200/1500 double at Olympics that Ledecky is attempting? Smart move I guess.

I think it’s more that she doesn’t want to do the 800 and 1500. That might become a trend. Sullivan didn’t seem as energized in the 800 final after already qualifying at 1500. And it could have been reversed motivation and energy for the two of them in the 800 if Grimes had narrowly pulled out second place at 1500.

Katie Ledecky is the only individual to attempt the insane.

But Ledecky has not attempted yet…. Adding 2×1500 to her lineup for the first time in a Tokyo. My bet she drops something.