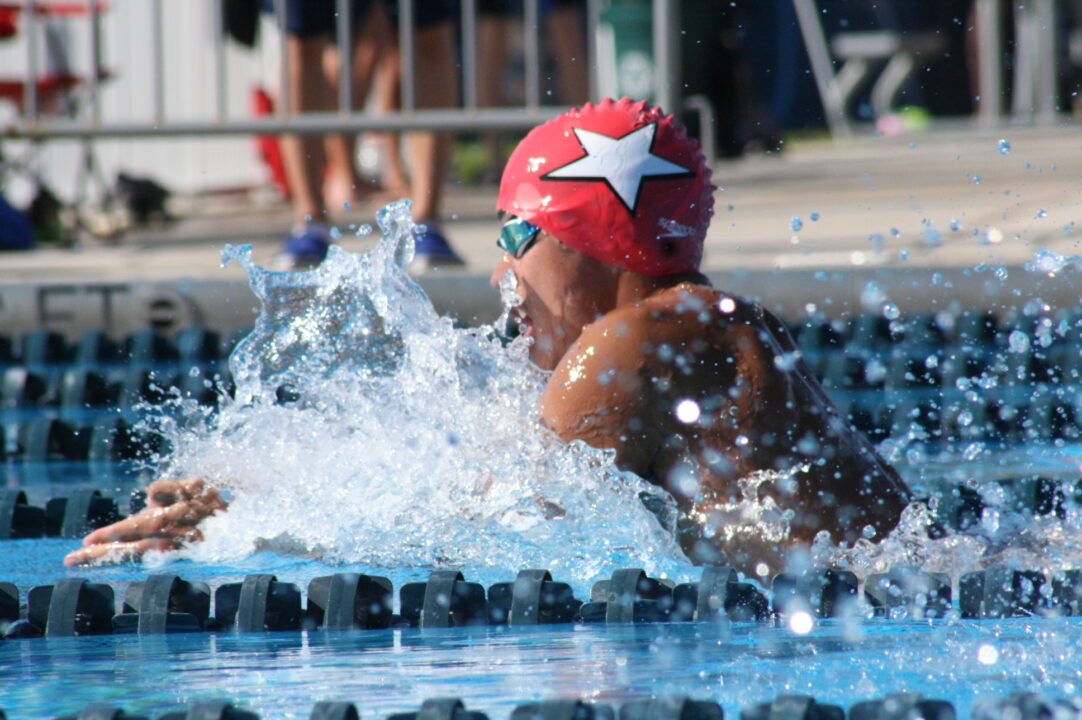 Adriel Sanes (above) came within two-tenths of the Olympic "B" standard in the 200 breaststroke at a meet in Florida in April. Archive photo via Nicole Miller/SwimSwam.com

The Virgin Islands Olympic Committee, which represents the Olympic interests of the U.S. Virgin Islands, has named a 4-athlete roster for the Tokyo 2020 Olympic Games, which includes 1 swimmer.

Adriel Sanes, who was born in the US Virgin Islands but went to high school in suburban Houston, Texas on the mainland, and Natalia Kuipers were chosen as the country’s two representatives in the pool at the Olympic Games.

Sanes most recently competed in the 2019-2020 season at the University of Denver, where he was named the 2020 Summit League Men’s Swimmer of the Championship. He was qualified to race in the 100 and 200 yard breaststrokes before that meet was canceled by the global coronavirus pandemic.

Sanes is the USVI Record holder in the 50, 100, and 200 meter breaststrokes in long course, as well as the 50 fly in long course and the 200 breast in short course.

The three long course breaststroke records were all set in April in Clermont, Florida at the UANA Tokyo Qualifier event. There, Sanes swam 28.31 in the 50 breaststroke, 1:02.41 in the 100 breaststroke, and 2:14.45 in the 200 breaststroke. His time in the 200 came within two-tenths of the Olympic “B” cut in the event, though he is ultimately a Universality selection.

He’ll swim the 200 breaststroke in Tokyo.

Sanes was one of a number of swimmers who was suspended by the University of Denver last fall for violating team COVID-19 safety protocols. After his suspension ended, he opted not to return to the program, but instead remained in Denver and trained with the Colorado Stars. There he swam under Todd Schmitz, who is best known as the coach of Olympic gold medalist Missy Franklin.

He has announced that he will transfer to Auburn next season.

Kuipers, meanwhile, also trains on the mainland at Bryant University in Rhode Island. She represented the country at the 2019 Pan American Games and at the 2018 Youth Olympic Games.

At the 2019 Carifta Swimming Championships, she finished 2nd in the 200 fly in 2:30.58, though has mainly focused on the distance freestyle races of late.

The USVI have competed at every Summer Olympic Games since 1968, aside from the 1980 boycott year, and have won 1 medal all-time – a silver in sailing in 1988. While legally a part of the United States, USVI is one of a handful of non-sovereign Olympic Committees recognized by the IOC prior to new rules outlawing entries by non-sovereign governments. This is the same status that allows other U.S. territories, like Guam and Puerto Rico, to compete independently at the Olympics.

USVI will also send Eddie Lovett as a Universality selection in athletics, specifically the 110m hurdles. He represented the country in Rio in 2016 as well. Archer Nicholas D’Amour is the country’s best medal hope: he currently ranks 9th in the world in the men’s recurve bow.

Yigit Aslan busted out a 7:51 under the Fina A cut as a high schooler over in Turkey but y’all got nothing on that?

Adriel Sanes actually time trailed the 200 breast at the UANA Tokyo Qualifier meet and went under the Olympic “B” cut with a 2:12.59