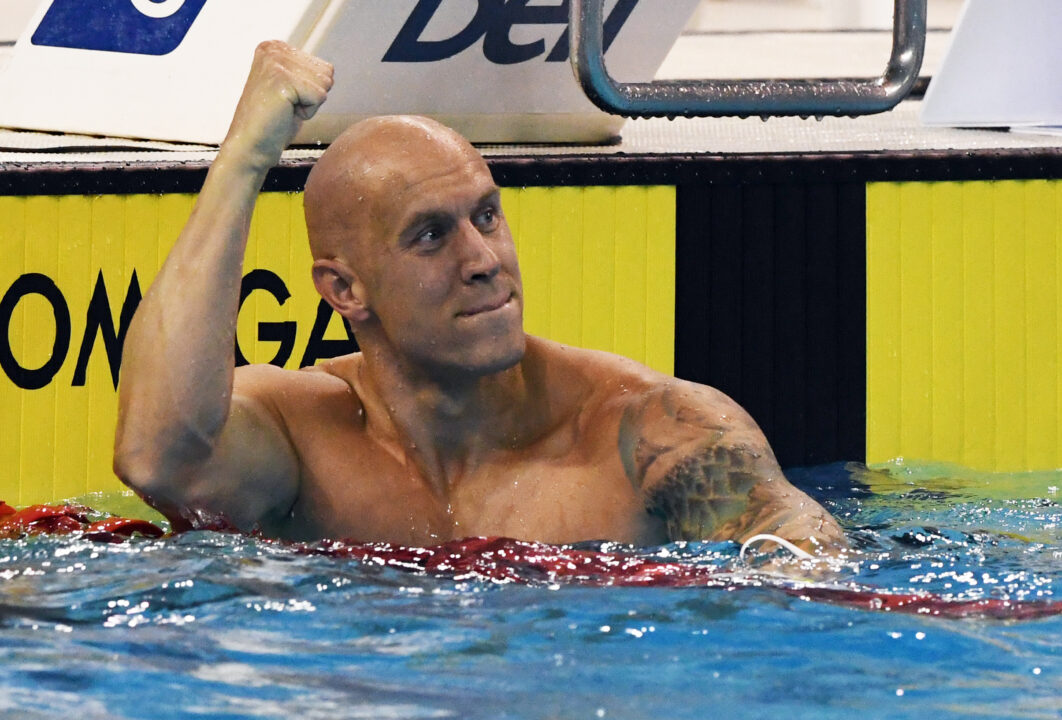 Brent Hayden will make his fourth Olympic appearance in Tokyo after winning the men's 50 freestyle at the Canadian Trials in Toronto. Current photo via Swimming Canada/Scott Grant

24 pool and two open water swimmers were officially named to the 2021 Canadian Olympic team on Thursday morning, with Swimming Canada making the announcement via Facebook Live.

With the five-day Canadian Olympic Trials wrapping up on Wednesday night, a total of 16 swimmers had achieved the Olympic ‘A’ qualifying standards during the Trials, including the six swimmers that received early nomination, meaning Swimming Canada added eight more athletes to its roster.

“It’s been the longest Olympic year on record,” said High Performance Director John Atkinson, who will serve as the “Team Leader” at the Games. “To get to the point that we can name our nominations to the Canadian Olympic Committee is a great step. The athletes who have made the team have shown their adaptability and resilience for the last 15 months and have shown that they are ready to compete with the best in the world.”

“The focus shifts to preparing in Vancouver at UBC for the final staging camp, leaving no stone unturned so that every team member can continue to progress and improve from their Trials performances when they compete in Tokyo. Having seen what they have done over the last five days, I know that they can thrive in the environment in Tokyo.”

Among the six swimmers that were named to the team back in January, three of them added individual events to their schedule in Tokyo at the Trials. The swimmers were only named to the team in event(s) in which they both finished in the top-eight at the 2019 World Championships and were the top Canadian finisher.

Among this group, Summer McIntosh is expected to be given the opportunity to enter both the women’s 400 and 1500 freestyle at the Games as well, with less than two women going under the ‘A’ cut at Trials and having been under herself within the qualifying period.

Brent Hayden comes in with the most Olympic experience on the team, with this being his fourth Olympic Games, having made his debut in 2004, retiring after 2012 in London, and announcing his comeback in late 2019.

Katerine Savard, who has had an up and down last five years in the pool, made a triumphant return to top form and will make her third straight Olympic appearance for Canada.

“After 2016 I had a couple of difficult years, I didn’t believe I’d be able to return to the level of performance that I had known,” said Savard. “I had a hard time setting new goals, new dreams.

“I chose, as my dream, to compete in my third Olympics. I trained really hard and honestly, I surprised myself. I didn’t believe I had it in me to do everything I did this week. I’m proud of myself and can’t wait to see what I can do in Tokyo.”

Among the eight names that Swimming Canada added to the team overnight, Ruslan Gaziev and Javier Acevedo got the nod as the second and fourth-place finishers in the men’s 100 freestyle, with the Canadian men qualified to swim the 400 free relay in Tokyo.

Yuri Kisil was the top seeded swimmer entering that 100 free final, but ended up injuring himself in warmup and had to pull out just minutes prior to the event. With Kisil’s prelim time of 48.43 under the FINA ‘A’ standard of 48.57, and only Joshua Liendo (48.13) going under during the final, Kisil will likely earn an entry into the individual event at the Games, in addition to being a huge relay asset.

Rebecca Smith and Mary-Sophie Harvey placed third and fifth in the women’s 200 free, respectively, which gets them on the team. Smith will also be a valuable relay swimmer at the Games with the ability to race the 100 free and 100 fly at a high-level, potentially chipping in on prelim teams.

Gabe Mastromatteo fell shy of the qualifying standard in the men’s 100 breaststroke (59.93), coming within less than two-tenths in the prelims (1:00.11), but still gets added to the team for medley relay purposes after winning the final in 1:00.75. Mastromatteo could also get an entry into the individual event since he’s under the ‘B’ cut.

The only swimmer added to the team without a clear-cut reason was Bailey Andison, primarily an IM specialist who placed third in both medley events at Trials. Andison was under the ‘A’ cut in the 200 IM. If Wog were to make the 100 breast final at the Olympic Games, she would have a tight double with the 200 IM semis shortly after, so it’s possible Wog plans on dropping the 200 IM, bringing Andison onto the team.

Fan and Sanderson were named to the 10k open water event in Tokyo based on their results at the FINA Olympic Marathon Swim Qualifier, held June 19-20, in Setubal, Portugal.

Where is Darragh? Didn’t he swim a 1:56-low in 2018? Was that before the qualifying period or during? If it was during I’d imagine they could put him on the roster since he won the event at Trials, albeit a bit slower.

He didnt hit the a standard and was not named.

Off topic: just saw Nadia, Butterfly with K. Savard in the leading role and loved it.

Glad to see she made the team.

What has Martyn Wilby done to deserve being named head coach?

Literally nothing but stand around on deck at Toronto Pan Am Sports Centre since April, looking extremely out of place.

Congrats to all the athletes – Strong Canadian womens team, and improving on the mens side.

So pleased to see Ben Titley doing so well, too. He was a fantastic coach at Luff and deserves all the success in the world.

Hau-Li Fan and Kate Sanderson both swim for Brad Dingey, but let’s pick Mark Perry for the OW coach. What does Perry even do except make bad decisions (putting Hedlin and Horner in the qualifier), drinking champagne, and working on his resume for the next job?

Not to mention Martyn Wilby

Swim Canada is so biased it’s crazy. Because open water is a bit more subjective than regular pool swimming they take it as an opportunity to try and pick the people they like wherever possible.

Some athletes weren’t even allowed to try and compete for an open water spot this year.

Acevedo was 4th in the 100fr, but Kisil and Hayden weren’t there in finals, so not sure what role they see him playing at the Olympics.

Kierra Smith selected based on a time from 2 years ago? Ok….

Harvey selected for being 5th in 200fr, but she only beat Sanchez by 0.11, and Sanchez actually made the team in 50fr and 4×100, and Ruck might show better 200fr form at the Olympics than she did at Trials.

Happy for everyone, but kinda puzzling on these 3.

Somewhat agreed. Very much depth moves in case of plan B, ie Hayden or even Kisil can’t go for the 4×1, something odd happens to Wog, extra depth for 4×2. There are still covid risks and exposures at play unfortunately. While the men’s 4×1 will need to fire on all cylinders to make the final, the women’s 4×2 has a decent chunk of wiggle room.

Yeah, the issue is that they HAVE to use these swimmers, and particularly in the case of the men’s 4×100, using Acevedo in prelims might keep them out of finals.

Mary-Sophie Harvey will be a relay only swimmer in the 4×200 free. Allows Canada to rest an extra body for finals (e.g, McIntosh or Oleksiak). I suspect Canada will use Ruck on day one in the 4×100 free prelims – if she continues to be off-form, adding Harvey supplies some depth to the prelim relay. A Smith-Sanchez-Oleksiak-[Harvey] should be able qualify for finals in the 4x200m.

Prelims lineup for the 4×200 free will probably be Smith-Sanchez-Savard-Harvey. Based on trials times, they can swim around 7:52, a time that will comfortably make the final.
Oleksiak has the 100 free heats in that evening session and also the 200 free final in the morning of that day, supposing she swims the event and qualifies.
They’ll bring McIntosh, Oleksiak and Ruck, if she is on form, for the final.

Thanks – I forgot about Savard and her 4th place at Trials in the 200m free.

Do you have to keep at least 2 of the swimmers from prelims for finals? If so this plan does not work.

There is no rule.for that. But all relay only swimmers must swim on that race. If you do not use one on prelims, you must use that person on finals

Agreed on Acevedo and Smith. I think Harvey is a deserving addition to the 4×200 prelim group.

Someone explain to me how a coach who put zero swimmers on the team gets selected over, say, the coach of a swimmer who is a contender for gold.

Not sure who this post is referencing … but, I noticed Linda Keifer not named to the coaching squad this year. Isn’t / wasn’t she Kylie Masse’s coach at U of T? The Rio team did okay with her on the coaching staff.

The Johnson brothers are there. The architects of the darkest days of Canadian international swimming ~1998-2006.

Congratulations to each and every one of the athletes selected for the team!

Kylie Masse has been training with HPCO for a while now according to Byron McDonald (one of her coaches) during one of the sessions, most likely because of U of T’s pool closure

and maybe because she graduated from U of T

PCSC had an impressive meet but no swimmers on the team. I’m referring to MacNeil as the star whose coach isn’t selected but now realizing her situation is a bit particular (she’s made her major gains at Michigan).