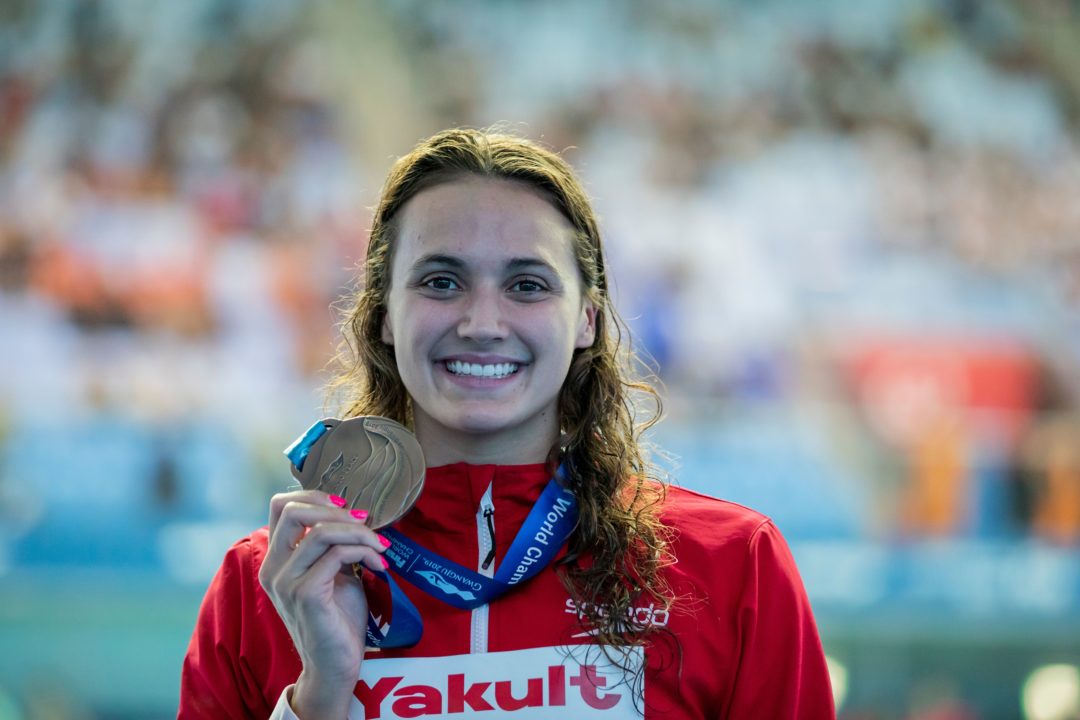 Swimming Canada announced the nomination of six swimmers to its 2021 Olympic team on Friday, along with a shift in both the dates and format of the upcoming Olympic Trials.

The Trials will now move to May 24-28, and an invitational meet will follow June 21-23, with Olympic nominations to be made after both events.

Individual 2019 World Championship medalists Kylie Masse, Maggie MacNeil and Sydney Pickrem have been nominated by Swimming Canada to the Canadian Olympic team, as have Penny Oleksiak, Taylor Ruck and Markus Thormeyer, all of whom made an individual final in Gwangju.

Masse has been named in both the women’s 100 and 200 backstroke, having won gold and bronze in those events in 2019, while MacNeil gets the nod in the women’s 100 butterfly as the reigning world champion. Pickrem has been nominated in three events: the women’s 200 breaststroke and 200 IM, where she was the World Championship bronze medalist, along with the 400 IM where she finished fourth.

This marks the first Olympic team for MacNeil, while it will be the second appearance for the other five, who were all present in Rio.

“It’s definitely a different way to be named to the Olympic team, but it’s still exciting,” said Masse, the 2016 Olympic bronze medalist in the women’s 100 back. “It’s been a challenging year so it’s nice to have a little bit of certainty in a time of so much uncertainty.

“And moving forward, it just allows us more flexibility with our training. It kind of takes that pressure off. It just gives us a little more time to train and try and be the best we possibly can at the end of the summer.”

These swimmers will have the opportunity to add events to their Olympic program in the following months.

“These are our real world performers,” said High Performance Director John Atkinson during media availability on Friday. “We have great faith in these athlete’s ability. They are already proven at the international level, they are international medalists.

“What we feel this will give our key world performers is some certainty in a very uncertain world. It will give them the opportunity to prepare for these events through to the Games in Japan, starting on the 23rd of July. It will give them the opportunity to real use the competitions that we can organize now to fine tune, prepare the things they would normally do in all the competitions that are normally around.”

After announcing in December that the Olympic Trials in April would be a timed final meet with only 20 swimmers invited per event, Swimming Canada has moved the meet back seven weeks.

The previously scheduled April 7-11 Trials will now take place May 24-28, still at the Toronto Pan Am Sports Centre (TPASC) in Toronto, following the same competition format.

“That Trials will be done exactly the same way (as was scheduled in April),” said Atkinson.

However, these Trials will now not have any automatic qualification based on performance. Instead, the Swimming Canada selection committee will meet after the competition and nominate certain athletes in certain event based on the performances.

Following that, there will be another invitational meet June 21-23 where more athletes will have the opportunity to race and give themselves a chance to be nominated for the Games. The hope is to have the meet feature both prelims and finals.

Following this meet, the final round of selections for the Olympic team will be made.

“In terms of nominations from May, that could happen,” said Atkinson on the altered selection process. “There could also be some events held over until June.”

Atkinson also anticipates a relatively regular-sized Olympic team, somewhere in the 22-26 swimmer range, despite the change in qualifying procedure. In 2016, Canada sent 28 swimmers to the Games.

Huge news for any Canadian NCAA athletes (assuming NCAAs go on as planned).

why many countries are not accepting international athletes in their nationals ?

If you were a national federation, and you were told “you can have X number of participants,” would you be inclined to give those spots to the members that you’re being funded to serve, or to athletes that will represent other federations?

Great for the athletes, but this is not the purpose of the Olympics. At some point there will be no trials and countries will just send all the swimmers by picking from results of 2019

Lots of countries already do this for every Olympics…

We are in a pandemic. Other countries have also done this like the UK. These athletes have earned this preselection spot and now they can put their heads down, train and aim for the podium for Canada. It also protects them from any future Covid incidents/ mandatory quarantines which is great. Congrats to all of them! Many sports/countries preselect athletes outside of 1 trials event (ie the previous years worlds results) which in many ways makes a lot of sense.

There is still 1 spot open in each event where there was a preselection. So go for it!

These 1st 6 as head coach mentioned are absolute proven international performers and in this given year absolutely deserve this pre-lim selection. Other years SNC would have this clause anyways, not necessarily for finalists but certainly for winners, so Masse and MacNeil would get that nod. This is the best of all worlds under the situation:
a) the top end as above are selected and now can not worry about quarentines or other
b) the next set of 20 or so possible qualifiers will have their shot in May from the list of top swimmers past 18months.
c) any up and comers who may have otherwise not been on the radar just yet still have a shot… Read more »

Yes. I completely agree with you if you look at my posts above. Maybe your reply was meant for swimfin5?

Yes…:) sorry, sometime I reply under the thread, assuming its all for the 1st comment.

Np! And again I completely agree with you!

Six people is only part of the full 32 member (I believe but Canada won’t max out like the US) so no, this does not take away spots from other swimmers, they can still qualify. This is standard practice for many NGB (some even have 5 or more clauses for qualifying)

Only larger countries with larger bodies of sportsmen and women in a particular sport actually hold their own “trials” – USA track and swimming, Can swimming, Aus swimming and many others, but that is actually the not the norm. If you do not have critical mass of numbers and actual competition, then a trials doesn’t make sense. I don’t believe Sarah Sjostrom qualifies for Sweden on a 1-shot Swedish trials.

Larger countries- that would be Canada at number 2 .

Which still makes it the 2nd largest country . 38 million ppl is in the top 40 also.

This isn’t really anything new. Anne Ottenbrite was injured and didn’t swim at Canadian Trials in 1984. Mark Tewksbury was an automatic on to the Canadian team in 1992. Vladimir Salnikov was added to the Russian team late in 1988. And what do they all have in common? They all won Gold.
Most countries don’t have the luxury to take the next in line if the favorite falters. In fact most countries can’t muster 2 swimmers per event under the FINA standard.
In the case of these 6 swimmers if they falter nobody is going to replace them, it will just be a blank entry.