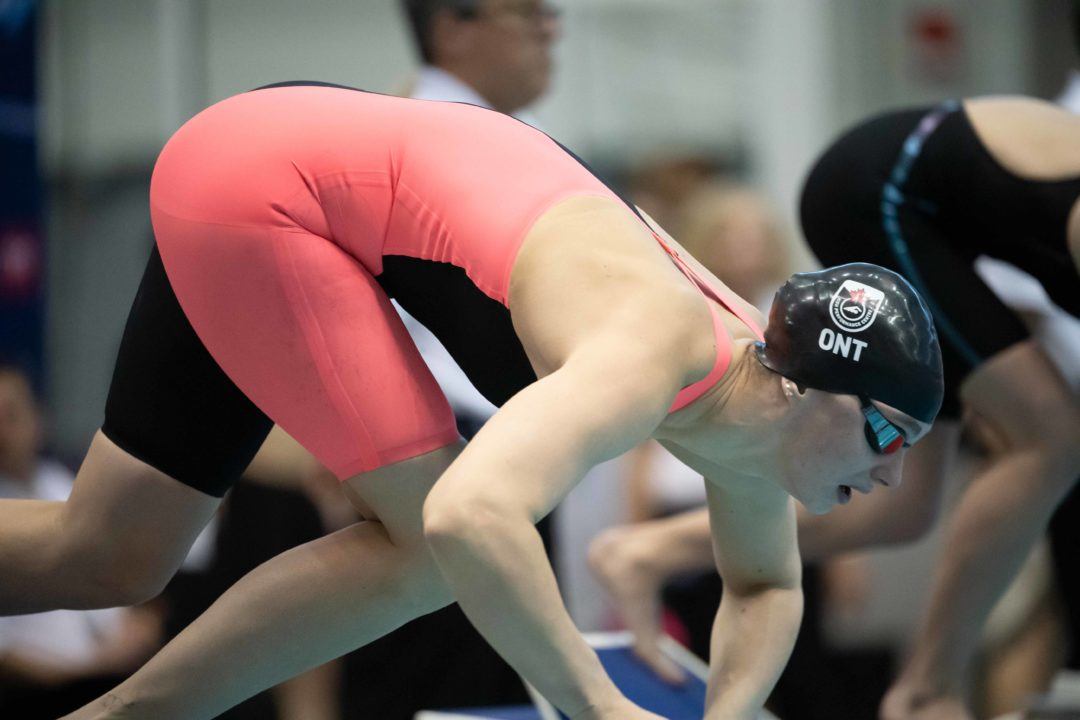 Having already qualified to race the 200 freestyle in Tokyo, Oleksiak will be hoping to make her return to the Games in 100 freestyle. Archive photo via Mike Lewis/Ola Vista Photography

2016 Olympic gold medalist Penny Oleksiak came in strong during day 4 prelims at the 2021 Canadian Olympic Trials with a 54.00 100 freestyle to claim top seed heading into the final.

Oleksiak’s 54.00 was under the FINA A standard of 54.38 which is the time it will take in order to qualify for the Olympics in the event during the final. Oleksiak holds a PB of 52.70 in the 100 freestyle which she swam 5 years ago to win gold in the women’s 100 freestyle at the Rio Olympics. That mark is also the current Canadian record in the event.

While the 54.00 was good enough to earn top seed, she was actually a little bit faster a few weeks ago at the Take5 High-Performance time trial in Toronto when she hit a 53.67. In fact, Oleksiak’s prelim swim here was only her 20th fastest swim ever.

During the finals, there will only be 1 Olympic spot up for grabs in the event as Taylor Ruck was pre-selected in the event based on her 53.03 5th place finish at the 2019 World Championships.

Ruck was present during the prelims and swam a 54.73 which trails her 52.72 PB in the event from the 2018 Pac Pacific Swimming Championships.

With only 1 spot on the line, Oleksiak will need to hold off a rather difficult field in what is arguably Canada’s deepest event right now.

Olympic qualified Kayla Sanchez will be racing in the final as second seed, having posted a 54.18 during the prelims which is also under the FINA A standard. Last night, Sanchez made the Olympic team by winning the 50 freestyle with a 24.68.

Following Oleksiak, Ruck, and Sanchez, Katerine Savard was a 54.82 for 4th overall and Rebecca Smith and Maggie MacNeil tied for 5th in a 54.88. MacNeil and Savard have already qualified for the Games in the 100 butterfly after placing going 1-2 in the event on night 1.

Additionally, both Smith and Savard have also likely qualified to race the 4×200 relay in Tokyo after placing 3rd and 4th, respectively in the final.

Interested in others’ views on this. Should a spot be held back based on the 2019 World’s or would you rather they race for the 2?

imo I would have liked to see them race for the 2 – some of the events that swimmers got nominated were events where the battle for top 2 is real tight (the fr and IM events for instance) so even though everyone that was nominated via the 2019 Worlds deserves it a fight for top 2 seems more appropriate.

Race for the two spots.

Generally, I think you’d want competitive racing at Trials. Why are the US so good? Part of the reason is that the in-country competition is so intense that you have to swim fast to make the team. Swimming fast is a good way to prepare to swim fast.

Canada is not the US. The chance of Canada have 3 or more medal hopefulls in an event is somewhat remote.

Over the last 30+ years, Canada has used a range of selection criteria and pre-selection policieis for Olympic teams. I think the “medal at the most recent Worlds” is a bit sounder for preselection – Canada went to “top Canadian Worlds finalist” for pre-selection as a response to the pandemic.… Read more »

Think the delay due to the pandemic has made this more of an issue. 2019 seems a lifetime ago.

All the same I do think that the way forward is ruthlessly competitive trials and national championships. The only real argument against this I can see is if someone is temporarily ill.

At first, when Swim Canada pre-selected the 6 swimmers in certain events earlier this year due to Covid circumstances, I thought it made a lot of sense. And for the other events in which swimmers were pre-selected, those swimmers have, thus far, won the event or finished 2nd under the A standard (I think). But the women’s 100m free is looking to be the trickiest out of the bunch mainly because Ruck is not on form/sick/injured. I don’t expect that she’ll win, or finish top 2, or meet the A standard tonight which definitely opens up the debate. If, let’s say, Oleksiak and Sanchez swim crazy good times tonight, I wonder if Swim Canada will consider pulling back Ruck’s pre-selection.

Germany also did something similar, but only in events where it was (pretty) clear that no 2 other athletes would get the standard. Canada doesn’t really have a lack of talent in women’s 100/200 free, so i would have preferred to see them leaving both spots open, although i am not sure when they made that decision? I think it might have been a different story if the olympics would have taken place last year. A lot can happen in 2 years …
Maybe they could have said that Ruck will get an individual spot if no other 2 swimmers put up a faster time (than her 53.04 from 2019 worlds) and then it would have been her own… Read more »

I think the top 2 100 freestyle swimmers should be the ones to go to the Olympics. What someone did back in 2019 has no bearing on what one does today. For example, Simone Manuel was the world champ in the 100 free back in 2019 but she was not prequalified; plus due to her health issues she did not qualify for the 100 this time

With Manuel qualifying in the 50m free, the US may still use Manuel in the 4x100m free and she may turn out to be their best 100m freestyler in Tokyo.

What has happened to Taylor Ruck?

There’s been some info floating around that she has a wrist injury and/or may be sick.

I thought she looked pretty good off the blocks and down the first stretch of this race, but faded near the end. It’s too bad she scratched the 50 yesterday – maybe we could have gotten two swimmers under the standard.

Shouldn’t you be changing your name to:

Unless Ruck is training through this meet she should give up her spot if she is crushed in the final.

I was told on another post this week that Ruck had both a fractured wrist that she was holding off surgery, and some other health issues this past year. So tough for her, hope she is ok with her decisions first and foremost and not pressured externally.

As mentioned here CAN has had varied selection approaches. If we want the best team at a give champs then we have to protect some of the medal contenders. Covid conditions aside I like a 3 tiered approach:
1. Pre selection if you medal at previous years worlds
2. Then top 2 at a spring/April trials if both under Fina A
3. Provisional spot only if you win but are… Read more »