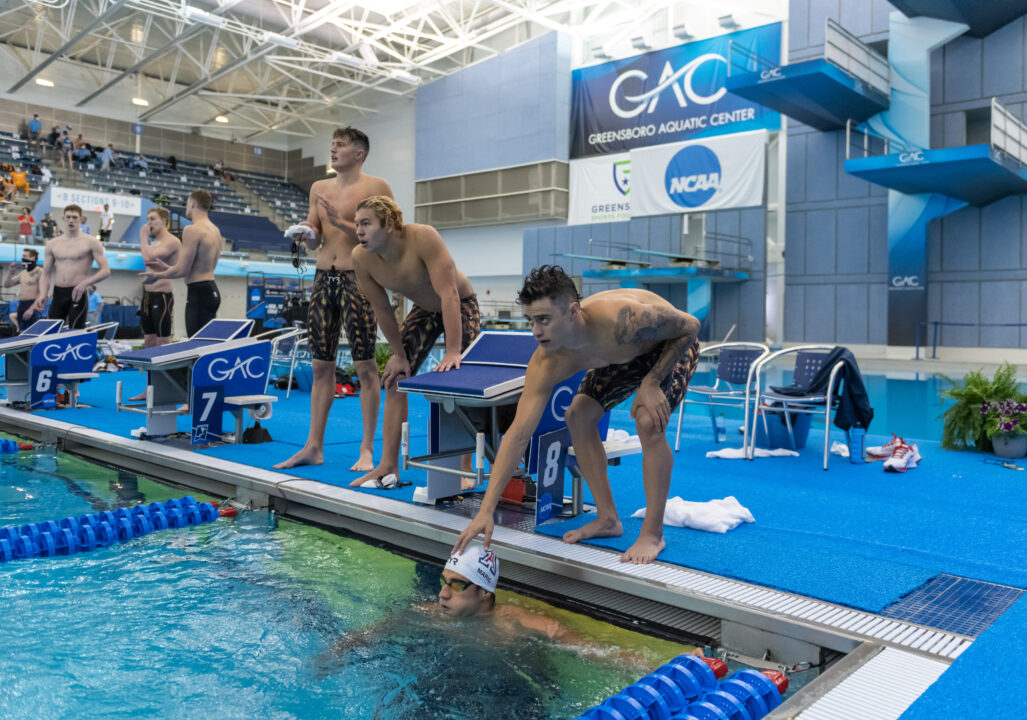 The Wildcats get a boost this season as Brooks Fail, their leading individual scorer last season, returns for a fifth year. Archive photo via

After a one year-hiatus to the uncertainty surrounding the 2020-2021 season, our college previews back! We’ll be previewing the 2021-2022 seasons for the top 12 men’s and women’s programs from the 2021 NCAA Division I Championships – stay tuned to our College Swimming Previews channel to catch all 24.

Arizona didn’t have a very flashy season, but the Wildcats kept improving all season and capped off their campaign by tying for 12th at NCAAs. David Schlicht, returning from a redshirt year, impressed early on, dropping a 3:40 400 IM at the Arizona Invite, and Brooks Fail also impressed at that meet.

Outside of those two stars, though, it was a pretty quiet winter for Arizona, with a shorthanded dual meet loss to UNLV perhaps the most noteworthy happening between the Invite and Pac-12s.

However, the Wildcat faithful were rewarded for their patience, as the team showed up for Pac-12s. Fail, Schlicht, and Marcin Ercegovic powered the team individually, the relays racked up top-three finishes and NCAA qualifying times, Arizona took 3rd behind Cal and Stanford.

Eight swimmers and two divers qualified for NCAAs, and while most of that squad struggled to quite match the times they put up at Pac-12s, once again the stars and the relays came through. Fail scored 42 points across three A-finals, including a brutal 1650/200 fly double on the final day, Schlicht added another 28 in a pair of A-final IM appearances, and four out of the five relays scored, earning the Wildcats 106 points and a tied-for-12th place finish alongside Michigan.

Freshmen Grant Stoddard and Jack Donovan both bring 20-point 50 freestyles, while transfers Evan Holt and Ryan Purdy both arrive from Iowa with some mid-distance potential.

The distance group was a one-man show last year, but there’s not a lot of better one-man-distance-show options than Brooks Fail. He delivered when it counted, taking 3rd in the 500 free and 4th in the 1650 at NCAAs. He’ll return this season using his 5th year of eligibility, and while the NCAA should be deeper this season, he still feels like a lock to make the A-final in both events again.

Fail also had the fastest split on Arizona’s 4×200 free relay, putting down a 1:32.84 that was over a second faster than any other Wildcat swimmer.

There’s not much depth behind Fail, but the aforementioned Holt hit lifetime bests of 4:21.08 and 15:24.47 at last year’s Big Ten Championships while swimming for the now-defunct Hawkeye men. That 4:21 would’ve him Arizona’s 2nd-fastest swimmer behind Fail at Pac-12s.

Ogi Maric returns as a junior after swimming both backstroke events at NCAAs last season. Individually, he went 46.56 in prelims, although his season-best time of 45.90 would’ve placed him 17th in prelims had he matched it. He hit times of 21.4 and 46.1 on the relays, keeping the team in the hunt for points.

The Wildcats have lost both of their NCAA breaststrokers in the form of David Schlicht (transfer) and Sam Iida (graduation).

Freshman Tate Bahti comes in with  bests of 55.5/2:01, leaving him in a good position to be a developmental piece.

This is currently one of Arizona’s deeper events, with four men having competed in fly events at last year’s NCAAs, and three of those are returning. That group is led by Fail, who took 8th in the 200 fly not too long after swimming the 1650 on the final day of the competition.

While senior Noah Reid has graduated, Brooks Taner returns after swimming both fly events at NCAAs. Daniel Namir is more of a freestyler, but did swim the 200 fly last season as well. Santana comes in with a lifetime best of 46.5 from 2018, putting him on the bubble for NCAA qualifying if he can match that time.

This is another discipline where the Wildcats are a bit depleted due to graduation or transfer. Schlicht was an A-finalist in both IM events last year, and Iida added a swim in the 200. Those were the only three IM swims the Wildcats had last season.

Both Eric Correa and Bjorn Markentin competed in all three diving events at NCAAs. Correa finished as high as 24th on the platform, while Markentin’s 26th place in the 1m representing his highest finish.

Last season, Arizona’s relays seemed to be a classic case of the wholes being greater than the sum of their parts, as they scored 36 relay points over four events despite a lack of “big names”. Ercegovic and Marcin should form the core of the sprint freestyle relays again, as well holding down free and back, respectively, on the medleys.

Foote should hold down the breaststroke leg, and either Brooks or Santana should end up on fly.

All four legs of the NCAA 800 free relay return, and Reid is the only leg they’re losing from the sprint free relays. On paper, it looks like he’ll be tough to replace, but either Santana or one of the freshmen should help blunt his loss.

All told, the Wildcat relays could end up taking a small step back, but still appear to be in pretty solid shape, in terms of NCAA scoring potential.

We tend to have a hard time pegging the Arizona men, and this year is no exception. The feeling of uncertainty isn’t helped by the fact that the program may face some level of sanctions after the NCAA resolves accusations that the program committed Level II violations. On hand, it feels likely they’ll slip at least a few spots at NCAAs in between losing Schlicht and Arizona State’s and Harvard’s likely return to competition this season. On the other hand, we’ve  seen Arizona surprise before, and if they can get a few guys to repeat fast Pac-12s time at NCAAs, they have the potential to make a run at the top ten again.

Santana has been 21.1 in the 50 Back. I’d imagine being more than a half second faster than Marcin would earn him a spot there to upgrade that 200 Medley.

Isn’t it a bit concerning that such a storied program needs a 5th year from swimmer who has been on the team longer than the coaching staff to stay remotely relevant at a national level?

Fascinating the team has to taper at pac12s says it all.

Fail doing a 5th year for Arizona is great.