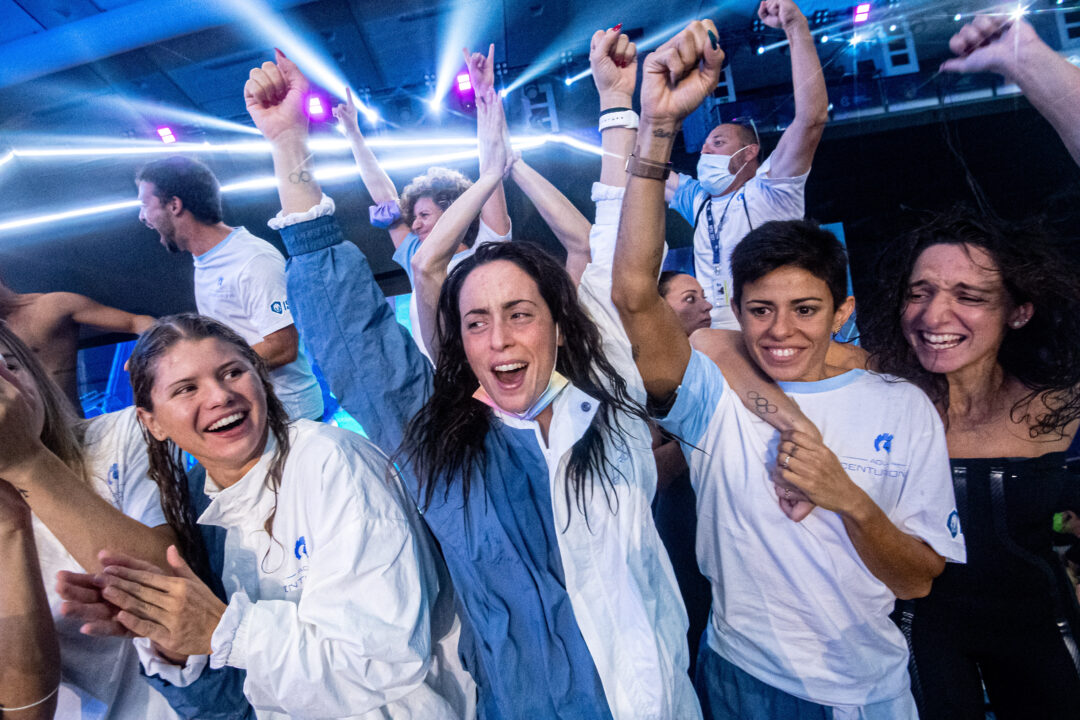 The Aqua Centurions picked up the first win in franchise history on Sunday to secure their place in the Playoff round of ISL Season #3. Archive photo via Giorgio Scala / Deepbluemedia / Insidefoto

The Aqua Centurions’ win in ISL’s Match #10 cements their placement in the Playoff round of competition and sets up the lineup for the Play-In Match next week.

The Aqua win was significant not only for this season’s standings, but for history too: coming into Season 3 of the ISL season, the Italian team not only were winless in ISL history, but they had never placed anywhere but last.

They already broke the latter streak, and in fact didn’t finish last in any of their four meets this season, and now they’ve grabbed their first-ever ISL victory.

This also means that the hero of Italian swimming, Federica Pellegrini, whose star transcends sport, won’t have her final match in front of a home crowd in Italy. She was the biggest draw of the ISL season this year, and while it would have been a fairytale ending in one sense for her to race her last meet on home soil, it’s maybe even more perfect for her to be counted out, and win again, to trudge onward – as she did so many times in her career.

By design or happenstance, the ISL’s meet schedule lined up 4 of the bottom 5 teams in the league in Match #10, which aside from the short straw for the DC Trident, gave those teams a fair chance to grab the sixth position – the only significant movement possible on the last weekend of the year.

Iron had their best performance of the season in Match #10, which gives them designs on a spot in the 8-team Playoff round, but we can’t overlook the Trident, who have improved all season long, on the basis of their Match #9 loss.

The Breakers appear, on paper, to be odd-team-out headed into the Play-In match. The other three teams have a legitimate chance at a top 2 spots, as the absence of the top 6 teams will dramatically change the dynamic of the meet: events where teams might be mediocre against the Cali Condors, for example, they might be strong against the bottom four teams.

If it comes down to the Skins race, that’s an advantage for Iron. Their 257 Skins points this season, anchored by Ranomi Kromowidjojo, are second-most in the entire league behind only the Cali Condors.

In a season that hasn’t featured many competitive outcomes, the Play-In match, even without most of the league’s stars or any of the league’s best teams, should be one of the more exciting matches of the season.

Iron and Tokyo I hope

I don’t understand this competition.

What’s the point of a regular season when every team makes the playoffs?

Breakers are locked in for last there’s no other place I can see them finishing, but I think the battle could be interesting between iron, trident and Tokyo. I think iron are the favourites to win but if DC get some momentum they could spoil the party and I really want to see DC get through so we get some more ISL vlogs

Iron and Tokyo are my guesses

I want Tokyo to make it so that Seto can swim the final. He could do some very good times with a little taper.

Honestly I wouldn’t be shocked if the teams will go into a short mini taper ahead of this meet in order to try and make the playoffs. So we could see some fast times this meet

Iron definitely 1st and NY definitely last, gonnna be an exciting battle for the last spot betweem DC and Tokyo.

I think those are the teams. I could hear debates on the order. Iron certainly feels like they’ve got momentum. Iron has been just so good at skins. That might make the difference.