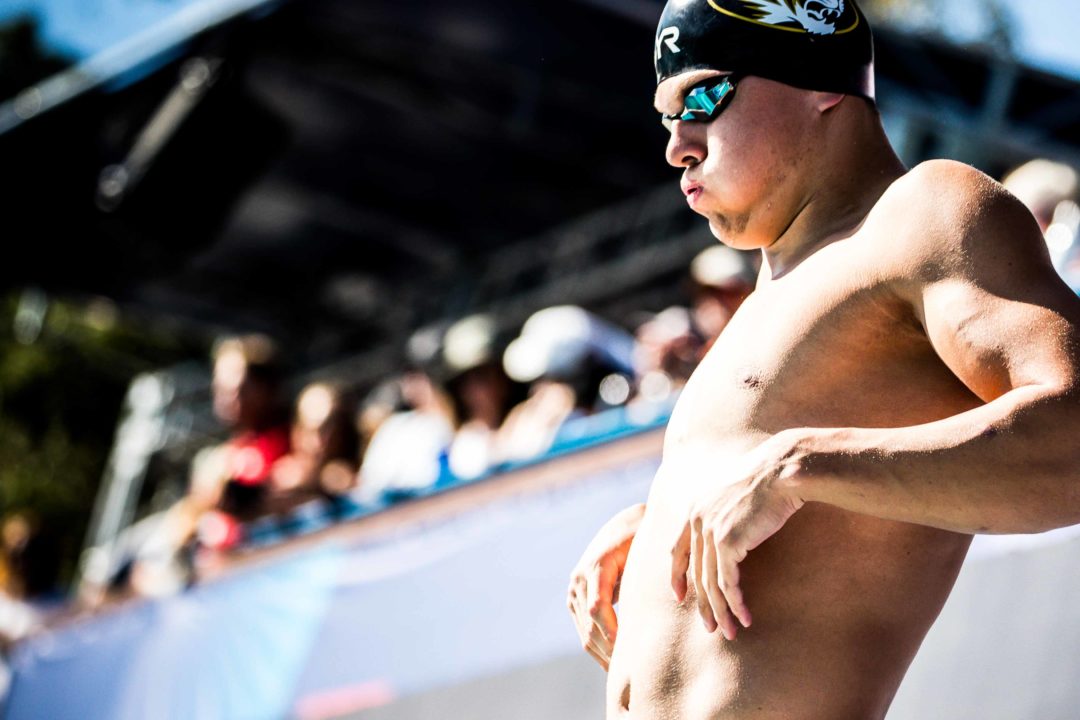 Mizzou was dominant in the first session of racing at the 2020 Mizzou Invite, and junior Danny Kovac was only 0.06 off his lifetime best in the 200 IM. Current photo via Jack Spitser/Spitser Photography

Arkansas’s Peyton Palsha opened thing up with a 4:40.95 in the women’s 500 freestyle in the first heats of the 2020 Mizzou Invite this morning in Columbia. Though Palsha was a little over 2 seconds off her lifetime best from the 2019 Mizzou Invite she nonetheless cut nearly 11 seconds off of her 2020 season best time, granted she seems to have only had one opportunity to swim the 500 in a sanctioned meet prior to this morning. Kentucky’s Beth McNeese finished 2nd in this morning’s prelims in 4:44.28, though her lifetime best from the 2020 SEC Championships is considerably quicker at 4:38.97, only 0.11 behind Palsha’s lifetime best, meaning the women’s 500 could be a close race in this evening’s finals. Kentucky freshman Kaylee Williams will go into finals seeded 3rd with a 4:46.59, within a second of her lifetime best from 2019 Winter Junior Nats – East. Mizzou’s Allison Bloebaum knocked almost a second off of her best time to take the 4th seed going into finals with a 4:47.10, marking her first PB in the 500 since 2017.

It took a 2:00.12 just to make the ‘A’ final in the women’s 200 IM, and Kentucky’s Sophie Sorenson leads the way with a 1:58.42, a little less than 2 seconds off her PB but much improved over her mid-season time last year of 2:01.12. Arkansas’s Adela Vavrinova was nearly equal to Sorenson, touching in 1:58.43. Though Sorenson was more than a second ahead at the 150, Vavrinova reeled her in with a big freestyle leg but was just out-touched. For Vavrinova, this morning’s swim comes as a new lifetime best by 1.5 seconds and is a marked improvement from her 2019 mid-season time of 1:59.97, her previous PB. Mizzou’s Katrina Brathwaite qualified 3rd in 1:58.87, marking her first time under 2:00.

Swimming exhibition, Kentucky freshman Trinity Ward and Caitlin Brooks both showcased nice improvement on their lifetime bests. Ward touched in 2:02.22, taking a massive 4.03 off her previous PB set in 2017, while Brooks, who finished in 2:02.88, sliced 2.5 seconds from her 2017 lifetime best.

Mizzou’s Sarah Thompson and Megan Keil were the only women under 22 in the women’s 50 free this morning, qualifying 1st and 2nd in 21.76 and 21.83, respectively. Thompson has been under 22 numerous times and has a best time of 21.53, though this is Keil’s first time to break the 22-second barrier. Emily Barclay qualified 3rd for Arkansas in 22.41, cutting over half a second from her previous PB set just earlier this fall.

Swimming exhibition for Mizzou, Jackson Kent dropped over half a second and broke the 21-second barrier for the first time, registering a 20.52 which, if scored, would have placed him 9th in the prelims.

Mizzou’s 200 freestyle relay(s) for both men and women will be loaded this evening, though all three teams will be able to pull in other swimmers that did not race the 50 individually to bolster their chances of winning, getting an NCAA automatic or provisional time, or ideally both.