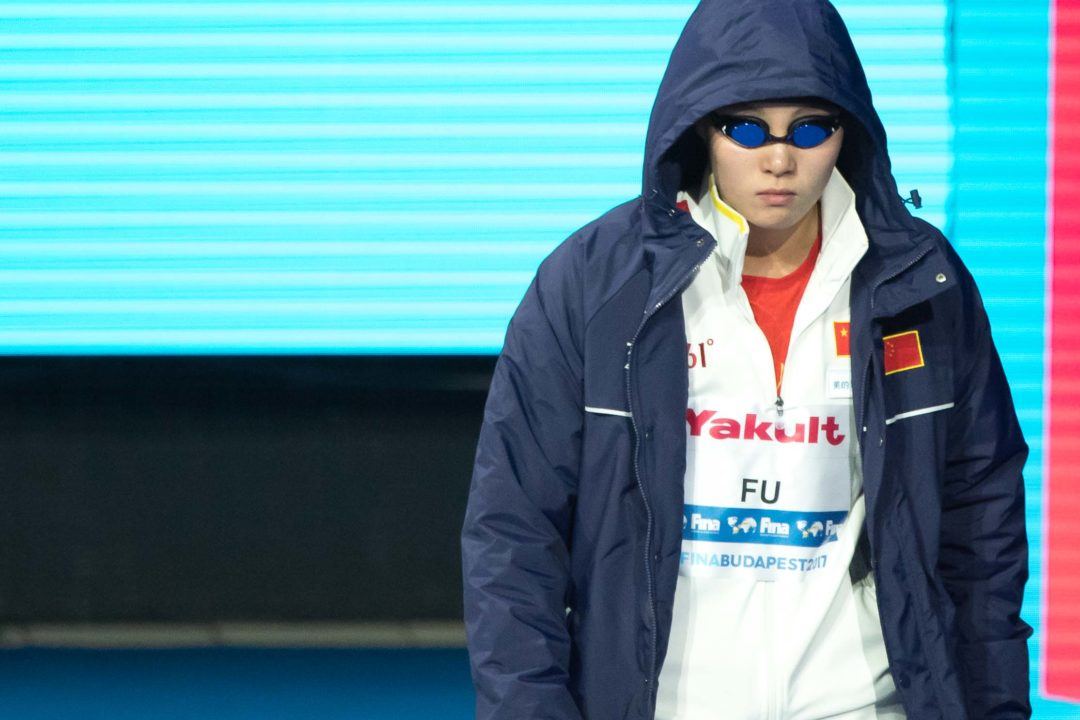 Fu is the third-fastest performer in world and Chinese history in the women’s 50 meter backstroke–a testament to China’s prowess in the event–as well as the top seed going into Worlds. Fu won the silver medal in the 50 back at the 2017 World Championships, touching only 1/100th behind Brazil’s Etiene Medeiros, and the 2018 Asian Games when her teammate Xiang set the World Record. Having been 27.1 on five different occasions, perhaps Fu may also challenge the World Record.

Brazil’s Etiene Medeiros is the defending 2017 World Champion in the women’s 50 backstroke and the owner of the fastest time in the world this year with a 27.36 from April. Medeiros is the World Record holder in the 50 SCM backstroke, but finished off the podium in both the 50 and 100 back at the 2018 Short Course World Championships in China last December, failing to even make the final of the 50. 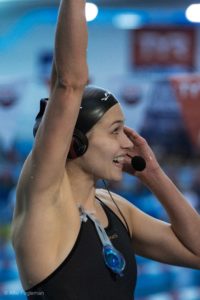 American Olivia Smoliga has been building momentum since the 2018 Short Course World Championships where she won individual gold medals in the 50 and 100 backstrokes for a record 8 gold medals total. Smoliga upset the world order in both of the sprint backstrokes, beating the likes of Medeiros, Fu, Emily Seebohm, Katinka Hosszu, and teammate Kathleen Baker, to name a few, en route to her individual golds. Smoliga set the American Record in the 50 backstroke in the spring of 2018 at the Pro Swim Series stop in Mesa, Arizona. In similar fashion, Smoliga improved upon her own lifetime best in the 100 backstroke with a 58.73 at the Richmond stop of the 2019 PSS in April.

100 backstroke World Record holder Kathleen Baker has had a rocky 2019, but can’t be written off for a spot in the finals of the 50 backstroke. At the 2018 U.S. National Championships when Baker broke the World Record in the 100 back, she hit 50 meters in a blazing fast 27.90 to her feet. For perspective, Baker’s 2018 split would rank her 16th in the world currently in the 50 back in 2019, though her own 27.76 ranks her 8th. In May, Baker revealed that she fractured a rib while coughing due to an illness in April. Because of the injury, Baker, under the advisement of Team USA, skipped the Budapest stop of the 2019 FINA Champions Series. In June, Baker dropped the 200 IM from her World Championship lineup to focus exclusively on backstroke. Baker’s most recent and season-best 50 backstroke, a 27.76, came in March at the Des Moines stop of the 2019 Pro Swim Series. 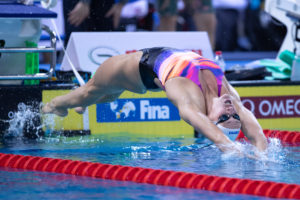 Great Britian’s Georgia Davies has been climbing higher with seemingly every major competition she races. At the 2017 World Championships, Davies placed 8th in the 50 backstroke in a 27.61, though she had been 27.49 in the semis. At the 2018 Commonwealth Games, Davies placed 3rd in 27.90, still well off her time from 2017. Last August at the 2018 European Championships, Davies won the 50 backstroke in 27.23, though she set the Championship and European Records in the race in the prelims with a 27.21, just ahead of Russia’s Anastasia Fesikova, who took silver in 27.31, leaving bronze to Finland’s Mimosa Jallow. Davies and Fesikova flip-flopped in the 100, with Davies taking second in 59.63 and Fesikova winning in 59.19. Davies, Fesikova, and Jallow all stand great odds at making the final of the 50 back at Worlds next week, with Davies and Fesikova in particular having very realistic shots at winning a medal.

Australia’s Kaylee McKeown is better known as a 200 backstroke specialist, but after going a 27.65 in the 50 at Australian Trials in April, it’s hard to justify leaving her outside of the top-8 in this one-lap race. Fellow Aussie Minna Atherton is another to watch. Atherton has a best time of 27.49 from 2016, and has been 28.03 this season. Atherton and McKeown will also represent Australia in the 100 backstroke after qualifying 1-2, respectively, at Aussie Trials with impressive times of 59.20 and 59.28.

Dark Horse: Italy’s Silvia Scalia set the Italian record in the 50 backstroke in April with a 27.89, and again nearly equaled that time with a 27.92 to win the gold medal at the recent 2019 World University Games. Scalia will also be swimming the 100 backstroke at Worlds.

Fu won’t be that slow…

Her best this year is 27.6
Her tapered time last year was 27.68
I think I’m actually being generous

Bit harsh on Davies I think. Don’t see why she’d add .3 to her entry time unless youre predicting a missed taper or other issue?

She hasn’t looked 100% this year, to me at least. She was very disappointed with her times at trials and expected she’d be much faster – which leads me to believe she was quite rested there. I think she’ll easily go a season best but I don’t see her touching her PB from Euros last year, unless she has the breakthrough that she and James have been expecting. If she matches her PB then I think she wins the world title outright, but I don’t know what to expect from her to be honest. Any insight?

Trials didnt click, but she has been fast either side of trials in the 50. She has consistently had 1 good meet a year for the past 4/5 years – Either hit trials, or worlds/olympics, never both. Ups & downs is par for the course with Georgia

I want more hilarious interviews with Fu. Who’s with me?!