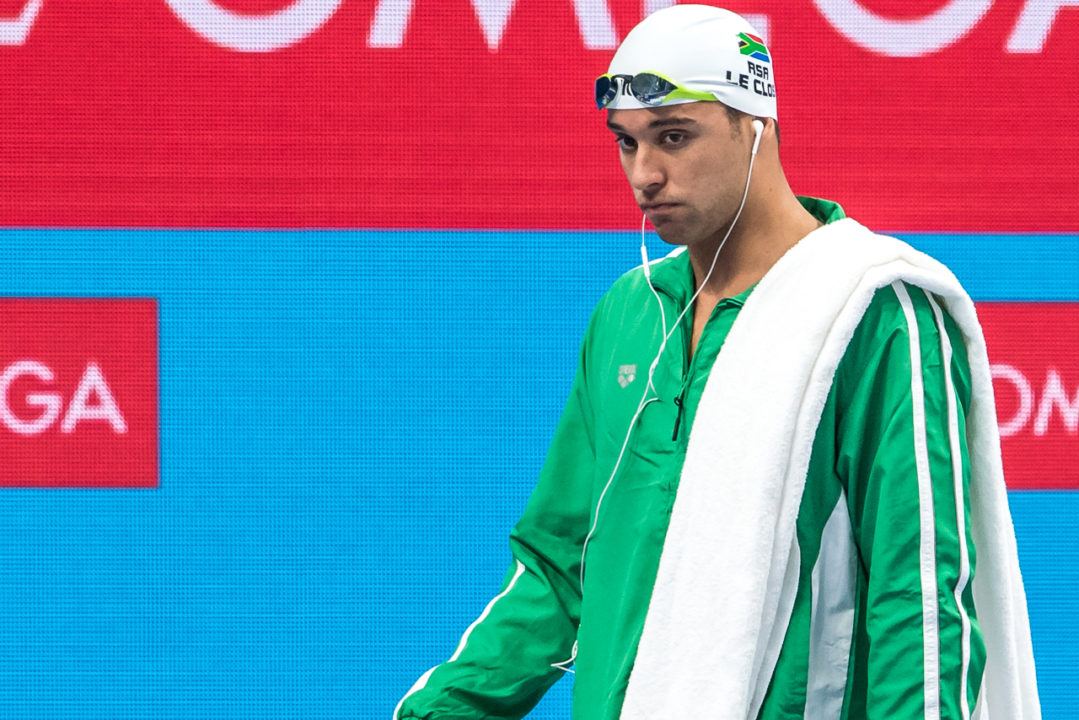 South Africa's Chad Le Clos was the major scratch on day 1 of the 2019 World Championships. He withdrew from prelims of the men's 50 fly. Archive photo via Peter Sukenik/www.petersukenik.com

South Africa’s Chad le Clos has scratched his first individual event of the 2019 World Championships, the men’s 50 fly, on Sunday morning. He didn’t swim that race at the 2017 World Championships either, though he did in 2015 and placed just 14th in the semi-final: his lowest finish of that meet when he won the 100 fly in a new African Record (50.56).

The 4-time Olympic medalist and 14-time World Champion enters the meet nursing a groin injury, though his pre-meet comments show that he’s still confident about his chances for gold – in his primary events.

Le Clos won’t swim any events on the opening day of the championships: South Africa also scratched the men’s 400 free relay. In 2017, they placed 12th in prelims even without Le Clos on the relay. A top-12 finish here in Gwangju qualifies a country for the Olympics in that relay.

Le Clos’ was the most significant scratch upon release of start lists for the first day of the meet.

Doesn’t necessarily mean no swim in Tokyo. They can qualify at another meet.

Anyone have any idea what the US prelim relays will be?

And any idea why they’re seeded at a 3:19 in Heat 1? I suppose that means they’ll have clean water at least.

Ah, that would make some sense. Though the WUGs team just did a 3:11 a few weeks ago.

Will this meet be on tv?

The Olympic Channel has a ton of coverage – you can get it via YouTubeTV (YT may have a free trial right now?)
NBC as well.

Can you also watch it on YouTubeTV if you dont live in the US?

Not sure, but I would check on their site and see what channels they offer in your country. Good luck! 🙂

Set your VPN to Canada and watch CBC