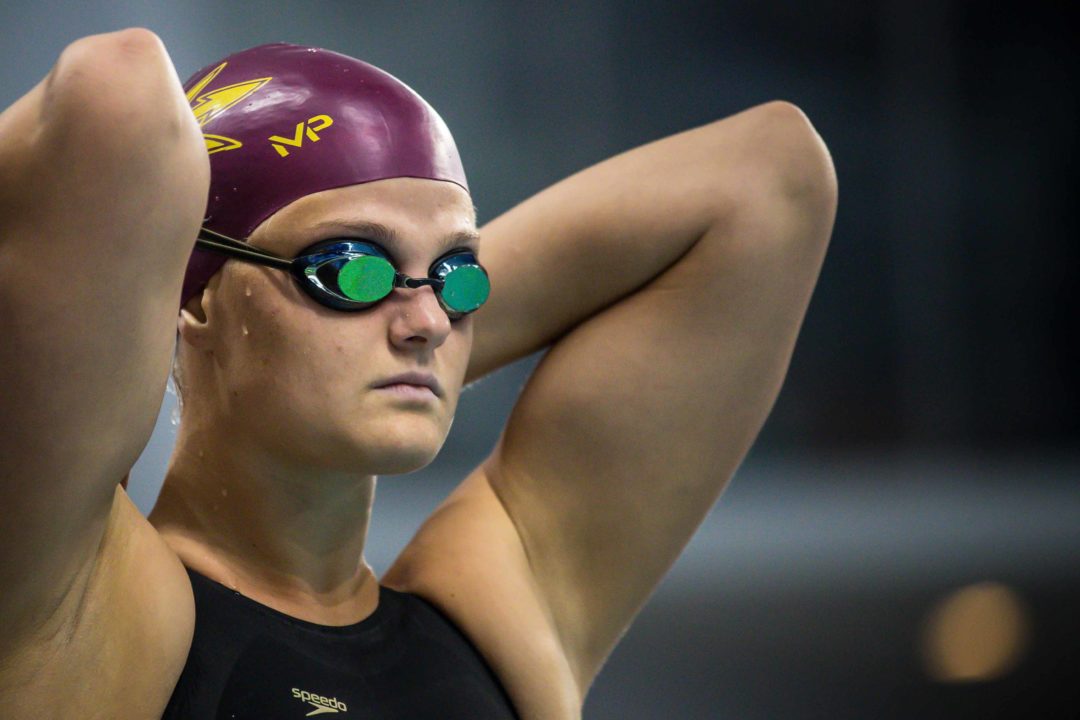 ASU's Cierra Runge was once the NCAA Record holder in the 500 freestyle, but tonight she's looking for her first NCAA title in the event. Current photo via Jack Spitser/Spitser Photography

Tonight is the first full night of finals at the 2019 Women’s NCAA Championships in Austin, Texas. Swimmers are set to compete in the first individual finals of the meet in the 500 free, 200 IM, and 50 free. Tonight’s relay action includes the 200 free relay and 400 medley relay. Divers are set to compete in the 1-meter finals between the end of the 50 free and start of the 400 medley relay.

ASU’s Cierra Runge was once the NCAA Record holder in the 500 freestyle, but tonight she’s looking for her first NCAA title in the event. She’s the top seed for the final. Stanford’s Ella Eastin chases her own American Record and a 3rd NCAA title in 4 years in the 200 IM. The 50 free will feature a battle of the fastest 2 women in history: Cal’s Abbey Weitzeil, the American Record holder and fastest ever, and Tennessee’s Erika Brown, the NCAA Record holder and #2 all-time.

Cal ran away with this one on the back half and obliterated the NCAA Record and American Record by nearly a full second, combining for a 1:24.55. Maddie Murphy got things started with a 21.82, followed by Katie McLaughlin in 21.37. Both of their back-half legs were sub-21, as Amy Bilquist took the lead for the Bears with a 20.87 and Abbey Weitzeil closed in a blistering 20.49.

That split by Weitzeil was the 2nd fastest relay split ever, just 4 hundredths shy of the fastest in history. The fastest ever is Simone Manuel’s 20.45 from last season. That’s also the fastest Weitzeil has ever been on a relay, hinting that she may have a breakthrough in the 50 free and crack her own record tonight.

Tennessee (1:27.31) was out the fastest as they led with Erika Brown‘s 21.35, but Michigan pulled ahead with Catie Deloof‘s 21.59 on the 2nd leg. While the Bears moved ahead for the win on the back half, Michigan held on for 2nd with a 21.44 from Siobhan Haughey on the 3rd leg. Tennessee wound up 6th.

Virginia’s Paige Madden and Stanford’s Brooke Forde were neck-and-neck with 200 to go, but Forde started to pull away across the last 100. She had never broken 4:37 before today, but she’s now an NCAA champion and the 5th fastest performer in history after winning with a 4:31.34. Madden also made a huge drop today, dropping from a 4:38 coming into the meet to a 4:32.98 for 2nd place tonight.

Minnesota’s Mackenzie Padington ran down Cierra Runge (4:35.39) on the back half, clipping her best time from prelims with a 4:35.21. Padington’s time was a new Minnesota school record. The only other woman under 4:36 tonight was teammate Chantal Nack, who was just off her prelims swim in 4:35.88. Nack had also held the Minnesota school record for a short time as she set it in prelims.

Runge was formerly the 5th fastest in history with a 4:31.90 from 2015, and remains 6th all-time after tonight. The top 3 swimmers tonight were the only ones to improve from their prelims times, and are all currently sophomores at their respective schools.

Arizona’s Hannah Cox used her back-end speed to top the B-final field. Before prelims this morning, Cox hadn’t gone a best time in this event since 2015. She snapped her best time in prelims, but blew it away tonight with a drop of nearly 2 seconds in 4:36.04. Rose Bi of Michigan took it out with the lead and held on for 2nd with a 4:37.12. Stanford’s Katie Drabot and Arizona’s Kirsten Jacobsen, both A finalists in this race in 2018, tied for 3rd in the heat at 4:37.87.

Wisconsin’s Beata Nelson pulled off the upset with a huge swim, dropping over a second from her best to become the 2nd-fastest performer ever in this event. Nelson was out quick in 23.94, and used her backstroke speed to move into the lead with a 27.67 split. The work she’s done on breaststroke really paid off, as she continued to pull ahead of Stanford’s 2018 champion Ella Eastin through the back half. Nelson hit the wall in 1:50.79, just a tenth shy of the American Record.

Eastin had outsplit Nelson on the back leg, splitting a 27.07 to outpace her 2018 record split by 4 tenths, but still trailed as she was behind on the fly leg. She wound up 2nd in 1:51.81, holding off Texas A&M’s Sydney Pickrem (1:51.84). Nelson’s swim was the 2nd fastest ever, while Eastin’s swim was the 10th fastest performance in history.

Cal freshman Izzy Ivey was over a second ahead of the rest of the B final field tonight. She broke ahead of the field on the breast split, and continued to build her lead as she closed for a 1:53.87. That was her first swim sub-1:54. She’s now dropped 3 seconds since she officially joined the Bears at midseason.

It’s been 3 years since Abbey Weitzeil set the American Record in this pool. Tonight, she finally broke that record again, along with the NCAA Record. Weitzeil remains the fastest woman in history, taking a tenth off her best in 21.02. She now owns 4 of the 10 fastest times ever. Tennessee’s Erika Brown, who held the NCAA Record before tonight, was 2nd in 21.23 with the 9th-fastest performance in history.

There was just a hundredth between 4th and 5th, as well as 5th and 6th.  Arkansas’ Anna Hopkin touched in 21.51 for 5th, while Cal’s Amy Bilquist popped a lifetime best 21.52 for 6th place. NC State’s Ky-Lee Perry dropped a hundredth off her best time for 7th in 21.57. Freshman teammate Kylee Alons finished 8th tonight in 21.89.

Minnesota’s Sarah Bacon repeated as champion, breaking the NCAA points record with 363.20 points. The former mark was a 361.55 set 12 years ago by Stanford’s Kassidy Krug at the 2007 NCAA Championships. Minnesota has now moved into the top 10, sitting 9th ahead of Texas A&M.

Amy Bilquist took it out for Cal (3:25.24) in 50.84, giving the Bears the lead, but Lilly King roared back for Indiana (3:27.01) with a 55.67. That’s just a hundredth shy of the fastest 100 breast relay split ever, which she set at Big Tens. Cal’s Katie McLaughlin pulled the Bears nearly even with Indiana as she split a 50.00 on the fly. Abbey Weitzeil dove in and immediately took the lead, blowing away the field with her 45.87 anchor split to give Cal the win.

Louisville also got a sub-46 anchor split, as Mallory Comerford (45.96) helped them to 5th place. Michigan rounded out the top 3, with Maggie MacNeil putting up a 50.34 on the fly. NC State took 4th place, getting a 57.37 breast split from Sophie Hansson. Stanford’s Taylor Ruck anchored in 45.80, the fastest anchor split of the field, as the Cardinal finished 6th.

USC won the B heat, with Louise Hansson leading off in 51.04. Texas A&M was disqualified for the Lochte Rule after touching 3rd in the B final.

Is it just me, or is Minnesota the surprise of the meet? Great performance and team efforts. Keep it up ladies!

EVERY. SINGLE. CAL. BEAR. stepped up tonight! Every one! The big names were incredible but you have to take a look at Ema Rajic’s 58.5 split. Maddie Murphy’s 21.8 lead off and 21.91 B final win. Izzy Ivey’s PB. Keaton Blovad’s PB. Phoebe Lemay’s PB. Its was just love.

Stanford 200 Free Relay. 3 Freshman and a Sophomore. They are sitting pretty for a couple years. NCAAs is all about relay points and they will be strong for the next few years with this young speed.

Unless, of course, there are early collegiate retirements in order to turn pro, Olympic sabbaticals or, heaven forbid, injuries. And relays are not the be-all and end-all. Stanford’s four swimmers in the 800 Free relay scored 40 points, and that’s a nice return, but the squad’s four swimmers in the 500 Free scored 41.5. Either way, I suppose, depth kills. Depth also plays a roll outside the lanes. There’s an argument to made that tonight’s MVP for Stanford was diver Haley Farnswort. She was Stanford’s third scoring diver this evening and, even though her 16th place finish only yielded one point, that point was the difference between trailing Cal by half a point, and a crazy celebration poolside when the… Read more »

Am I? Do you think so?? Hmmm…. You think Greg Meehan brought all his divers and left swimmers at home because he’s thinking of next year’s relays???

Is McLaughlin’s 50.0 split on the relay the fastest fly split in the field?

Fastest of the final. Maggie MacNeil was 49.9 in prelims.

Team race separated by HALF A POINT. You LOVE to see it

Mercedes vs Ferrari….then the rest

What is the Lochte Rule in the context of a medley relay? I thought that was just for IM?

Rule also applies to the freestyle leg of the medley relay. You can’t swim the free leg in the manner of the first three strokes. If swimmer during free comes off wall on back and makes a kicking or pull motion before they are past vertical towards breast that would be considered swimming backstroke

What a terrible rule.

Totally agree Barry. Just delete the little clause in FINA rules that states that no stroke may be swum for more than one quarter of the race and we’re good. It’s called the ‘freestyle’ not the crawl and not the ‘not backstroke, breaststroke, or butterfly’. Free the Freestyle! If someone is so good they can win an IM swimming a different stroke on the freestyle leg then good on ‘em. Put swimmers first not the rule makers first.

3
0
Reply
RULES FOR NO REASON
Reply to  Barry

What a TERRIBLE TERRIBLE rule