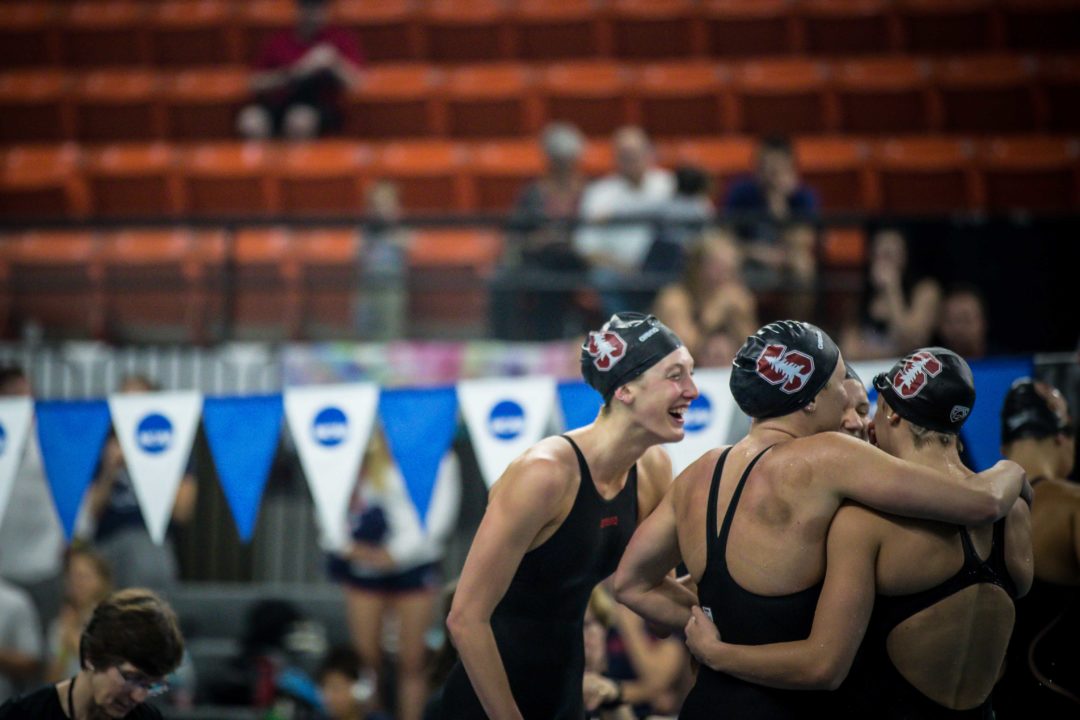 Stanford are the early favorites next year. A look at the field behind them. Current photo via Jack Spitser/Spitser Photography

2019 W. NCAAs Predictions: How Did The Comment Section Do?

Looking back at the leadup to the 2019 Women’s NCAA Championships, we want to see where the “buzz” of the SwimSwam comment section was onto something… and where it wasn’t. How did your predictions fare? We track the results here.

The Stanford women defended their title this weekend, but the meet was much closer than their last two title wins. However, the closer final margin is not an indication that Stanford’s run at the top is coming to an end.

NCAA’s is a meet dominated by upperclassmen. 67% of this year’s individual points were scored by juniors and seniors. Sophomores scored only 16% of the points, and freshmen scored 17%.

The other two top ten classes? #1 the Stanford freshmen 127, and #10 the Stanford sophomores 69. That means not only will those classes be around for years to come, but as when they become juniors and seniors their point totals should improve.

Stanford return 233.5 individual points, 90.5 more points than next best Cal who return 143. The third best returning point total belongs to Virginia who return 104. Next best are Minnesota with 94, Tennessee with 85, NC State with 82.5, Michigan with 74, and Kentucky with 72.5.

One of the best metrics for predicting the next season’s championships is a re scoring of the NCAA meet with the seniors removed. In such a re scoring, Stanford score 359.5 individual points, 166.5 more than next best Cal who score 193.

In contrast, Cal only return 10 swimmers that even participated in this year’s meet.

Another team that greatly benefits from the re score with out the seniors is Georgia. Georgia return 49 individual points, but in the no seniors re scoring they return 100. With the expected return of this year’s #1 recruit Eva Merrell, Georgia could return to their normal place near the top of the division next year.

The no seniors re scoring points to a wide open race for 3rd next year 4 teams are within 19 points. Virgina have 139, NC State 127.5, Tennessee have 120, and Minnesota have 120 (This over rates Minnesota slightly. Most of their returning points are from divers and a distance swimmer. Both things that don’t translate well into relay points).

This year’s top Big 10 team’s are both way down in the returning points standings. Michigan return the 7th most individual points, but in the no seniors re scoring they fall to 11th. Indiana have only 55 in the no seniors scoring, the 21st most, and 5th among Big 10 teams (also only 5 more than Purdue).

This year’s 4th place team Louisville is also way down in the returing points standings. The Cardinals have the 17th most no seniors points.

Below are the returning points totals for each team and below that is an event by event break down for every returning nationals swimmer and diver.

Hey if the LADY VOLS can have a couple of the gals improve like Erika Brown did her sophomore year – TENNESSEE girls will certainly jump into the top 3 atNCAAs? I say heck yes they will – expecially if they wear those really cool looking Porcupine/Coonskinned Hats!

I know I’m slow, but what’s the difference between returning points and “no senior” points?

I had to do a double take as well. Returning points is points from all juniors, sophomores and freshmen. No Seniors points is rescoring the 2019 NCAA meet as if there were no seniors.

Y’all aren’t resting on your laurels, are you? Your meet coverage was absolutely superb, and now all this post-meet data analytics… Makes a swim nerd incredibly happy. Thanks swimswam!

Wish there was better network TV coverage and the internet feed was terrible. Not sure who to blame there, but NCAA and USASwimming better get going! Other sports are leapfrogging swimming.

Don’t forget that Stanford had two Additional swimmers who qualified for the 2019 NCAA, but were not taken, because of the Maximize team size rule. Yes, continue to Fear The Trees for a few more years.

Thought it was a single, collective tree?

If some swimmers (Weitzel, Ruck, Brown) take off next season to train for the Olympics, the math could easily change. 2020 prediction based on incoming recruits:
1. Stanford
2. Virginia
3. NC State

Factor in pro prospects after the olympics and incoming recruiting classes, could there possibly be a challenge to Stanford in 2021,2022? I believe their is a possibility.

Excited to see how Virginia’s next 2 incoming classes propel this program even further.

GREAT article – can not wait to see the MEN’s NCAA 2020 projection!