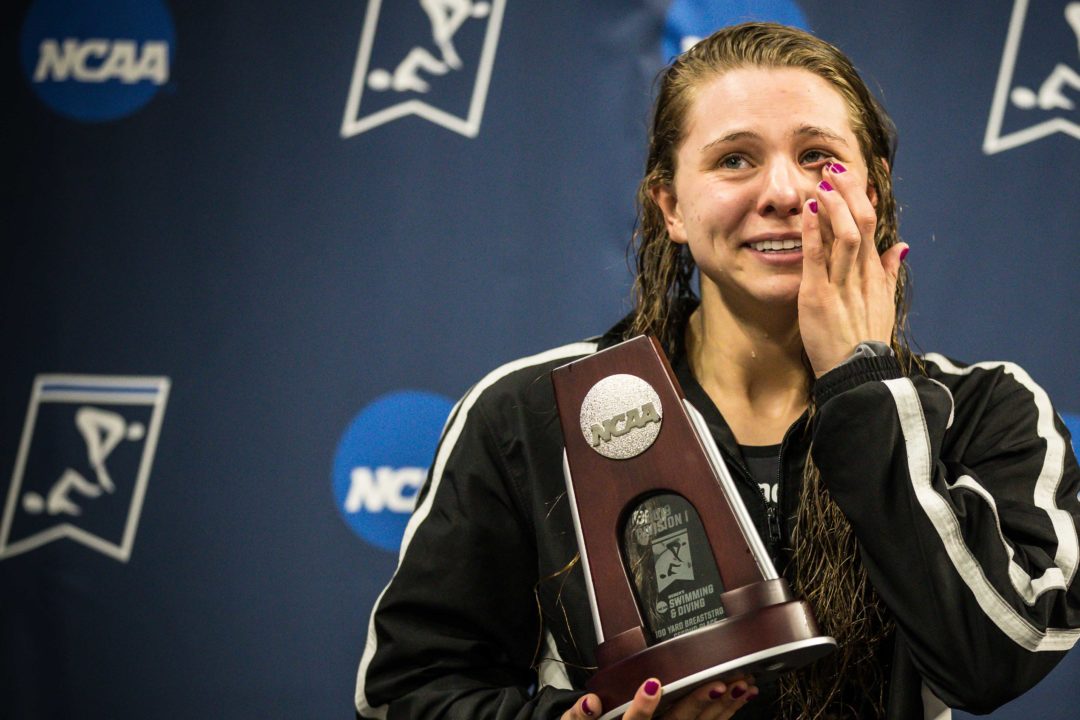 Duncan finished 2nd in 57.83, making her the 10th fastest performer in history. That was EMU’s highest finish in program history Current photo via Jack Spitser/Spitser Photography

Indiana’s Lilly King was way under record pace at the 50, splitting a 25.98. She continued to dominate on the 2nd 50, breaking her American Record by just over a tenth in 55.73. That’s the 2nd time in history we’ve seen a sub-56, as King first broke the barrier at the 2019 Big Ten Championships last month. King now owns 9 of the 10 fastest performances ever. Fellow Rio Olympian Molly Hannis is the only other person remaining on that list at #7.

Eastern Michigan’s Delaney Duncan moved ahead of NC State freshman Sophie Hansson and Minnesota’s Lindsey Kozelsky on the back half. Duncan finished 2nd in 57.83, making her the 10th fastest performer in history. That was EMU’s highest finish in program history. Hansson, the ACC Champion and 7th fastest all-time, was just over a tenth shy of her best to take 3rd in 57.90. Kozelsky, who was #10 on the all-time top performers list before Duncan bumped her out of the top 10, finished 3rd tonight in 58.09. She was out in 26.95 to challenge for 2nd, but lost some steam coming home.

There were 3 freshmen from the ACC in tonight’s final. Florida State freshman Ida Hulkko, who broke 59 for the first time this morning, dropped a few more tenths off her best to take 5th in 58.58.Virginia freshman Alexis Wenger was a few tenths shy of her best to take 6th in 58.64.

i drive my kids to swim practice on EMU’s campus all the time. Not sure what her case was but students walk out in front of cars constantly on their campus.

Congrats to Delany on an amazing NCAA career! I know she said she’s retiring in the video, but She should go to Indiana to train with their breast stroke group

They don’t know how to drive out in Ypsilanti. 57 is lightning quick way to ball out on the big stage!

Best wishes to whatever she does next!

Dunc is a straight beast, no two ways about it.

I agree, thanks SwimSwam for letting her get some stage-time!